It's part of an effort to prevent "vaccine tourism."

TAMPA, Fla — Editor's Note: This story has been updated now that an order has been issued by the state.

It's part of a larger effort to combat what's been dubbed "vaccine tourism" – where people have been traveling to Florida to get vaccinated, taking away doses from those who call the Sunshine State home.

Dr. Scott Rivkees issued the health advisory on Thursday. It requires all vaccine providers in the state to ensure recipients of the first dose of the vaccine are either residents of the state or health care providers in Florida for the purpose of providing care to people who live here.

"If you have people coming from out-of-state who aren't residents, who are taking those vaccines, it's going to give us an overestimation of the number of Floridians that have been vaccinated, and give us a false sense of security," said Dr. Tom Unnasch, professor at the University of South Florida. 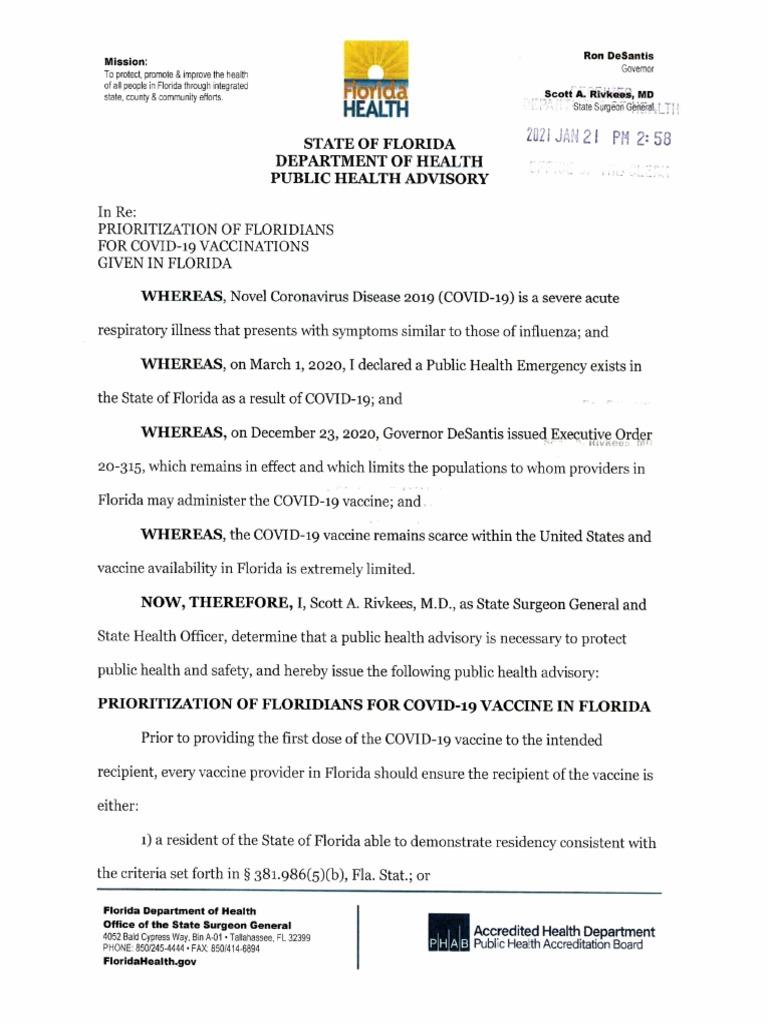 The coronavirus vaccine rollout around Tampa Bay has been anything but easy. From waiting lists to sporadic vaccine shipments, thousands of people living in Florida are struggling to get the shots.

Up until now, they may have been facing one more hurdle, as people traveled from other states and countries to get vaccinated here in the Sunshine State  – taking away supplies.

According to the Florida Department of Health, of the 1.1 million vaccines distributed in the state so far, more than 39,000 have been given to people from outside the state.

Florida Gov. Ron DeSantis said the vaccine should be going to people who live here, including seasonal "snowbirds," not those visiting from other places. He did however originally downplay reports of the vaccine drawing in tourists, CBS reported.

State leaders and others who call Florida home were worried that these travelers were taking away from Florida's already-limited supply. In an interview with CBS, Miami Mayor Francis Suarez suggested a system of verifying people's addresses to make sure they are from the community.

International travel agencies had reportedly been going so far as to promote vaccine travel packages, with a guarantee of a COVID-19 shot included in the price of the trip.

Medical tourism expert Glenn Cohen feared this was creating a division, where wealthy and able-bodied people had better access to the coronavirus vaccine because they could pay to travel for it, CBS reported. He added that with every country on a different timeline for the vaccine rollout, people would continue to travel to where they could get the shot faster.

Concerns about vaccine tourism had already prompted some Florida communities to require you to show ID and bring proof, like a utility bill, that you were at least a part-time Floridian. According to Census data, nearly 100,000 people come to Sarasota County to stay for the winter.

"They are our community members. Ya know, they eat in the same restaurants, shop in the same stores, and live in our community just as we do so those people are coming in to get their vaccine just as they should," Sarasota Department of Health Sarasota Spokesperson Steve Huard told 10 Tampa Bay prior to the announcement from Dr. Rivkees.

Huard said if people could not prove they lived in Sarasota at least part-time, they would be turned away, even if they had a vaccine appointment. Now, that's basically the rule statewide.

CBS News contributed to this report.