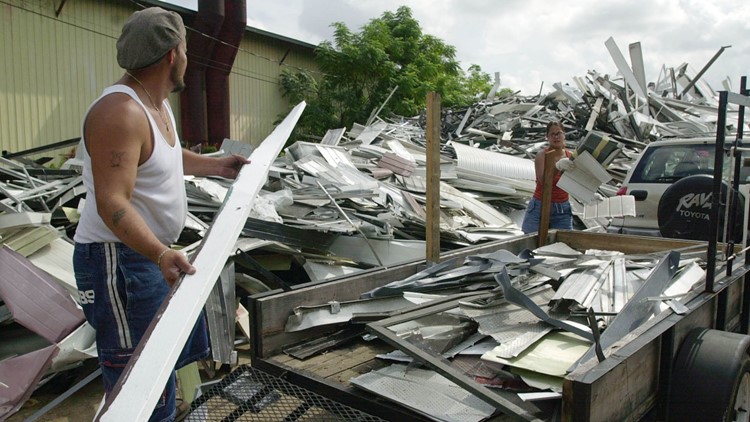 Photo by: AP
Two people pick up debris in the aftermath of Hurricane Charley in 2004.

15 years ago today: Hurricane Charley made landfall in Florida

Hurricane Charley was the first of four hurricanes to impact or strike Florida in 2004. The others were hurricanes Frances, Ivan and Jeanne.

A National Oceanic and Atmospheric Administration report says Charley formed as a tropical depression on Aug. 9, 2004, about 100 miles south-southeast of Barbados. Two days later, Charley became a hurricane as it approached Jamaica.

Eventually, Charley strengthened to a Category 4 hurricane on the Saffir-Simpson Hurricane Scale. Its peak intensity had 150 mph winds.

According to NOAA’S report, Charley’s eye shrank considerably in the 12 hours before landfall in Florida.

Charley made landfall on the southwest coast of Florida near Cayo Costa, just north of Captiva, on Aug. 13, 2004. The storm’s eye passed over Punta Gorda and the eyewall struck that city and nearby Port Charlotte.

The hurricane then moved north-northeastward across the central Florida peninsula. On Aug. 14, 2004, the center passed near Kissimmee and Orlando. Winds had decreased to about 86 mph at this point, according to NOAA.

Charley was still considered a hurricane with maximum wind speeds of 75-80 mph when it moved off the northeast coast of Florida near Daytona Beach on Aug. 14, 2004.

Hurricane Headquarters: How to check your supplies, evacuation zones