Amid COVID-19, Floridians are split on whether to follow hurricane evacuation orders, survey says

A University of South Florida emergency preparedness survey shows the coronavirus is impacting how Floridians are preparing for and will respond to a hurricane. 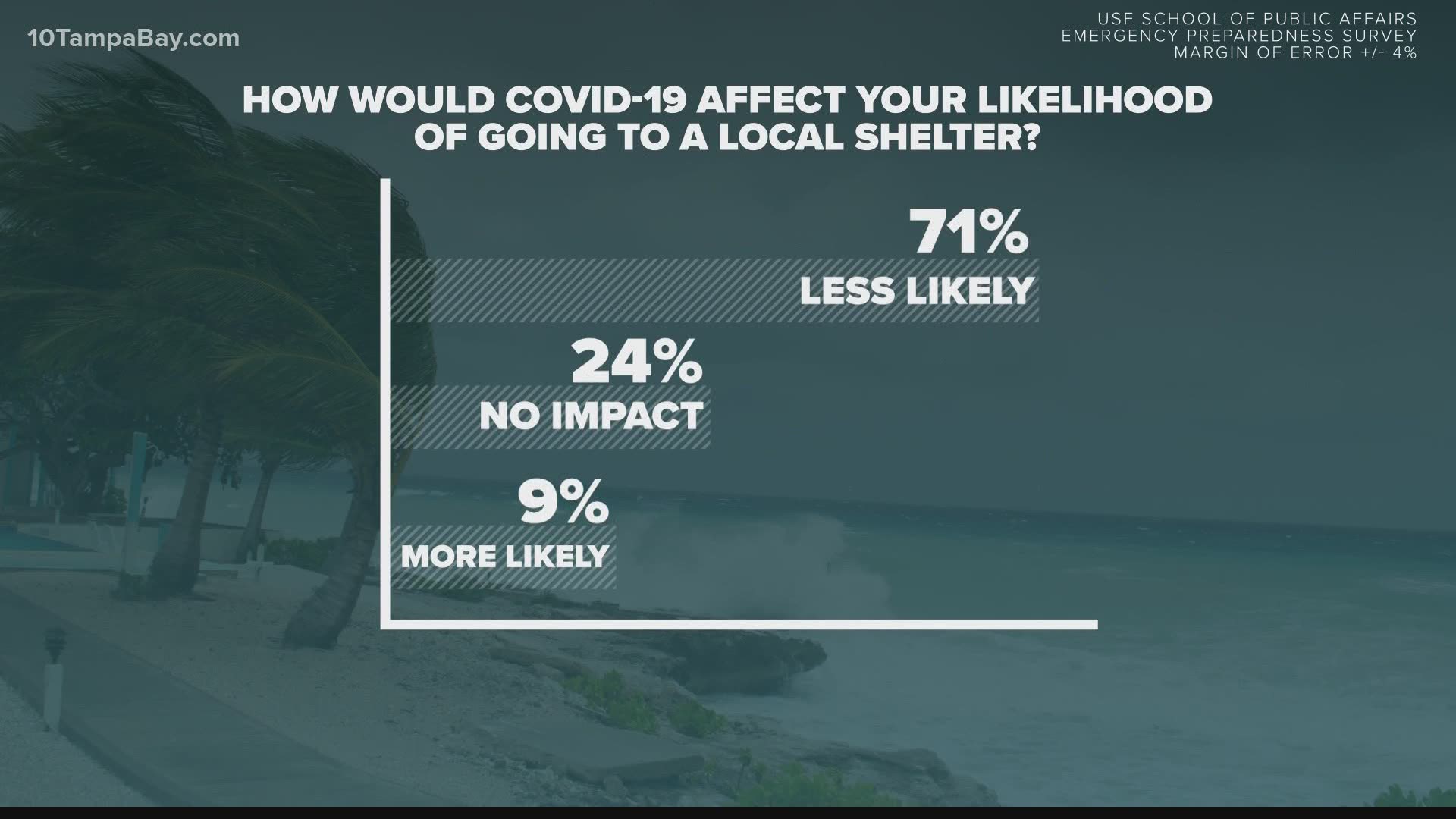 ST. PETERSBURG, Fla. — With hurricane season happening in the midst of the COVID-19 pandemic, a majority of Floridians say they’re less likely to go to a shelter, split on whether to follow evacuation orders, but overall have a plan in place.

That’s according to findings in the statewide University of South Florida emergency preparedness survey released Wednesday on how COVID-19 is impacting hurricane readiness.

The findings come from the responses of 600 Floridians from across the state surveyed between July 30 and Aug. 10.

Most Floridians are less likely to go to a hurricane shelter due to COVID-19.

“We’ve been talking about alternative means of shelter, using hotels or classrooms in the case of a hurricane, so that did not surprise us,” Remington said.

Despite COVID-19, Floridians are as or more prepared for an emergency

“What did surprise me and our research team was that even though we have economic hardships and high unemployment, only about 15 percent of Floridians said they were less prepared for a disaster,” Remington said.

“But when you think about it, it makes sense,” Remington said. “These past few months of staying at home, most people already have food, water and medication and there’s a lot of overlap with hurricane preparedness and self-quarantine.”

Floridians are split on whether to follow voluntary evacuation orders

In a coastal county like Pinellas, this is cause for some concern, said spokesperson David Connor.

“That’s always troubling to see because we issue evacuations orders based on the forecasted storm surge, the leading cause of death in hurricanes,” he said.

RELATED: Evacuating because of a storm will have an impact on the spread of coronavirus

Most Floridians have enough to get by in days after storm

A large majority of respondents said they could manage for three days without assistance if a hurricane left them without water and power.

“Which is good, it’s consistent with our message,” said Polk County’s Emergency Management Director Paul Womble. “I think generally folks in Florida know they have to have a plan.”

Financially speaking, the situation appears a bit more serious. Roughly 35 percent of Floridians surveyed said they have less than $1,000 to cover unexpected emergency expenses, while 9 percent said they have no money at all available.

Half of Floridians say they have an evacuation plan, but just 41 percent said they have a stocked emergency kit in case of a forced evacuation.

“I think people are ready to stay home, they’re ready to be more self-reliant, but they’re not necessarily taking the precautions that those of us in emergency management wish they would,” Remington said.