Biologists trying to save underwater memorial from damage

Dr. Heyward Mathews has spent over six decades diving in Tampa Bay. He's worried about the safety of a new dive memorial after buoys keep disappearing 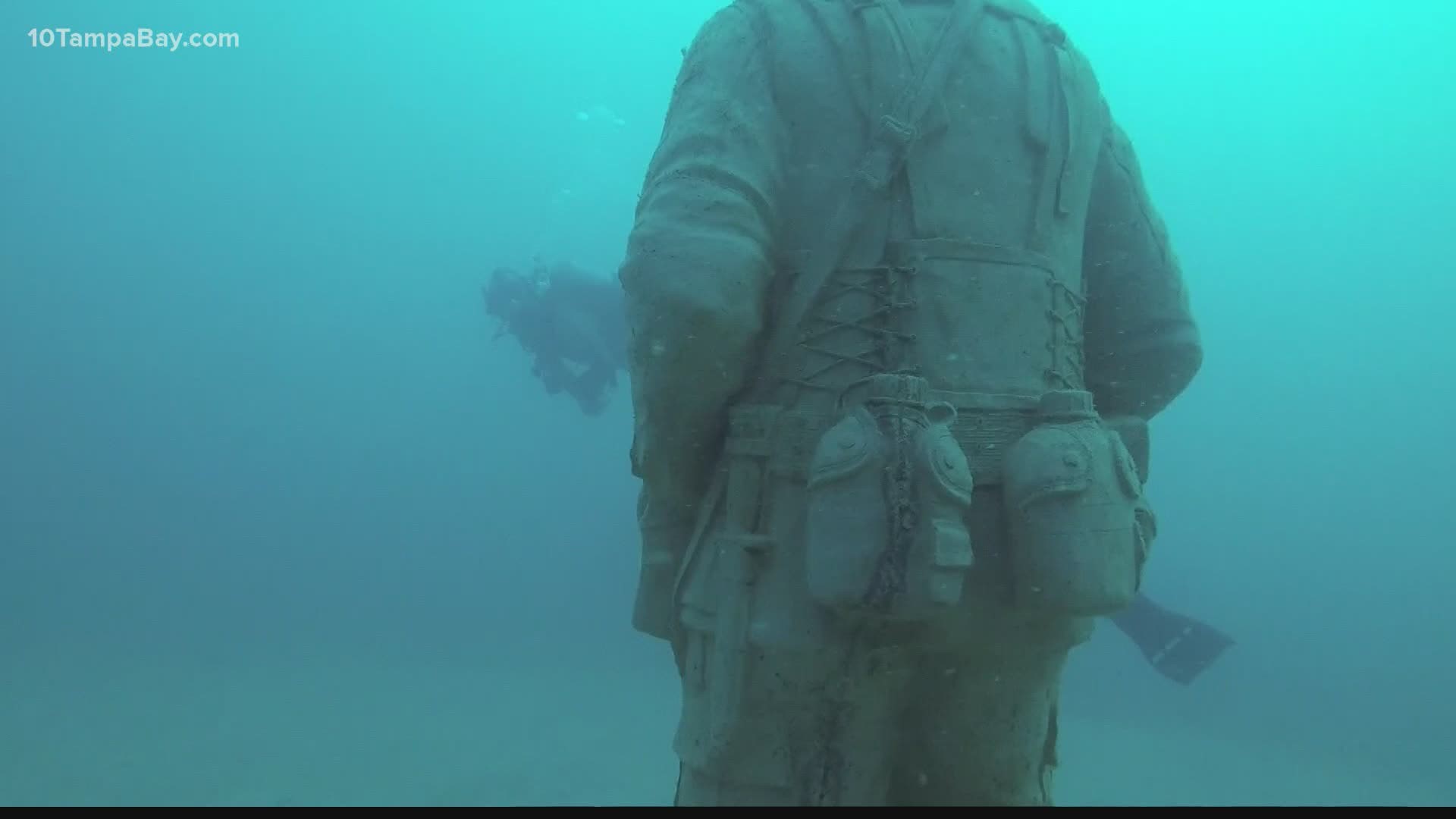 He blew an engine on the trip back in to land. That means he wont’ be visiting Clearwater’s Circle Of Heroes again until he can get his vessel repaired. He wants to get back to fix a problem he’s noticed won’t go away.

“Thirteen,” he said on a video call Wednesday morning when asked how many buoys have gone missing from the site.

He’s replaced most of them himself. The buoys are used to mark the 42-foot deep dive site and keep safety protocols in place for both divers and the statues. Without them, divers could get hurt and the dozen statues, which are about $15,000 apiece, could be broken.

“I’m really worried that we have to give up on the buoys it’s just going to be a matter of time before some of these big dive boats start dropping anchors on statues and braking a rifle loose or break the head off or something of that sort,” said Mathews.

The Circle Of Heroes has drawn divers from around the nation. A group of veterans traveled from Arizona in June to clean them.

It’s a dive location that has become special to local veterans and civilians alike.

Mathews just wants to see it kept in working order.

“It’s a good 300 yards away from the main part of Veterans Reef and the whole idea was to avoid any conflict between the divers and the fishermen,” said Mathews, who has spent nearly six decades designing man-made reefs to attract fish. “It’s really hurting the divers.”

“I’m totally at a loss. I have no idea if it’s just one person who is disgruntled for some reason or more than one. It’s always happening when there are no boats out there, he said.

In Mathew’s estimation, those 13 buoys have either been detached, cut loose, or taken outright since the Circle of Heroes was installed. The last three have not returned. He only has one spare left.

"Veterans have given so much to us. It doesn’t seem too much to ask to just leave our memorial alone,” said Mathews. “There’s nothing I can do to keep them from cutting the rope. It is terribly frustrating because, number one, we put them out there for the convenience of the divers.”

Mathews has tried to recover buoys by writing his contact information on the sides. To this point, neither Mathews, nor anyone else connected to the Circle of Heroes project, has filed formal complaints with Pinellas County or the Coast Guard. Because of the location of the memorial, ten miles off the coast, it’s questionable as to which agency would be best to field a problem like this one. Mathews says it’s a federal offense to tamper with a buoy if it’s set in place by the Coast Guard.

It costs hundreds of dollars to replace them, not to mention the cost of oil and fuel to get a boat to the site.