Josh Grzywa and the Deep Sea Valkyries scrubbed the 12 life-sized statues on Wednesday. The dive site is the first underwater dive memorial in the United States. 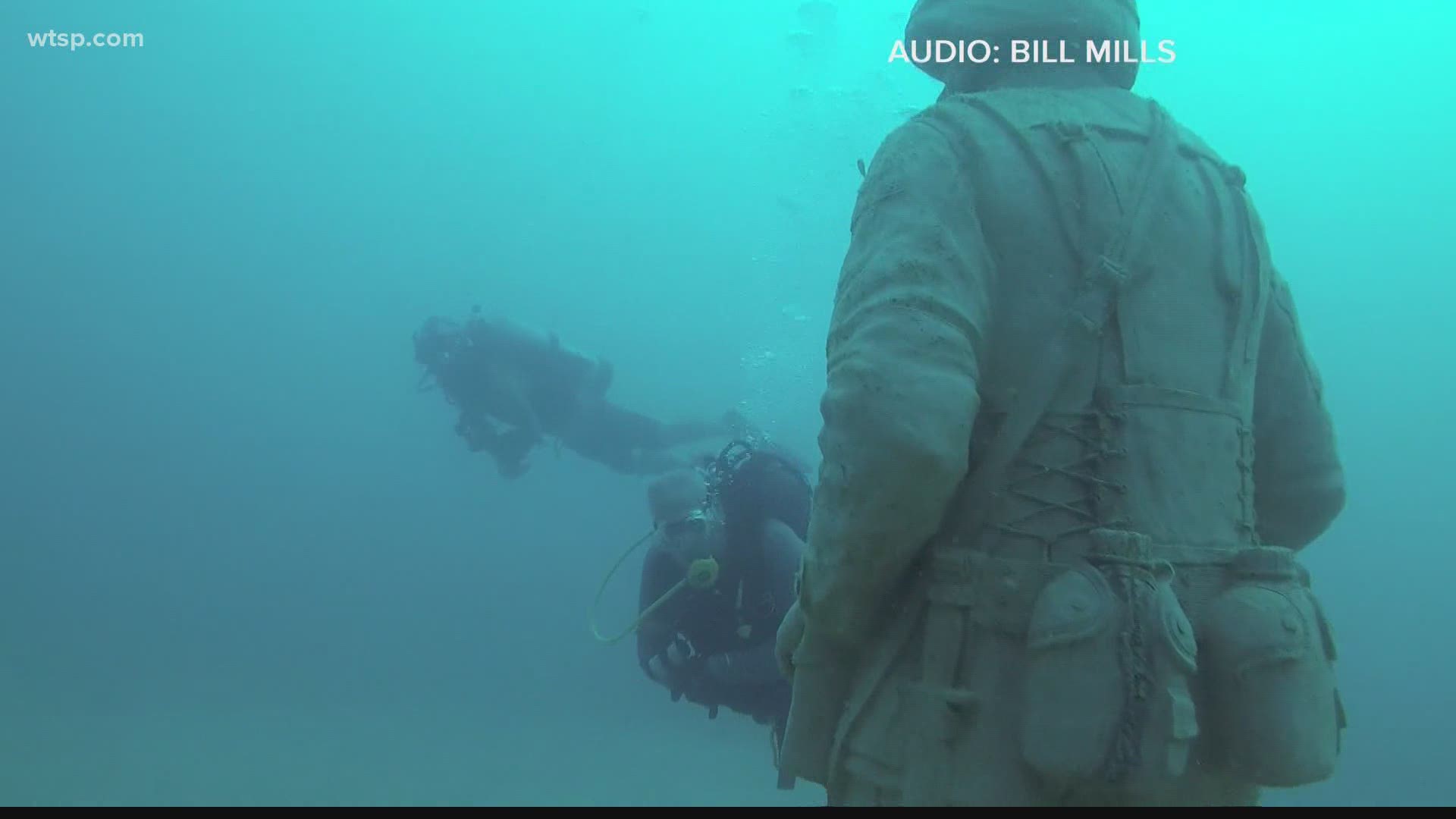 CLEARWATER, Fla. — Josh Grzywa’s first trip to see the Circle Of Heroes wasn’t for leisure. He was on a mission to preserve patriotism.

“I think anytime you see a memorial that is dedicated to any veteran there is a great sense of honor,” the 15-year veteran said. “I think most veterans feel like they don’t deserve a memorial. We did a job that we absolutely love to do it and we’d do the job all over again if we could.”

Grzywa, who lives in Phoenix now, served from 1999 to 2014 as a U.S. Army infantryman. He served two deployments in Iraq after being based in Germany. His uncles served and his brothers-in-law served.

“There’s something mysterious about being down there,” he said. “As you come up to one of these statues they almost appear out of the murkiness of the water.”

A team of eight divers descended 40 feet to the floor of the Gulf of Mexico to clean the military statues. The veterans used soft and wire bristle brushes to scrub the life-sized figures depicting service members and their military nameplates. It took a team of eight divers more than 16 combined hours of work to beautify the statues.

Sam Craig also made the dive. It was his first dive ever after being certified a month ago.

“I’m pretty excited about it,” he said. “Being underwater, that’s just fantastic.”

The site has drawn plenty of interest from divers and veterans groups. Grzywa is part of the Arizona-based Deep Sea Valkyries, a non-profit organization that works to enhance the lives of veterans through the treatment of post-traumatic stress disorder by introducing them to activities like scuba diving.

“You were just grateful to be able to do that,” Grzywa said. “Since my time in the military, conservation has become a huge part of my life and something I’m very passionate about. We can preserve those nameplates as well and I think that is going to be one of the things that really outlast the intricate details on those statues.”

The 12 statues are located roughly 10 miles off the shore of Clearwater. The statues represent the men and women serving in the United States Air Force, Army, Coast Guard, Marines and Navy.

It was a beautiful site for Grzywa to see.

“Coming from Arizona, we don’t have something like this obviously so this is a treat for us. Hopefully a couple times a year will be able to make it back out here,” he said. “Just like veteran serve they are country, these the statues do you they are going to serve the St Pete area and they were going to serve the ocean well.”