Brandon Lang qualified for the USA Games next June. He will compete with a heavy heart after his dad, Ben, died just before Christmas. 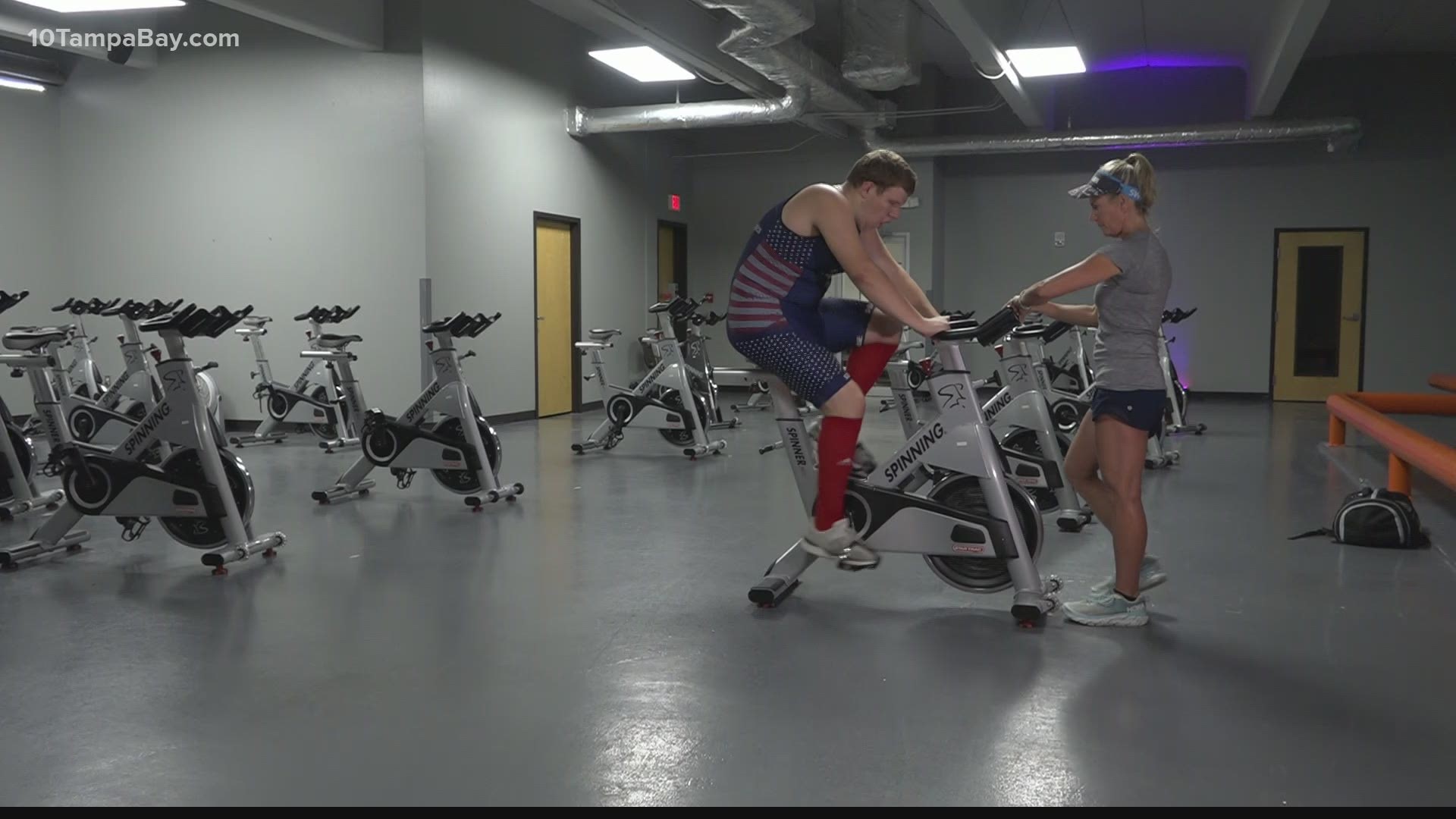 LAKELAND, Fla. — Brandon Lang had never even thought about trying to run a triathlon before this year. He was much more interested in softball and basketball.

But, there he was, under the blazing June sunshine, sweating and grinding his way towards the finish line of his first triathlon.

It was difficult, but he finished.

“Brandon has trusted me from the beginning, which is really important,” said his trainer, Lori Campbell. “I see so much potential in him when I’m with him and I just want to help him discover that potential.”

Lang, 24, wasn’t going to allow himself to quit before that finish line. He was determined. He was fueled by the loss of his father, Ben. The man who taught him to swim died in December from brain cancer just days before Christmas.

“He’s probably looking up there from Heaven, where God lives,” said Lang. “We would be proud of me.”

Lang is on the high-functioning end of the autism spectrum and has always been into sports. They became a passion of his at an early age. He excelled at softball and even participated in the Eastern USA championship with his local team made up of special needs players from Lakeland in 2017. Three years before he would represent the Southeast in a weightlifting championship.

“I know his father would be so proud of him,” said his mother, Dana Peers. “They loved their basketball games. They loved signing. They loved going out to eat and just spending time together.”

Lang ran his first triathlon in June and finished in just over two hours. The event required participants to complete an 11-mile bike ride, a 5K (3.1 mile) run and a quarter-mile swim. He was paired up for training with Campbell in February. Four months later, she completed the triathlon course at his side.

“I lost my father as well,” said Campbell, who has also completed multiple triathlons. “We’ve talked about it. We’ve talked about how inspirational they have been to both of us and how sports-minded there were, as well. It’s been a good bonding experience for us.”

To advance to the Special Olympics USA Games, athletes have to qualify by performing well in lower-level events. In May, Lang had to qualify by finishing a mock triathlon at Lake Louisa. He was then admitted to June’s summer sprint triathlon. His high performance then gained him entry to the USA Games.

He’s been to states for softball and swimming. The USA Games is the highest level of Special Olympics competition.

“I’ve been dreaming of going to the USA Games for a long time,” said Lang.

The 2022 Special Olympics USA Games will be played June 5-11 in Orlando.

Lang found out he’d made the field of over 5,500 athletes during a video conference call last week. Over 20,000 volunteers will make the event flow smoothly, assisting athletes in many different sports from swimming, running, weightlifting, bocce, bowling and more.

For Lang, it will be a special opportunity to honor his dad.

“I’m excited. It’s my first USA Games. I’ve never actually been to the USA Games in my life,” he said while pedaling away on a stationary bike at the local Lakeland YMCA, where Peers teaches swim classes.

A cross necklace containing some of Ben’s ashes dangled from Lang’s neck during his June triathlon. It was important for him to carry it during the competition.

“I wanted everybody to know that I always have him with me,” he said.

He removes the necklace for swimming events but plans to wear it again in the USA Games. Until then, he’ll continue to train. He plans to run another triathlon in July. He practices the running, swimming, and biking disciplines with Campbell at the YMCA weekly. He’s even altered his diet.

“I need to eat more turkey burgers,” he said.

Healthy fuel is great. Emotional fuel may be even more effective.

“It keeps the memory of his dad alive,” said Peers.