The court has granted a temporary injunction and declared "unconstitutional" parts of Florida's emergency order to reopen schools. 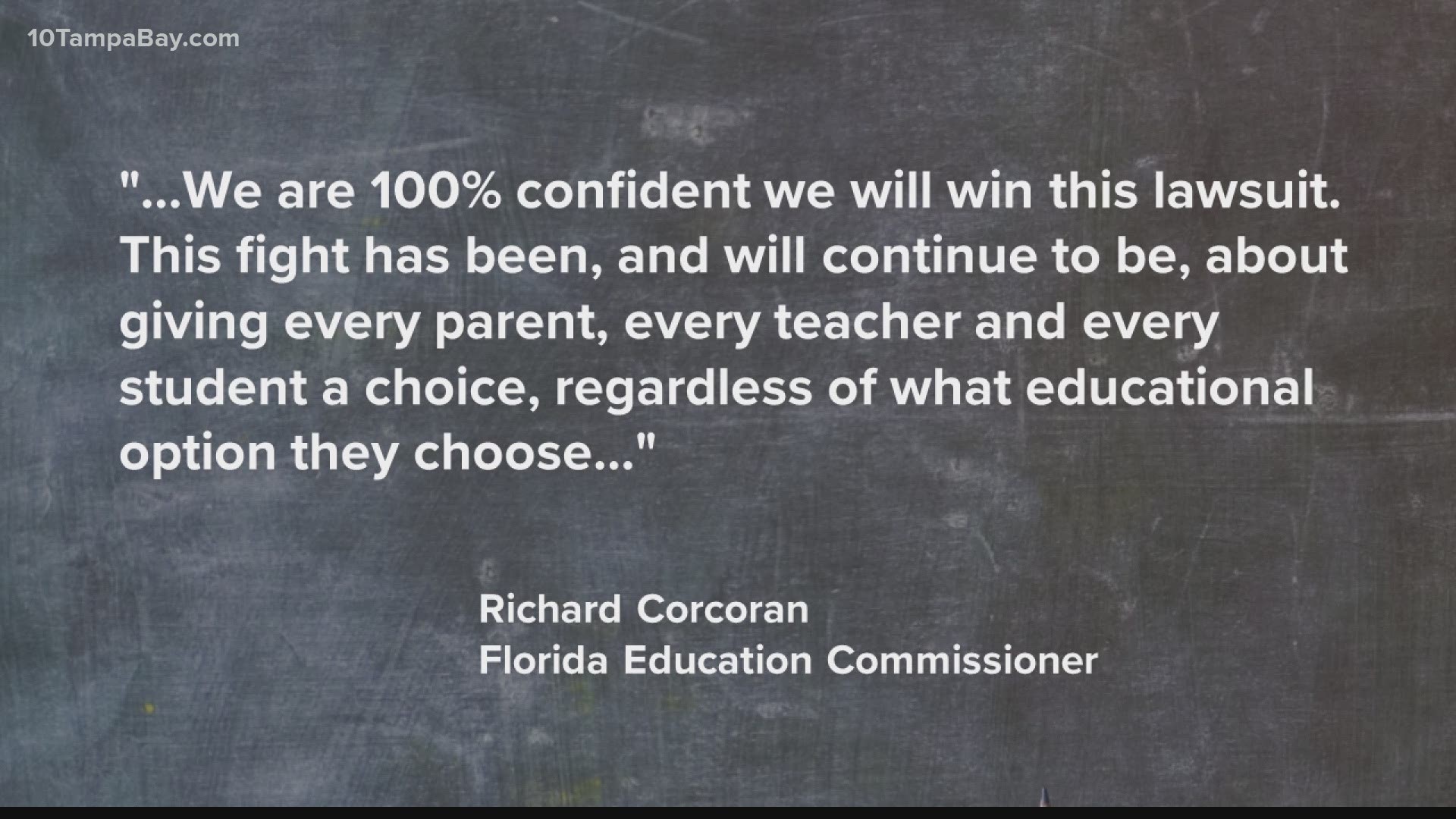 LEON COUNTY, Fla. — A judge has sided with Florida's largest teachers' union in its battle with the state over school reopening plans.

"You lost today Mr. Commissioner and Mr. Governor because you're wrong. We won because we're on the side of right. The side of right about public health and public safety," Florida Education Association President Fedrick Ingram said.

"Districts’ hands will not be tied as we continue the fight to protect students and educators in our public schools," the FEA wrote in a statement.

The court's ruling and injunction means local school boards around Florida can "make safety determinations for the reopening of schools without financial penalty," the order reads. Though the majority of school districts around the state have already reopened in their respective formats, the FEA said the ruling means districts can revisit other plans if needed to ensure the safety of students and teachers without the fear of losing state funding.

During a Zoom news conference on Monday, Ingram said the court's ruling "proves that we do not have safe and secure public schools for our children to learn (and) our teachers to teach."

Dodson wrote in his ruling that the defendants – Corcoran and Gov. Ron DeSantis – "have essentially ignored the requirement of school safety by requiring the statewide opening of brick-and-mortar schools to receive already allocated funding."

"Shame on our governor and our commissioner of education," Ingram said.

The FEA has been suing Corcoran and DeSantis over the emergency order issued in July that mandated all schools open their doors by the end of August. The lawsuit aimed to stop the order to reopen physical classrooms five days a week.

On Monday, the court ruled the order was "unconstitutional to the extent it arbitrarily disregards safety, denies local school boards decision making with respect to reopening brick and mortar schools, and conditions funding on an approved reopening plan with a start date in August."

"Schools will still reopen where it is safe, as many have already done," Ingram said. "It is now in the control of the superintendent, the school board, the local unions...all those stakeholders to make the right decision to reopen schools."

Attorneys with the FEA argued the executive order violated the Florida Constitution because they say it does not promote a "safe" and "secure" school system due to the coronavirus pandemic. The suit sought to allow local districts to make the best and safest decisions on reopening physical campuses, without the threat of funds being withheld by the state.

Attorneys representing state leaders in favor of the emergency order had argued that 1.6 million Florida students had asked to return to in-person learning and the Florida Constitution requires school districts to offer that option.

"You can't replace safety with politics," American Federation of Teachers President Randi Weingarten said. "That's exactly what Ron DeSantis and (Richard) Corcoran did here. They took money away like they did in Hillsborough."

“We’ve said it all along, and we will say it one million times – we are 100% confident we will win this lawsuit. This fight has been, and will continue to be, about giving every parent, every teacher and every student a choice, regardless of what educational option they choose. If you are one of the 1.6 million students who have chosen to return to the classroom, a parent, or a classroom teacher that wanted to educate their student in person, we strongly encourage you to call the Florida Education Association and tell them to drop this frivolous lawsuit.” – Florida Education Commissioner Richard Corcoran

10 Tampa Bay has reached out to DeSantis' office and will update this story when we hear back.

RELATED: Teachers' union puts Hillsborough school board member on the stand in lawsuit against state

Hillsborough County Schools and the district's compromise were a big part of the arguments in the FEA lawsuit against the state and were detailed in the court's order issued Monday.

During virtual hearings, the teachers' union and the attorneys for Corcoran and DeSantis called on representatives from Hillsborough County to testify on their behalf.

School Board Member Tamara Shamburger spoke in support of the FEA and detailed the board's decision-making process when it first voted to go online-only for the first four weeks of the school year. Then, attorneys for the state had a Hillsborough County teacher testified in support of in-person learning.

After the court's ruling on Monday, Hillsborough Schools sent the following statement:

“At this point, my primary focus has been launching the school year. Today was the first day of our Smart Start Week, and it was a very successful day. I had an opportunity to interact in virtual sessions with teachers and students and see rich conversations about how we will leverage our curriculum, and how we will move forward with the implementation of new safety protocols. At this time, we are slated to open on August 31 to provide parents within our community choice.” -Superintendent Addison Davis

"We are reviewing the order and its implications for our district. There is a chance the order will be appealed and we are continuing to monitor the progress of the lawsuit. We anticipate the School Board will discuss this tomorrow but no vote is expected at tomorrow’s meeting."

School boards around Florida can make locally-based decisions about when and how to reopen their districts without suffering any loss of state funding, according to the FEA and the judge's ruling.

Though most school districts in the state have reopened under their Department of Education-approved plans, the FEA said the court's order allows safety-based decisions to be made at the local level.

The FEA was specifically asked about Hillsborough County and if the district would be able to go back to the board-approved plan of remote learning for a month. Ingram said he doesn't speak for the county or the school board, but said he and his team are urging them to revisit that plan and continue reopening schools with the guidance from local health officials.