The Florida Education Association is suing Gov. DeSantis and the Florida Department of Education over the executive order requiring schools to open. 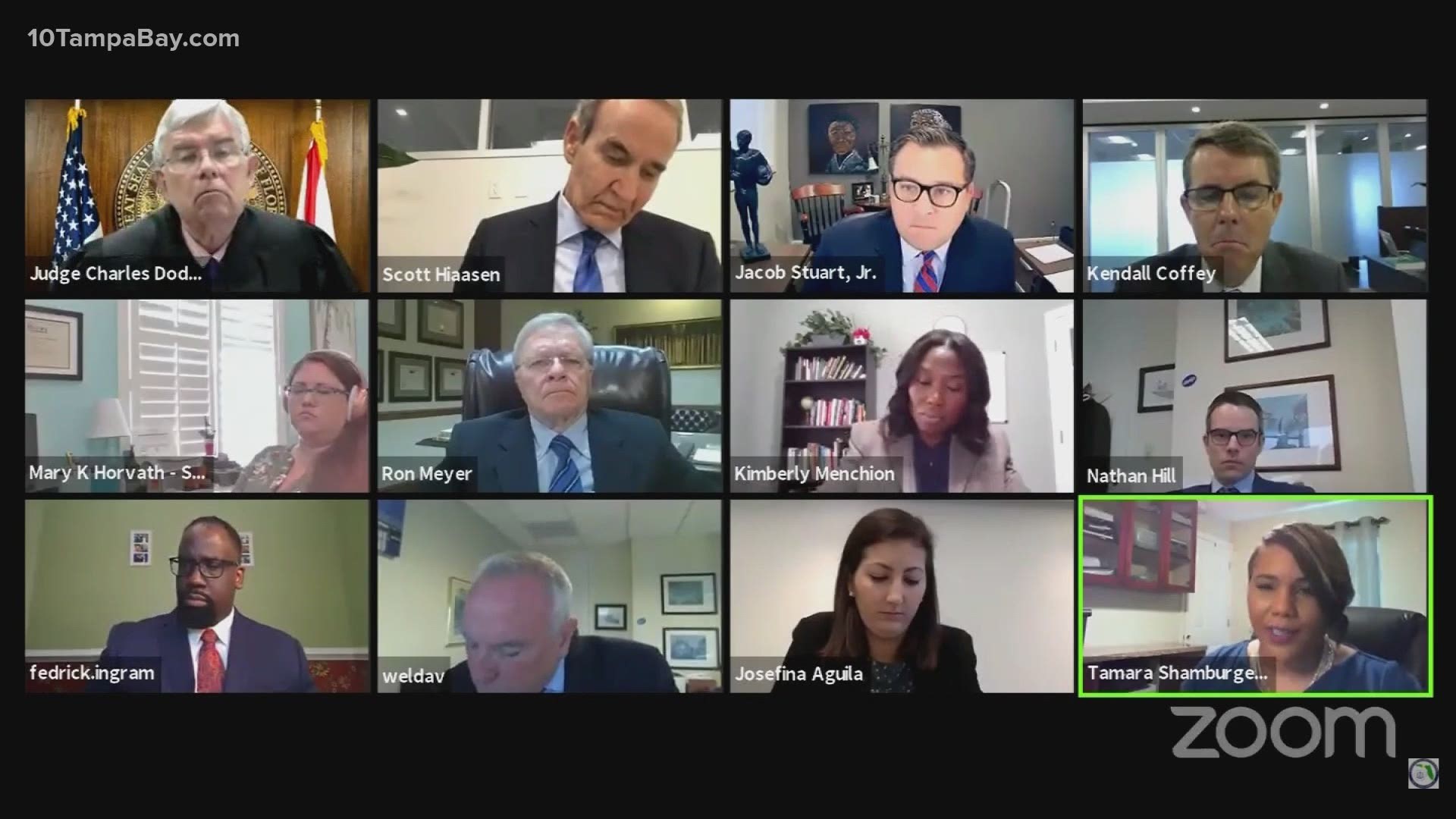 LEON COUNTY, Fla. — The state's largest teachers union is getting its day in court, and the first witness it called was a Hillsborough County school board member.

Attorneys with the FEA are arguing the executive order violates the Florida Constitution because they say it does not promote a "safe" and "secure" school system. They say the state is "putting arbitrary and capricious demands" on districts.

After a month of legal back-and-forth including a change of venue and an attempt by the defense to get the case dismissed, testimony began Wednesday morning with the teachers union calling on its first witness, Tamara Shamburger, a Hillsborough County school board member who has been vocal about delaying the reopening of physical schools.

The FEA attorneys asked Shamburger to detail the advice she was given by medical experts at that August 6th special meeting where the Hillsborough school board voted to start school in an online format for the first four weeks.

"We did convene a special called board meeting to meet with the seven medical experts solely to get their opinion on our reopening plan and the safety of opening our school buildings," Shamburger said to a virtual court being held via Zoom because of the coronavirus pandemic.

Shamburger then explained how the state rejected their amended plan on August 7, ultimately forcing the district to open its doors by Aug. 31 despite mediation efforts by the Hillsborough Superintendent.

Last week, Superintendent Addison Davis announced the district was at risk of losing more than $200 million if it didn't open schools by the end of the month.

Shamburger addressed the court saying, "I was elected to represent this community. I know this community very well. I’ve lived in this community my entire life and to have Tallahassee really strangle my authority and my rights as an elected board member was extremely concerning."

Shamburger testified, "I asked all seven experts, should our school building be reopened was my exact question. Dr. Holt refused to answer."

At the special board meeting on August 6, Dr. Douglas Holt, the director of the Hillsborough Department of Health said, "I represent the health department here. I’m providing technical assistance and advice. I do not have a position," when asked if he would recommend opening schools.

A spokesperson with the Hillsborough Department of Health sent 10 Tampa Bay this statement:

After Shamburger, a high school teacher from the Orlando area took the stand Wednesday morning to answer questions about his concerns regarding returning to the classroom including poor ventilation, limited protective equipment, and putting his 81-year-old mother-in-law, who lives with his family, at risk.

On July 6, Gov. Ron DeSantis and the Florida Department of Education issued an emergency order to require schools across the state to reopen brick and mortar buildings for students, teachers and staff at the start of the new school year in August.

According to the FEA, the purpose of the lawsuit is to allow districts to make the best decisions for their schools, students, employees and community.

An e-mail from the union said, "We do not believe the commissioner of education has the legal right to compel districts to open physical campuses without regard to the health and wellbeing of the students and staff in the district. The suit seeks to invalidate his emergency order."

FEA lawsuit hearing HAPPENING NOW: After mediation Tuesday was unsuccessful, the 2nd Judicial Circuit of Florida will consider the FEA's motion for a temporary injunction against the Department of Education's emergency order to reopen schools today and tomorrow in an expedited hearing. 10tampabay.com