Some of the test results date back to April. 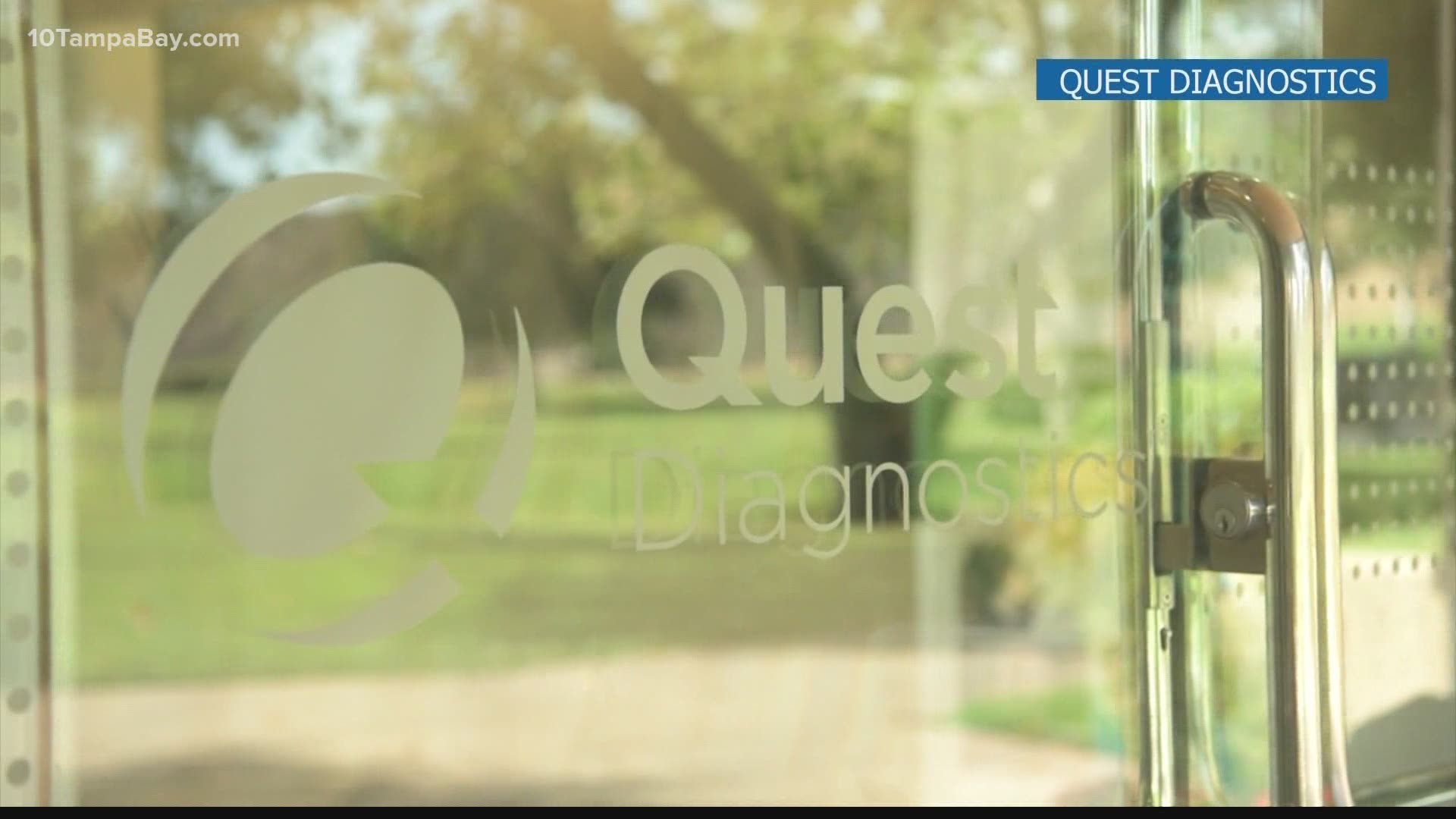 In a press release, state officials say Quest failed to report nearly 75,000 results, some of which date back to April. Leaders say the backlog of results were added to Tuesday's coronavirus report.

“It’s the most egregious dump we’ve had,” DeSantis said Tuesday.

Quest told the state everyone who had tested positive were notified of their results. According to the state, this "unacceptable dump of test results is a data issue and does not impact the health of individuals or the spread of COVID-19 in Florida."

Quest Diagnostics is a nationwide lab that provides testing at private sites and also does limited testing through the state of Florida.

“The law requires all COVID-19 results to be reported to DOH in a timely manner," DeSantis said. "To drop this much unusable and stale data is irresponsible. I believe that Quest has abdicated their ability to perform a testing function in Florida that the people can be confident in. As such I am directing all executive agencies to sever their COVID-19 testing relationships with Quest effective immediately.”

On Monday, the governor's office was told the nearly 75,000 tests would be entered into the health department's COVID-19 tracking system. Most of the data is more than two weeks old, with some results as old as nearly five months.

The state said the results would be added in the interest of transparency.

The health department says that without the backlog of Quest results, Tuesday's report for new COVID-19 cases for Aug. 31 is 3,773 cases with a positivity rate of 5.9 percent.

With Quest's data included, there are 7,643 new cases with a 6.8 percent positivity rate.

“It sends a message about being sloppy and patient quality that feeds concerns of transparency and trust people have in the system,” said Dr. Jay Wolfson with the University of South Florida.

"Quest Diagnostics takes seriously our responsibility to report laboratory data to public health authorities in a timely manner to aid pandemic response. Due to a technical issue, our reporting of a subset of public health COVID-19 test data to the Florida Department of Health was delayed. This subset involves nearly 75,000 of the approximately 1.4 million COVID-19 tests we had performed and reported to the state.

We apologize for this matter and regret the challenge it poses for public health authorities in Florida. The issue has since been resolved.  Importantly, the issue did not affect or delay reporting of test results to providers and patients.

Quest Diagnostics has provided more COVID-19 testing on behalf of the citizens of Florida than any other laboratory and we believe we are well positioned to continue to effectively aid patient care and public health response for the state. We remain open to working with the state Department of Health to provide testing that meets the needs required for patient care and public health response."

Wolfson said this shows the state of Florida is not messing around when it comes to testing backlogs. But, with Quest Diagnostics delivering 1.4 million results to the state, more than any other lab, there is a big void to fill.

"It means in the short term the state has to find a way to fill the gap," he said. "The state is trying to improve waiting times. It's a wake-up call for everybody."

There are more than 100 labs the state of Florida uses to process COVID-19 test results. One is Laboratory Corporations of America, which has turned in nearly 915,000 tests. Another is AdventHealth, which has opened several testing sites around Tampa Bay.

This isn't the first time there has been a reported issue with a testing lab in the state. Back in May, AdventHealth reported it would be cutting ties with a third party lab after the lab failed to get the tests back to the hospital group in a timely manner. That delay impacted 33,000 coronavirus tests statewide.

Other states have also had problems with Quest Diagnostics. The Montana Department of Health confirmed it had cut ties with the lab in late July.

Nationwide, last month the FDA warned a widely used coronavirus test could lead to false results for patients. Thermo Fisher's TaqPath genetic test had issues relating to laboratory equipment and software used to run the test, which could lead to inaccuracies, regulators said.