The state has reported 2,300,786 people in Florida have tested positive for coronavirus since the pandemic began. 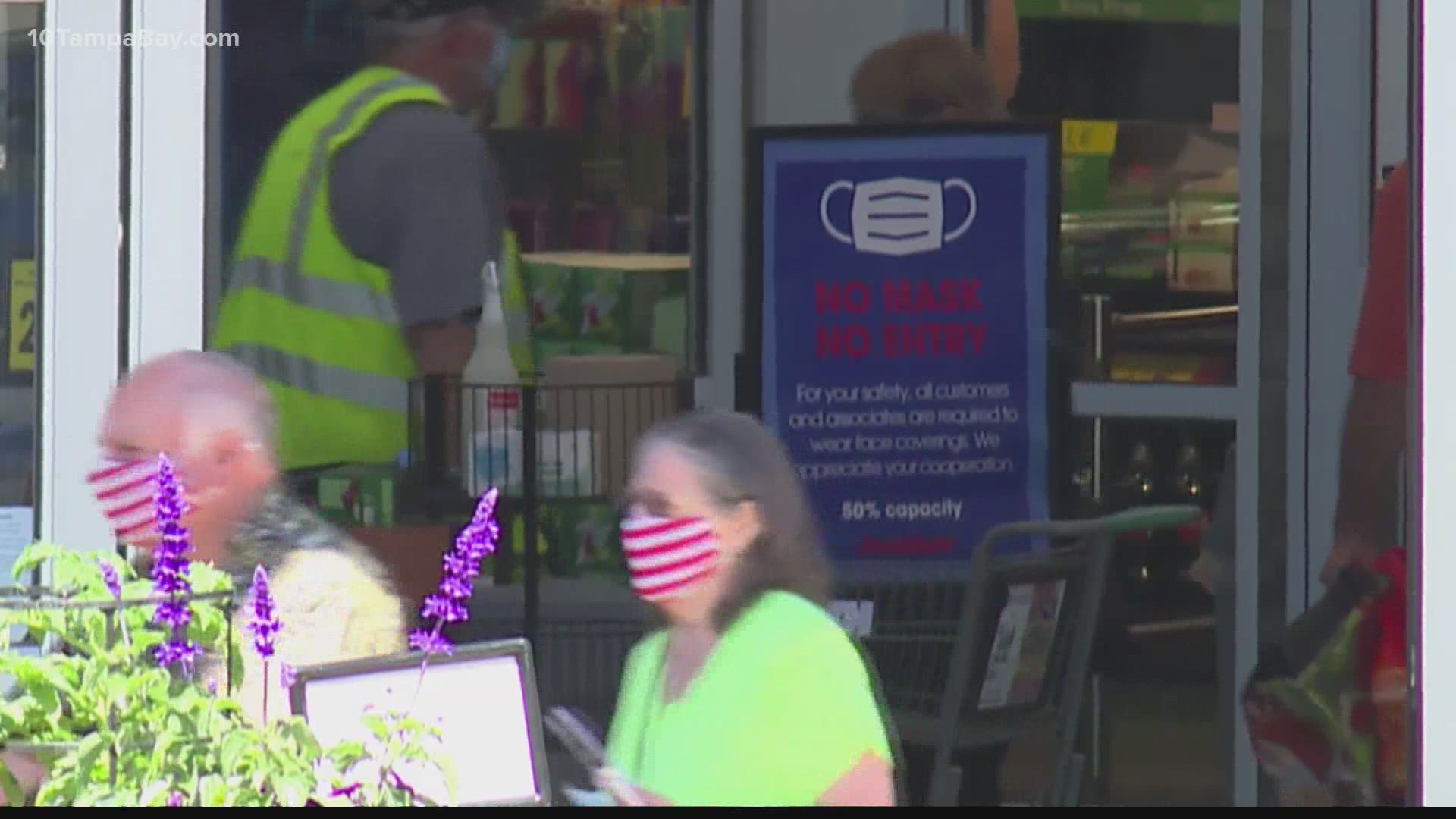 ST. PETERSBURG, Fla. — Florida reached a grim milestone in December 2020, becoming the third state in the United States to reach more than 1 million reported cases of coronavirus since the pandemic began. Then, on March 20, 2021, the state reported more than 2 million cases.

On Friday, the state released its first weekly coronavirus report, after state officials decided to halt daily reports on Jun. 4. Florida reported 12,157 new COVID-19 cases between Jun. 4 and 10. This pushes the state's overall total to 2,300,786 cases since March 2020.

The reason why the state's total number of coronavirus cases dropped in the last week is that the new weekly report does not contain information on non-resident cases or deaths.

On Dec. 14, hospitals across the United States received the first shipments of Pfizer's COVID-19 vaccine. Tampa General was one of five hospitals in Florida to get the shots.

As of June 11, more than 372 million doses of COVID-19 vaccine have been given throughout the U.S., according to the CDC.

According to Johns Hopkins University of Medicine, the United States has more than 33.4 million coronavirus cases, the highest recorded number in the world.

The highest single-day case number Florida has reported so far is 19,816 for Jan. 6. The report released on Jan. 2 of 31,518 newly-reported cases is higher, but that reported combined updates for Dec. 31 and Jan. 1

Florida has been in "Phase 3" of reopening since Sept. 25, when Gov. Ron DeSantis signed an order guaranteeing restaurants the right to operate and lifting state-level capacity restrictions on them.

Still, many cities and counties in the state have continued mask mandates in an effort to curb the spread of coronavirus. Here's a breakdown of where you're supposed to wear one around Tampa Bay.

However, on May 3, Gov. DeSantis announced he would suspend all local pandemic emergency orders. A new law and executive order are expected to take effect July 1.

Florida is testing more people now than when the pandemic began. Some days, like weekend days, however, have seen drops in the number of people being tested.

Friday's report showed that of the tests that were returned from labs between June 4 and 10, 3.4 percent tested positive for coronavirus.

It's important to note that the percent positivity rate doesn't tell the whole story. It's just one metric. Here's Dr. Jill Roberts with the USF College of Public Health explaining how to process that data.

Still, it's one data point that can help us understand the bigger picture.

If you consider our 14-day moving average, as pictured in the chart below, the percentage of people testing positive has been steadily declining in 2021 and going back down after a slight increase.

RELATED: Florida coronavirus: How to search for COVID-19 cases by county and zip code

The World Health Organization has recommended a state consistently test at a positive rate of 5 percent or lower for a 14-day span to continue reopening.

We should note that if you look at the state's dashboard for new coronavirus cases, some of the numbers look different than ours – at least for daily new cases. That's because the state is only tracking Florida residents, not total cases in Florida, on its dashboard. It only tracks the latter within its daily report. And, the chart on the state's website is regularly being revised to say a case happened on one day instead of another.

For consistency, we've decided to track the total cases reported each day. Those totals don't change, so it's our most consistent way of measuring trends, even if the state moves data around on its dashboard. For transparency's sake, here's a direct link to the state's data if you'd like to examine Florida's numbers for yourself.

Overall in Florida, 37,265 people have died after being infected with the coronavirus.

The state lists deaths on its dashboard by the date of death, not the day it’s reported, so the dashboard is constantly in flux.

Data compiled based on state information and The COVID Tracking Project suggest our daily deaths had remained relatively consistent – from a trend standpoint – until about early July, at which time we began to see a noticeable climb in newly-reported deaths.

Florida on Aug. 11 again broke its own record for new deaths in a single day's report. Counting Floridians and non-residents, 277 is the highest number of new deaths reported by the state in a day.

Back in August, Florida confirmed its youngest COVID-19-related death since the pandemic began – a 6-year-old from Hillsborough County.

In December, the U.S. green-lighted two coronavirus vaccines with emergency use authorizations. Shipments for Pfizer and Moderna's shots have already made their rounds across the state.

In late February, J&J received its emergency use authorization, making it the first single-dose vaccine to be given out in the U.S.

So, where does the state stand on vaccinations?

According to the Florida Department of Health's latest report, 1,801,720 people across the state's 67 counties have been given the first dose of the COVID-19 vaccine.

Another 8,659,077 people have received the second dose or have gotten the J&J single-dose shot, meaning they are considered fully immunized.

As of Friday's report, 2,346,010 of the state's vaccinations took place in the greater Tampa Bay area. More rural areas are seeing fewer vaccines due to the "ultra-cold" storing requirements the Pfizer vaccine requires. However, that could change due to the rollout of the Johnson & Johnson vaccine, which only requires refrigeration temperatures for storage.

One of the most common questions we get asked is: How many people have recovered from COVID-19 in Florida?

The truth is, it's hard to say.

Two of our reporters, Angelina Salcedo and Josh Sidorowicz, have tried to get answers for you. But, they've run into challenges.

First, there's no clear definition of what constitutes recovery, which makes it hard to track.

"It can be that they're symptom-free, but they may still be shedding virus and so they still need to be isolated. There are people who we don't know what the recovery period is, so recovery can mean many things. It's not defined clearly," said Dr. Janice Zgibor with the University of South Florida Public Health.

While some states report recoveries, Florida does not.

"I think it's difficult to record who is recovered because of all of the definitions of recovered. Also, logistically, you would have to follow every positive case to determine when they've met either the time criteria or the symptom criteria," Zgibor said.

You may have seen recovery numbers from Johns Hopkins University, but those are actually just estimates. The U.S. doesn't have a uniform way of reporting recoveries. That's partly because resources need to stay focused on contact tracing and testing.

Even Johns Hopkins says its numbers shouldn't be taken at face value.

“Recovered cases outside China are estimates based on local media reports," Douglas Donovan, a spokesman at John Hopkins, told 10 Tampa Bay in April. "And may be substantially lower than the true number.”

The state-by-state patchwork of reporting recoveries -- with some doing so and some not -- makes it even harder for Johns Hopkins to estimate the numbers.

10 Tampa Bay has repeatedly reached out to the Florida Department of Health since the outbreak started to try and get recovery numbers.

We've received a similar response each time. The health department says they're working on a way to get that data.

Many of you ask us to not just report the NEW #coronavirus cases @HealthyFla reports each day, but the RECOVERIES as well. Here's why that's hard ⬇️ We have asked the State for months - This is the word for word response we get each time. We're still pushing for more @10TampaBay pic.twitter.com/5yiQK1Fcwk

RELATED: As millions are tested, some are finding it difficult to get a COVID test done