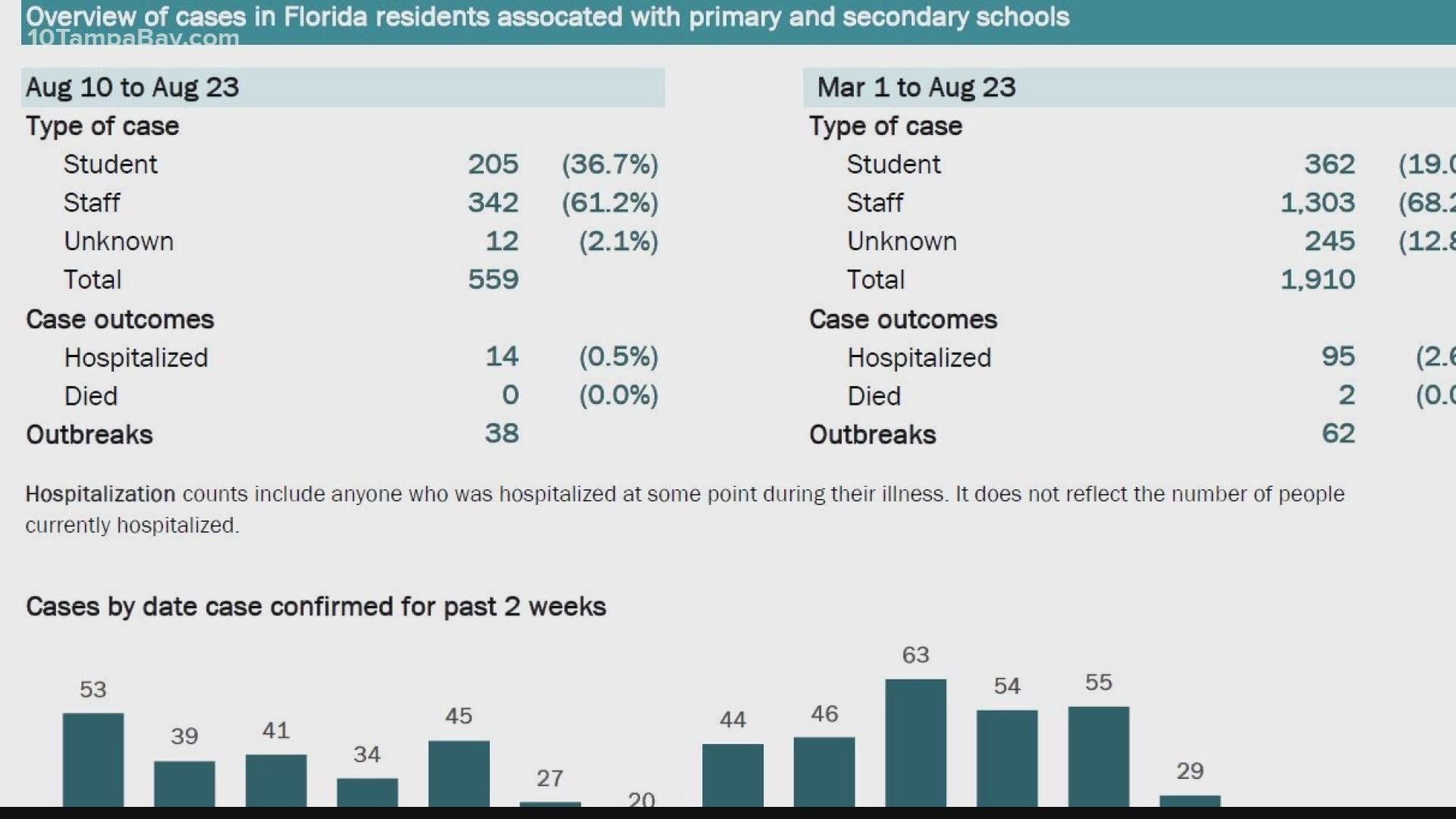 ST. PETERSBURG, Fla — New data released by the Florida Department of Health is letting us know exactly how many cases of coronavirus are in our local public schools.

But the state isn't the only one tracking it.

Rebekah Jones, the data scientist behind the creation of the state's COVID-19 dashboard, is also publishing the numbers -- and it’s not just regarding schools in this state.

You may recognize her name. She says she was removed from her position with the Department of Health after questioning why certain data was not being used in the state report  The state said she was asked to resign due to insubordination.

10 Investigates' Jennifer Titus spoke to Jones about this new dashboard. She told Titus, "There really needs to be a national database for schools that does this kind of thing. And there wasn't and I saw that as there's information gap here.

The idea came from a someone currently working as a teacher.

"The idea for this project actually came from a Florida teacher who messaged me on twitter at the end of July saying that she taught during the summer school session and knew of teachers and students who were positive but she didn't see anything in local news about it and she thought somebody should know," Jones said.

Jones is working with a national non-profit on this new dashboard. Together they are doing their best to track coronavirus cases school by school in every single state.

Jones said, "First, what I did was I checked and made sure that nobody was doing this on a federal level. And I started looking at individual states and how they were doing it which is evolving very quickly. Just this past weekend, DOH said they're going to start releasing, you know, by county, students and staff that are public."

The Florida Department of Health did just that, releasing data for not just elementary middle and high schools but also childcare centers and colleges.

While this adds transparency to the state's data, Jones found it’s not the same across the board when it comes to state by state comparisons.

She said, "and the way that they collect it is different from the way they report it. Mississippi actually has one of the most robust reporting methods internally for case data every single Friday, every single school reports on how many positive cases they've had, or people are quarantined. They don't release that granular data yet."

Jones hopes the more pressure put on school districts, state and federal leaders will lead to a universal tracking system for COVID-19 cases and schools. Not just on the state level, but a national database. Currently, there isn't.

But until then you can find her dashboard by clicking here.