The governor says if the people of Manatee County don't like the site the state would be happy to allocate the doses elsewhere. 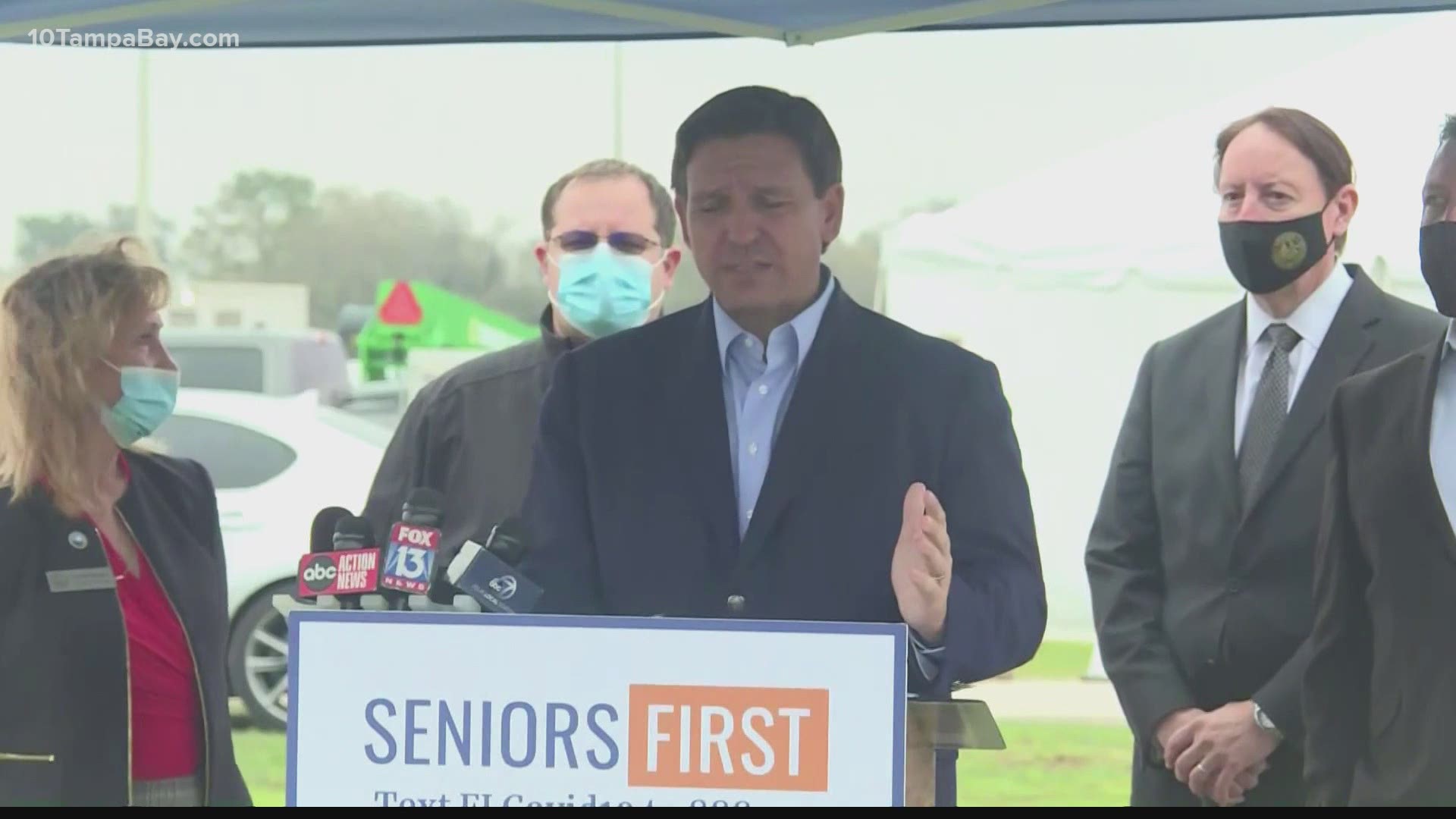 LAKEWOOD RANCH, Fla. — The selection of Lakewood Ranch as one of the state's new pop-up COVID-19 vaccine sites has all eyes on the governor.

It all started when Commissioner Vanessa Baugh told commissioners she chose to give the 3,000 appointments to those who live in Lakewood Ranch's neighboring two zip codes 34202 and 34211 during their Tuesday night meeting. This choice varies from the way the county randomizes vaccine allocation through a lottery system.

"It has nothing to do with Manatee County Commission. This was strictly by Mr. Jensen, the governor with my help," Baugh said.

The distribution decision is one that raised red flags for other commissioners who expressed their gratitude for the additional supply, but wanted a more equal distribution.

"It does compromise our system. It does pit people against each other. We ask you know why we think there's a racism problem perceived in Manatee County this adds to that argument because you're taking the whitest demographic, the richest demographic in Manatee County, and putting them ahead of everyone else," said Commissioner Misty Servia, who represents District 4.

With questions circulating on the topic, Gov. DeSantis was met with scrutiny during a press conference Wednesday at the Lakewood Ranch pop-up site.

His response to there being concerns over vaccine distribution: “Would they rather us send it to other counties?"

The governor also added that the doses distributed at the state-run pod sites aren't "earmarked" for Manatee County. They're actually separate supplemental doses to the 6,000 the county sees weekly.

“It wasn’t a choice about zip codes. It was a choice about where’s a high concentration of seniors, where you could have communities provide the ability for them to go on. It wasn’t choosing one zip code or another," DeSantis said before listing locations other pod sites have popped up.

The governor doubled down several times on there was no preference given to the wealthy and predominantly white community when the location was selected.

“Look, I mean if Manatee County doesn’t like us doing this then we are totally fine with putting this in counties that want it. And we’re totally happy to do that," DeSantis said.

"So, anyone that’s saying that, let us know if you want us to send to Sarasota next time, or Charlotte, or Pasco, or wherever, let us know. We’re happy to do it but I think most people, if we have an opportunity to bring vaccines and do it efficiently that they’re going to want it.”

DeSantis told those in Manatee County that he would not be complaining but would rather be thankful for what the state is doing to help because "[they] didn't need to do this at all" but saw a need in the area and wanted to get the vaccine numbers up for seniors.

According to the latest report on the Department of Health's website, more than 1.5 million white people in Florida have been vaccinated. That compares to just more than 850,000 people that make up several demographic backgrounds.

"In regards to the press conference about the vaccines that were given to Manatee County and limited to a predominantly white, and wealthy neighborhoods in Lakewood Ranch; the situation is disheartening," Robert 'Coach' Powell, president of the Manatee County Branch of the NAACP, wrote in a statement.

"Although I am happy with Manatee County receiving 3000 doses I am not happy with it going specifically to an area with just under 3000 COVID cases and the area that has over 8000 cases, which are predominantly black and brown, and are disproportionately affected by this disease, received none. I feel this was truly politically motivated. I feel that an entire demographic of people were totally disregarded and I truly have an issue with that!"