ABSENT: Students vanished during the pandemic 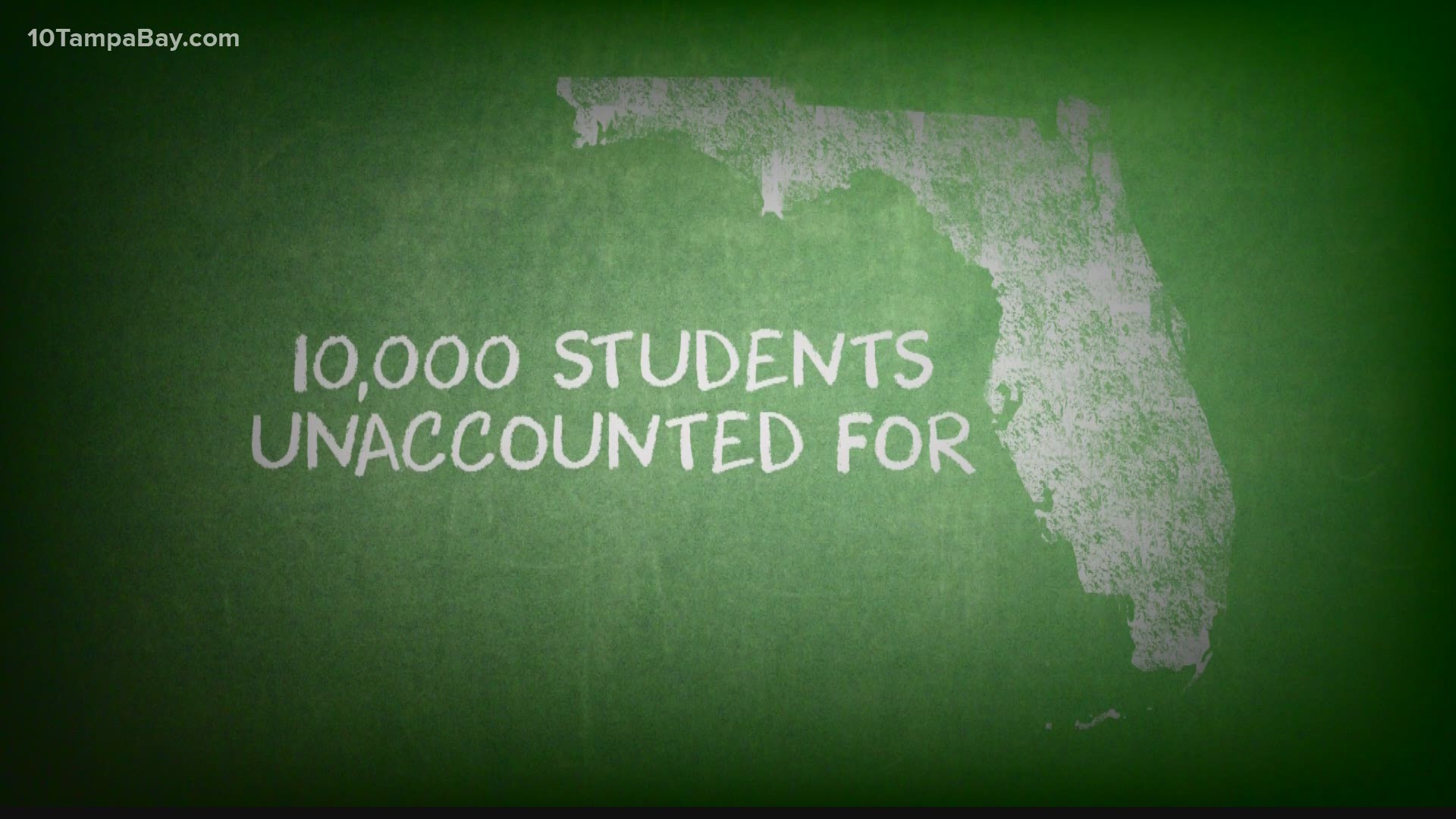 Many issues have come out of this "new normal" of school, but one of the biggest issues is tracking these children and the impact these virtual classrooms are having on children.

On a Tuesday morning, 10 Investigates was allowed to get a glimpse into the world of three district employees in Hernando County.

Their job...searching for a 5th grader who has been missing from class.

They hop into their car and drive to the only address they have on file.

No one is home.

10 Investigates' Jennifer Titus sat down with one of those employees, Jill Kolosa, the director of student services for Hernando County Schools.

Jennifer Titus: "Would you say your role has changed since this pandemic began and we started seeing kids either in person or virtual?"

Jill: "I would say the focus has changed significantly."

10 Investigates listened in as school employees called dozens of phone numbers, trying to track down the whereabouts of missing students.

These conversations are happening daily.

Jennifer: "How many unaccounted for students has Hernando county had?"

Jenn: "Have you guys ever seen that number before those 2,000 unaccounted for students?"

Since then, the number has dropped to 117. But, that is just in Hernando County.

There are 10 districts that make up the Tampa Bay area.

One of those districts told us it wasn't tracking the numbers, but the rest were.

Those numbers show there were nearly 10,000 students unaccounted for at the beginning of the school year.

"There are assistant principals going to homes, counselors, social workers. We have two attendance assistance, that's all they do is they have referrals, and they go to the homes and they're doing 100 to 200 visits a month," Jill explained.

A report from October obtained by 10 Investigates shows full-time student membership has decreased by more than 87,000 students statewide.

Kiara Bogle is a Hillsborough County senior. For months, Kiara was one of those thousands of unaccounted-for students.

"It's kind of hard," explained Kiara.

Kiara says her family was impacted by the pandemic. When schools went virtual, she moved in with her grandmother.

"Without a laptop, I didn't have one at the time. So, I had to do my school work on my phone. So, it was kind of difficult to really get on and do all of that at the same time with everything," Kiara told Jennifer Titus.

Vincent Lisbon is the executive director of Bethel Community Foundation, the only truancy center in Pinellas County.

"So, if a kid is truant and police pick them up, you know, hanging out at the mall or wherever, we're the drop-off site, the police will bring them to us," Vincent explained.

Jennifer: "How many kids do you normally see coming into your center?"

Jennifer: "What are you guys seeing this year?"

Vincent: "We're seeing maybe one or two? I'd say for a month, maybe three? Maybe three a month?"

Vincent says the number of students who have vanished doesn't shock him. Instead, he says, the pandemic has made tracking these truant students almost impossible and that is why, he feels, the rooms at his center are sitting empty.

He says not being able to connect and offer their services for students who are struggling is frustrating.

"Normally, we're able to get involved. Bethel was able to get into the house, identify the barriers to truancy and why they're not going. And we have a pretty high success rate with getting kids back on track, going to school and, and graduating from truancy court. Ever since that's gone virtual. Both, you know, with online learning and truancy court being virtual, like you just said, it's been extremely difficult," said Vincent.

Jill, however, says the many efforts to locate those missing are working.

"It's just a matter of slowly chipping away and finding whose moved or whose maybe living with another family. Because the economic issues have impacted our families and they have moved in with other families or relatives," Jill explained.

But, she says finding them is only one part of the solution. Now, the focus is getting those students back into the classroom.

"We are are not really struggling with unaccounted-for students at this time. It's more the chronic students that are truant," explained Jill.

For Kiara, strangers reached out and gifted her a laptop; and she's now enrolled back into school.

"Knowing that people understood me, and they are part of me, and they knew that I could be reaching my potential. And that really gave me the motivation to do it. Because I feel like I don't want to let these people down that had faith in me and really saw what I can do. So, I feel like I owe it to them to really show them," said Kiara.

"I'm so excited. I get to wear my cap and gown soon. I'm really excited."

Jill says unfortunately she fears this will lead to a domino effect this fall.

Instead of a high number of missing or truant students, she believes there will be an extremely high retention rate.

State leaders have noticed the issues of "missing" students too. 10 Investigates spoke with Speaker of the Florida House, Chris Sprowls, who sent a letter to all school districts last week.

So, in addition to it being imperative that we get these children back in the classroom, we also are going to have to build our budget around the number of kids who are engaged in education."

Next month, another survey will be taking place statewide to find out how many students are still missing. That's important because in a couple of weeks the Legislature will begin preparing the budget and the amount of money districts get is based on how many students are enrolled in that district.