Rogue rebar, piles of pipes: South Tampa neighbor Turns to 10 before home gets fenced off

Tampa says it has to ease flooding at Dale Mabry and Henderson -- it's disruptive, but it's city right-of-way. Some neighbors question that. 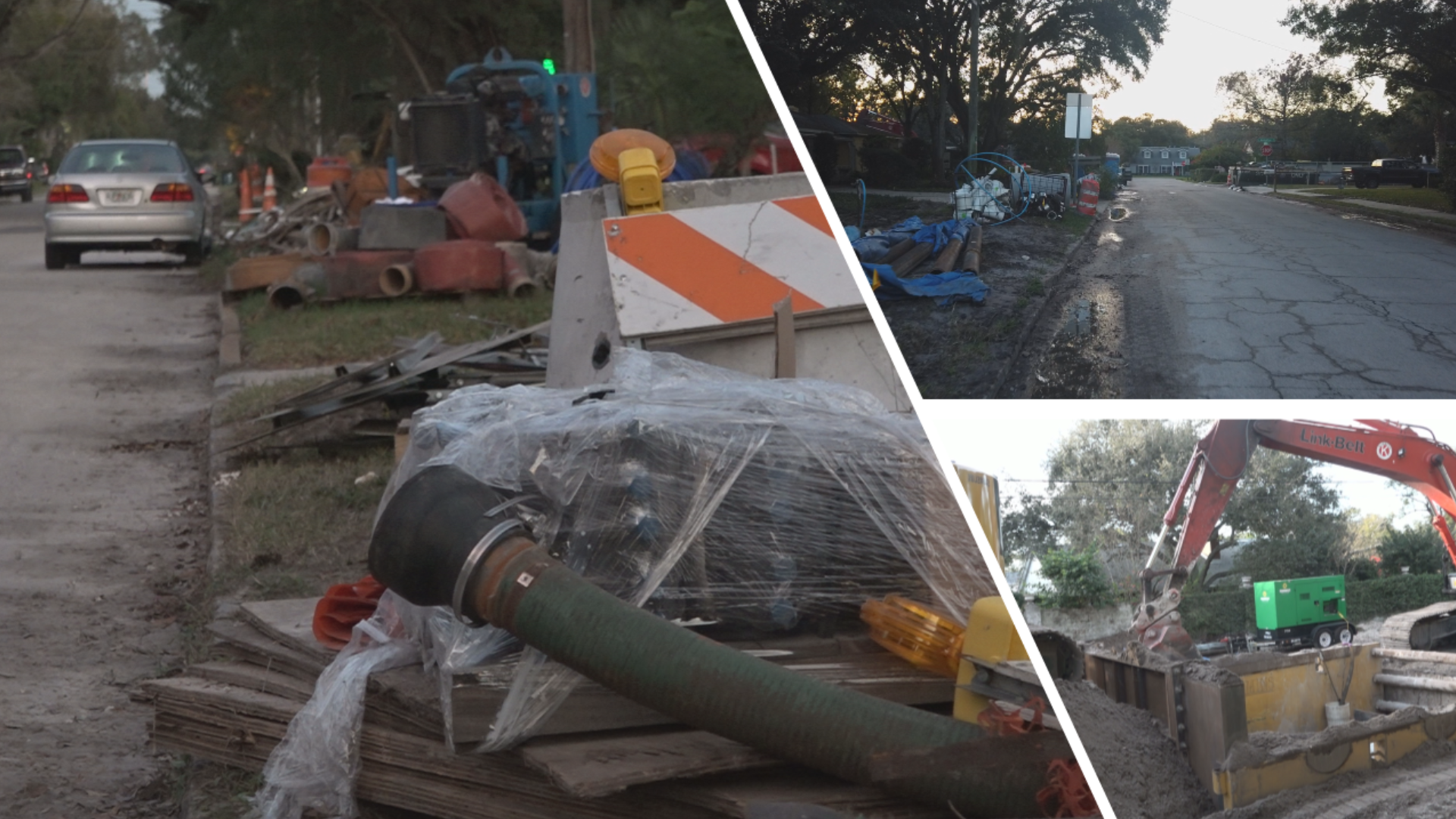 TAMPA, Fla. — Rusty pipes, tubing, piles of construction material, concrete storm drainage material -- throw in some rebar sticking out, and you have a mess in South Tampa.

Neighbors say not only are their front yards being used as storage, but they’re also losing driving access to their homes.

It’s part of the City of Tampa’s Upper Peninsula Watershed Drainage Project, also known as the Dale Mabry/Henderson Trunkline, to ease flooding at the intersection of Dale Mabry Highway and Henderson Boulevard. The $36 million design-build project is being executed by Kimmins Contracting Corp.

Powers Dorsett is one of the neighbors on W. Watrous Avenue who has had enough. He turned to 10, hoping 10Investigates could tell the story and help find a resolution for neighbors living through months of construction.

“How would the contractor or the city council like it having this in front of their house for months on end? They’re basically using our neighborhood as a storage area, which is hazardous and it’s just a total mess!” Dorsett said.

He walked 10Investigates’ Courtney Robinson down his street and pointed out the material being stored in what the city calls the right-of-way. That area is from the power pole or water meter boxes to the curb. In some cases, it’s 6-to-8 feet of front yards.

City council approved the project in late 2016 and awarded it to Kimmins in 2017.

Some neighbors, like Dorsett, say they didn’t know it would mean losing driving access to their homes for 3-4 weeks and that their yards would be used to store construction material.

Credit: Courtney Robinson, 10Investigates
S. Manhattan Avenue in South Tampa, Florida, is seen closed off for construction. Homeowners could not access their driveways during that time. It since has reopened as the project is moving down W. Watrous Avenue and blocking off homes there.

“I have an almost 8-year-old child and it’s a total mess and it’s dangerous,” Dorsett said. "You know they’ve got rusty pipes, there are materials all over the place and we’re not talking for a few weeks, this is going on for months and months."

John Zemina is the Vice President of Kimmins Contracting Corp. They admit this is one of the biggest projects in recent history for the city but says it must be done.

They’re digging up roads, installing large culverts, pipes and other material and Zemina says work is being done to restore the area behind them. He says in most cases, yards will be improved or will at least be restored to original landscaping.

He also says neighbors along the project’s path will see an upgrade in utilities.

“Nobody wants this in their front yard we understand that. I wouldn’t want it in my front yard, but I will tell you it’s in the best interest of the residents and the city to get this project through, done as quickly as possible,” Zemina said.

Zemina explained they need the right-of-way to store construction material because South Tampa is tight with real estate. He says there are not vacant lots they can rent, and they need to have material nearby to get the project done quickly.

Zemina says some of the material 10Investigates’ cameras recorded at the beginning of November has been there because they slowed down the build before Christmas to restore the area behind them and not disrupt neighbors along Watrous Avenue during the holidays.

He also says that Kimmins has worked with those who point out issues to them. They capped off the rebar sticking out of concrete storm drainage material after learning that kids were climbing on it.

Credit: Courtney Robinson, 10Investigates
10Investigates recorded concrete storm drainage materials on W. Watrous Avenue with exposed rebar. Some neighbors made light of the situation by decorating the construction materials in their front yards. Kimmins Contracting Corp. since has capped all exposed rebar.

According to Zemina, neighbors knew this project was coming and everything was laid out during a public meeting.

“The problem is I can describe it as much as you like, but until you live it you don’t see it and unfortunately no matter what I say, when it’s in front of your house it’s big,” he said.

He says there is no avoiding closing the road and limiting residents from being able to drive to their homes. Kimmins has hired a guard to ferry people to their homes in a golf cart until the project is no longer in front of their houses.

Blake Gaylord is an eminent domain and property rights attorney with the Tampa law firm, Gaylord Merlin. He says they have heard from multiple residents questioning whether the city and Kimmins are violating their rights as property owners.

“The question is always whether private citizens should bear a burden of such a project that’s different than the public at large and so it’s not that they object to the project, it’s how the project is impacting their private property,” he said. “Is it reasonable to ask someone to be carted to their home for 3 or 4 weeks, multiple months?

"I can’t answer that question, but it does seem on its face to be unreasonable to ask people to do that.”

He says as the city starts to take on larger projects like this one, it’s important that you get involved from the beginning, work with the contractor and ask questions.

“South Tampa’s unique. There are tight spaces. The roads are usually narrow and there’s not a lot of room within the right-of-way to work. It seems like a reasonable question to ask, ‘Where is all this stuff going to go when all this work happens?’” Gaylord said.

Dorsett says he could understand if he couldn’t get a car to his house for a few days, but more than a month is unreasonable.

“It’s kind of a nightmare scenario to live through,” he said.

Zemina says they know it’s disruptive, but they will be done as fast as they can.

“The project benefits the overall city and the neighborhoods. It’s got to be done. Frankly with all of the upgrades to utilities they shouldn’t see a city crew out here for a long time digging up anything,” Zemina said.

10Investigates did point out green space next to the Cal Dickson Tennis Center on W. Watrous Avenue and asked why Kimmins was not using that to store materials rather than asking neighbors to bear the burden with the right-of-way.

Zemina says they have since reached out to the city parks department to see if they can use that space. He says it will help alleviate the need to use some right-of-way, but it won’t eliminate the need to close the road to drivers and homeowners.

There is a 24-hour hotline for neighbors impacted by the project. That number is 813-235-0364. You can learn more about the Dale Mabry/Henderson Trunkline here: www.tampastormwater.com

RELATED: Amazon shopper gets $1,295 refund after Turn To 10 gets involved