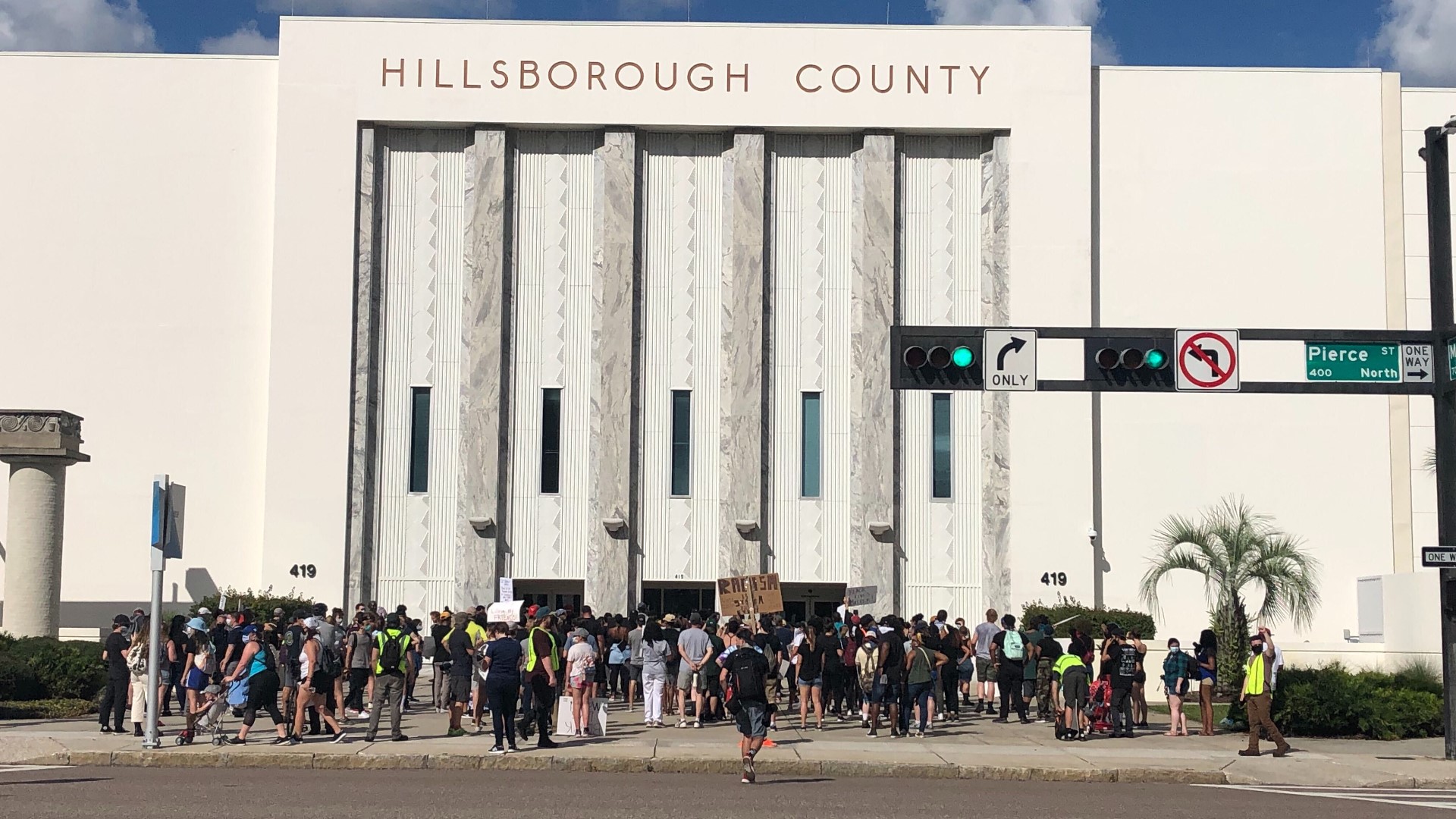 TAMPA, Fla. — Hillsborough State Attorney Andrew Warren's office said "there is no legal basis" to charge any of the five Tampa police officers involved in a deadly shooting on April 28, 2020.

Jonas Joseph, 26, was shot and killed that night following a traffic stop. Police said at the time that Joseph was driving a car that matched the description of the car involved in a shooting the week prior.

The shooting happened around 11:37 p.m. April 28 on North 34th and East Palifox streets in East Tampa. Officers said they attempted a traffic stop on a white Impala, which Joseph was driving.

At one point, police say Joseph hit a police cruiser and then a tree while trying to take off. Then, Joseph started shooting at officers, who in turn fired their guns and killed him, according to police.

After an investigation of shooting, the State Attorney's office on Thursday released more details and a statement. In determining not to charge any of the five officers involved in the shooting, the office said it "conducted an exhaustive review of all available evidence and applicable legal standards."

"After our thorough analysis, we have determined that the facts and evidence of this incident prove that the law enforcement officers justifiably believed they were in imminent fear for their lives and their fellow officers' lives," the statement reads.

Based on the evidence and interviews collected, the State Attorney's Office detailed a picture of what investigators believe happened. We have summarized their findings below.

Around 11:21 p.m. on April 28, officers spotted a Chevrolet Impala with the license plate number and description of a car reported in a drive-by shooting five days earlier. During the April 23 shooting, a person inside a house was shot but survived.

The Impala drove along E Palifox Street until it turned into a fenced backyard on N 35th Street. At this time, officers did a traffic stop, got out of their cruisers and approached the Impala.

The State Attorney's office said the cruisers were unmarked and the officers wore regular clothes, but each officer wore black vests marked with POLICE along with their police belts and badges.

The officers then asked for Joseph's license and registration and talked to him for about 15 minutes while he remained in the car. During the conversation, officers said Joseph appeared nervous while they asked him several times to keep his hands visible. Police said Joseph kept bringing his hands down to the seat and out of view.

Backup officers then arrived with four officers approaching the Impala while five other officers stayed back. According to police, as officers asked Joseph about his car and his whereabouts on April 23, "his response changed."

When officers told Joseph to step out of his car, police say he refused and abruptly rolled up the window of the Impala. One officer had pulled his cruiser behind the Impala to prevent it from moving, but police say Joseph put his car in reverse and attempted to back up, hitting the occupied police car that was about a foot behind it.

Then, one of the officers near the Impala used a retractable baton called an ASP to break the driver's window right before Joseph shifted the car into drive and sped forward across the backyard, according to police. Joseph reportedly then drove into a neighboring yard before hitting a tree head-on and stopped about 60 feet away.

The State Attorney's office said seven of the officers ran after the Impala while two other ran to their cruisers. Officers say they then pointed flashlights at the car to light it up and shouted commands at Joseph to put his hands up.

Police said the two closest officers saw Joseph shift his position from the driver's seat to the front passenger seat. The State Attorney's office said all seven officers who ran toward the Impala said they saw Joseph pointing a chrome or silver handgun at officers through the rear windshield.

And, police said those seven officers also heard the sound and/or saw the muzzle flash of one to three gunshots from inside the car, which shattered the rear windshield.

The State Attorney's office concluded that five officers opened fire at Joseph, who ducked down in the front seat of the car. After a pause, police said Joseph then began to climb out of the car through the driver's window with his gun still in his hand.

Officers then fired again and stopped when Joseph fell to the ground, the office said.

Officers approached and tried to render aid, but Joseph was already dead.

According to the State Attorney's office, the medical examiner determined one of the gunshots was instantly fatal, and Joseph was shot seven times.

The officers who fired their weapons fired 125 rounds.

Police said a silver handgun, a Taurus 9mm, was on the windowsill of the driver's door. The department later determined the gun was the one used in the April 23 shooting, and Joseph's thumbprint was found on the magazine of the gun, according to police.

A second gun was also found on Joseph's pocket, police said. Inside the car, officers found a duffle bag containing more than a quarter-pound of marijuana, more than 100 molly tablets, more than 50 Xanax bars, more than three grams of heroin, a gram of powdered cocaine and a gram of methamphetamine.

The Tampa Police Department presented its findings to the State Attorney's office on May 7. The office said it became aware that Joseph's family may have had additional evidence, so it worked with police and family representatives to make sure all relevant evidence was gathered.

On Thursday, Black Lives Matter Tampa held a news conference outside of Tampa Police headquarters to address the statement from the State Attorney's office. The group said the state "has changed their entire story" from the details first given back in April.

"This is official murder, they murdered Jonas Joseph," the group said. "They (the police) came up with a false story."

The group also criticized the police department's statement that no dashboard camera footage exists from the night of the shooting.

BLM Tampa said it is now calling on the FBI and other law enforcement agencies to investigate the shooting and Joseph's death. The group also said it is working with Joseph's family for further investigation and pursuing legal action.

In regards to questions from the public about dash cam and body cam video, the State Attorney's office said none of the officers at the scene was wearing a body camera. And, none of the responding cruisers was equipped with a dashboard camera.

The State Attorney's office said the identities of the nine officers directly involved that night are protected by Marsy's Law because "they are victims of an aggravated assault by Joseph."

The Tampa Police Department released the following statement after the State Attorney's office shared its findings:

After thorough review, the State Attorney found that the use of force in the officer involved shooting of Jonas Joseph was justified. On 04/28/20, officers spotted the vehicle used in a drive by shooting where an innocent woman was shot inside her home. During the traffic stop Joseph reversed the car, hit the officers vehicle, and attempted to flee. He pointed a gun towards officers forcing them to shoot. Two guns were recovered at the scene, including the one matching the ballistics of the gun used in the drive-by shooting.

"The last thing officers want to do is use deadly force. Regardless of the circumstances, we acknowledge the grief of the family and community. Since the shooting, our department has been fully cooperative with the independent investigation of the SAO. In this case, it is clear our officers were forced into responding to the threat of the imminent danger they faced." Chief Brian Dugan said.

Our department has always stood by transparency and adhering to the highest standards of policing. We understand the concerns of the community and will continue to take steps forward and serve our citizens as a progressive agency.

Black Lives Matter holds news conference at Tampa PD LIVE NOW: BLM Tampa, BLM Restoration Polk, and Sis, Se Puede are hosting a joint press conference with the family of Jonas Joseph outside Tampa PD. They are following up on the demand for dash cam video, an autopsy report and the release of the impounded car in his case. 10tampabay.com