What you need to know about Tampa's curfew order

The citywide curfew will apply to all people and businesses from 7:30 p.m. to 6 a.m. until further notice. 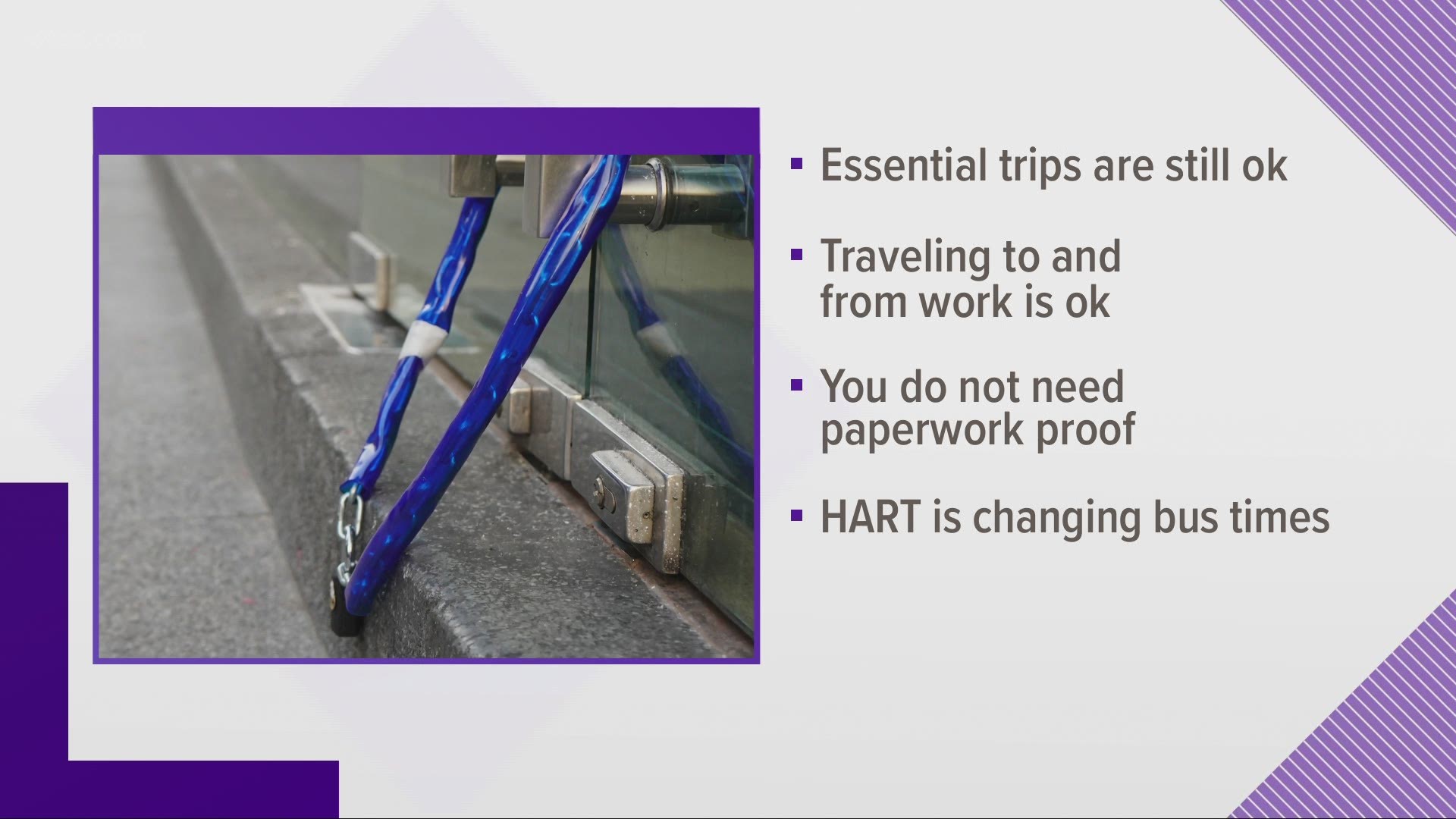 TAMPA, Fla. — Tampa city leaders Sunday will implement a curfew during the evening in an effort to keep people "safe and sound," Mayor Jane Castor said.

The citywide curfew will apply to all people and businesses from 7:30 p.m. to 6 a.m. until further notice. In a press conference Monday morning, Mayor Jane Castor confirmed the curfew would continue Monday evening.

This, after more than 20 people were arrested Sunday night following protests. Charges ranged from curfew violations to burglary and rioting.

Peaceful protesters are asked to go home as agitators, Castor said, are out and about causing damage -- and for everyone's safety, the fewer people on the streets, the better.

People making essential trips to the grocery store or pharmacy and those who work overnight hours still can be outside, the mayor said, likening the order to the safer at home order during the peak of the COVID-19 coronavirus pandemic.

"If you have to go somewhere, then you will be allowed to. However, we are asking everyone to stay home," Castor said. "So that is pretty simple, just stay home."

RELATED: More than 20 people arrested for burglary, rioting after Sunday protests in Tampa

UNREST IN TAMPA: Mayor Castor and Chief Dugan are speaking about protests that led to more than 20 arrests Sunday night. The mayor also says the city-wide curfew order will stay in place tonight. It begins at 7:30 p.m. and runs until 6:00 a.m. STORY: https://bit.ly/36RtXdJ

If a person is stopped by law enforcement, all that is needed is "a simple conversation" with the officer -- no paperwork necessary, Castor said.

But she added a majority of businesses "are going to be shut down" between the curfew hours.

Like overnight workers or those going to essential businesses, people who are going to and from Tampa International Airport also are not subject to the curfew.

"What I saw last night was not a call for voices to be heard, ideas to affect change, or ways to shine a light on inequality," Castor said in an earlier news release. "What I saw was shameful, what I saw was heartbreaking. And what I saw did not reflect our community and the values we share.

"We stand in solidarity with all of the peaceful protests happening in our city and around the country."

Hillsborough County Sheriff Chad Chronister emailed a survey to people who live in the county, asking if they thought a countywide curfew was necessary. Chronister later said such an order is not needed.

"In consultation with other county leaders, Hillsborough County has decided to not institute a curfew. I refuse to punish law-abiding citizens due to the lawless actions of a handful of criminals. Your Sheriff’s Office stands ready to deal with any threat."

Tampa's curfew comes after more than 40 people were arrested in the city Saturday night when protests turned violent.

Multiple businesses were looted along the Hillsborough, Busch and Fowler corridors. The Mobil gas station at N. 30th Street and E. Busch Boulevard was lit on fire, as well at the Champs Sports store located at N. 22nd Street and E. Fowler Avenue.

The evening scenes contrast with peaceful protests Saturday and Sunday afternoon in the Tampa Bay area following the death of George Floyd in Minneapolis police custody.

Posted by Tampa Police Department on Sunday, May 31, 2020