The body of 49-year-old Ernesto Caballeiro was discovered in a rural area in Pasco County, the sheriff's office says. Baby Andrew still is missing. 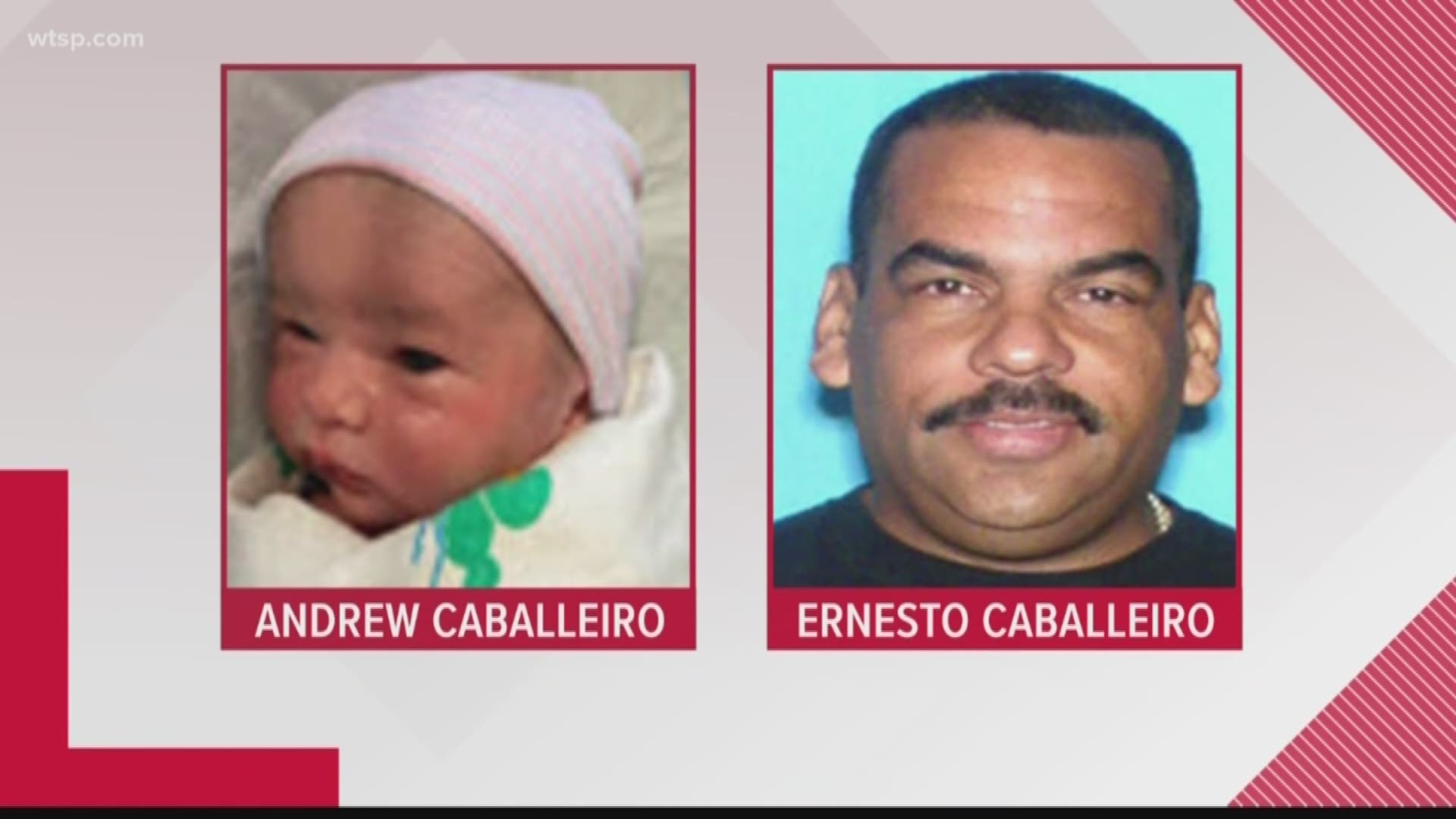 PASCO COUNTY, Fla. — After an exhaustive search of an area in Pasco County, Sheriff Chris Nocco said Thursday morning there has been no evidence discovered at the scene that confirms that newborn Andrew Caballeiro was with Ernesto Caballeiro in Pasco County.

An urgent search for a newborn baby is ongoing after his father, accused of abducting him, was found dead in Pasco County.

Deputies say a white Ford passenger van at the center of an Amber Alert was found after noon Wednesday in a rural area in Blanton, Florida, near Interstate 75, Pasco County Sheriff Chris Nocco said.

Following a search into the nearby woods with the help of a K-9 unit, the body of 49-year-old Ernesto Caballeiro was found with a single gunshot wound. Deputies continued searching the woods and nearby fields but at this time, one-week-old Andrew remains missing.

Bloodhounds even sniffed a pacifier found in the van and continued on their way to search, though still, Andrew remains missing.

"There was no indication that the child was in the area," Nocco said.

People who live in the area say they’re worried about the baby.

“I’m sad. I mean it’s cold out here too and him being so young,” Laura Dombroski said. She says this rural area is normally quiet.

But today, Dombroski came home to find her road filled with deputies, all of them searching for Andrew Caballeiro.

“There was just a lot of police presence. I didn’t know what was going on,” she told 10News.

There are two main tips Nocco said he hopes the public can assist authorities in their investigation: Someone told investigators they saw what appeared to be a blonde woman in the van.

"I sit here and pray to God that is true and that she has the baby," Nocco said. "... And if that woman is out there, please come forward. I promise you, all we care about is that little Andrew is OK.

"That's all we care about."

Nocco also said a pickaxe reportedly was left in the van, but that's nowhere to be found. His team, working with the FBI, Florida Department of Law Enforcement and the Miami-Dade Police Department, are trying to figure out where Caballeiro might have driven between Pasco County and South Florida.

Anyone who comes across the pickaxe, something else suspicious or has a tip is asked to call 911 right away.

"The baby may be anywhere in the state," Nocco said.

Miami-Dade police late Tuesday asked the public for help to find Caballeiro and the baby after three women were found shot to death inside a South Florida home.

According to local news stations WPLG and WSVN, investigators believe Caballeiro killed them.

A law enforcement source told the Miami Herald the women were related to Caballeiro, and they were the infant's mother, grandmother and great grandmother.

WFOR-TV reports Caballeiro has been arrested several times in the past, including on charges of grand theft, operating a chop shop and aggravated assault.