Deputy Michael Magli had been with the sheriff's office since 2013. He leaves behind a wife and two small children. 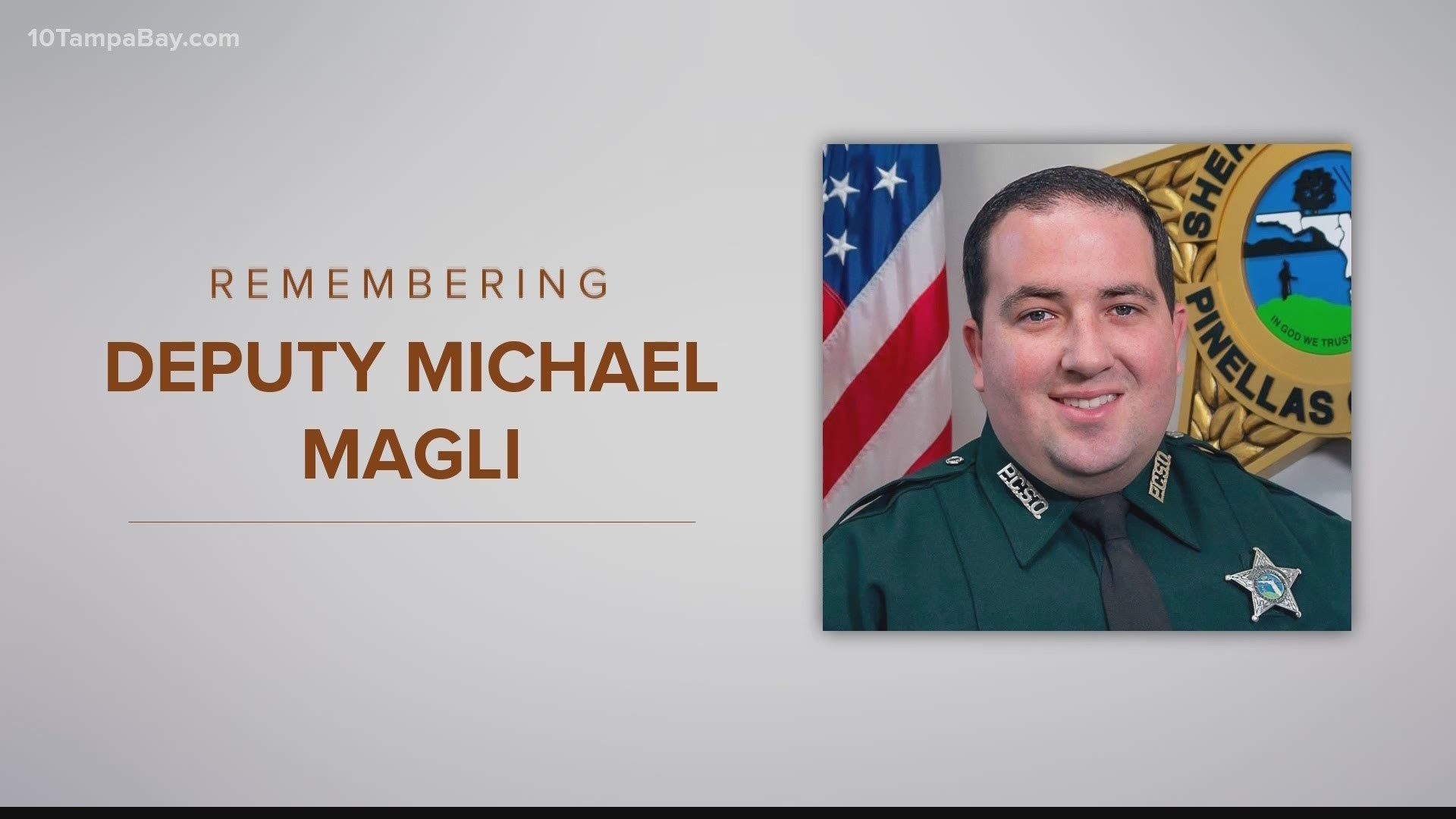 PINELLAS COUNTY, Fla. — The Pinellas County Sheriff's Office says one of its deputies was killed when a suspected drunk driver crashed into him Wednesday evening.

It happened at the intersection of East Lake Road and Forelock Road in Tarpon Springs.

During a news conference, Pinellas County Sheriff Bob Gualtieri said it all began when the Pinellas County Fire Department found Robert Allen Holzaepfel in his truck slumped over and unresponsive at a red light. Gualtieri says fire crews decided to break the truck's window to try to help him. When they broke the window, the sheriff said Holzaepfel took off and eventually led deputies on a chase.

"He was swerving all over the road, weaving, driving at a high rate of speed engaged in very, very dangerous and extremely reckless driving," Sheriff Gualtieri said.

"It was a situation where the person needed to be stopped, otherwise he was gonna hurt someone else," Gualtieri continued.

In an effort to stop Holzaepfel, Deputy Michael Magli parked his car in the median and took "stop sticks" from his SUV to place on the road. As he did so, Holzaepfel's truck "spun out, flipped over and very, very violently slammed into Deputy Magli and his cruiser," the sheriff said.

Magli was pinned under his SUV and died.

He is survived by his wife and two young children, his parents and other family members. Magli began working with the sheriff's office in 2013.

"Please keep [his family] in your thoughts and prayers during this tough time," Gualtieri said.

"Their life is forever changed, never be the same," the sheriff continued.
Over some drunk who's got 16 felony convictions and who's driving with a suspended license, who's fleeing from the cops, who's driving like a maniac. You know, I mean, that's what it's all about is some jerk who killed a deputy."

"[Magli] stepped up, like cops do, and tried to keep people from being hurt and he lost his life in the process," the sheriff said.

As of Thursday morning, Holzaepfel was facing multiple charges related to the crash, including first-degree murder. He also faces charges for DUI manslaughter and aggravated fleeing and eluding police officers.

In 2014, Holzaepfel was charged with driving under the influence, according to arrest records. The sheriff's office says Holzapfel's blood alcohol level registered as .230.

"I know this'll come as a shock, but [Holzaepfel]'s got 16 prior felony convictions, he's got a suspended driver's license, he's on probation until 2022," Gualtieri said. "He's drunk, and he's been arrested."

Florida Governor Ron DeSantis offered his condolences to Deputy Magli's family in a statement on Twitter, saying "Our heartfelt condolences go out to the family of Deputy Michael Magli, killed today in the line of duty. @FLCaseyDeSantis and I are keeping them in our thoughts and prayers, as well as the entire @SheriffPinellas family. His service and sacrifice will not be forgotten."

Our heartfelt condolences go out to the family of Deputy Michael Magli, killed today in the line of duty. @FLCaseyDeSantis and I are keeping them in our thoughts and prayers, as well as the entire @SheriffPinellas family. His service and sacrifice will not be forgotten. https://t.co/0n4AGaxaJy