Members of Temple Emanuel were joined Sunday evening by others in the community of all faiths to pray for peace and remember the 11 people killed in a Pittsburgh synagogue. 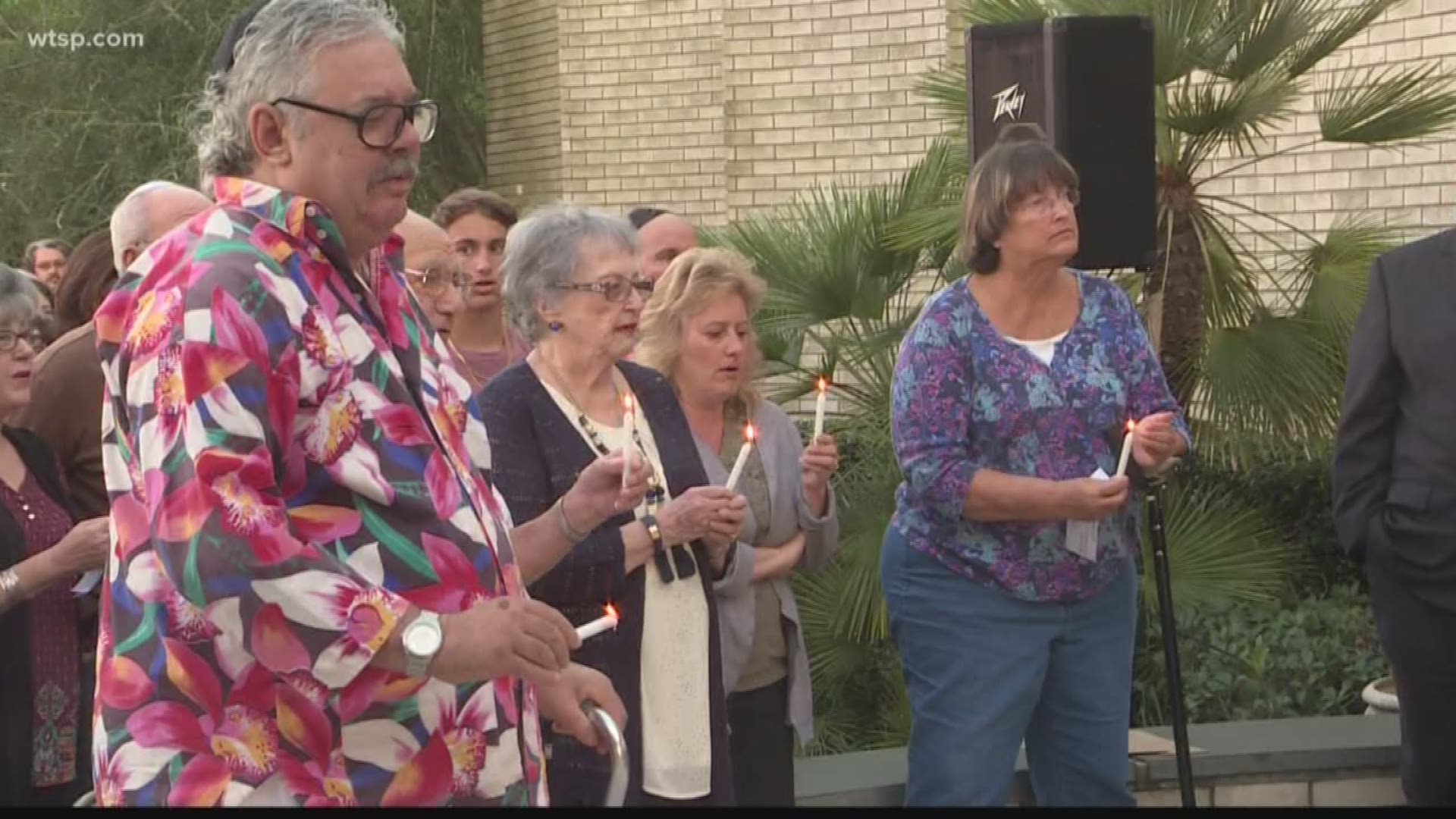 LAKELAND, Fla. — On the front lawn of Temple Emanuel, they lit candles and recited a prayer of peace.

More than 100 people gathered Sunday evening for a Service of Remembrance to honor the 11 members of the Tree of Life synagogue in Pittsburgh, Pa., who were killed Saturday morning when a gunman entered the building and started shooting.

“Our hearts break for the families of those murdered,” says rabbi at Temple Emanuel in Lakeland. “If it happened in Pittsburgh it could happen anywhere.”

“What affects one community effects another," said Rabbi David Goldstein, of Temple Emanuel. "The violence that occurred in Pittsburgh didn’t affect just Pittsburgh, it affected every community throughout this country and in many places around the world.”

According to police, Robert Bowers, 46, burst into the synagogue in the Squirrel Hill neighborhood of Pittsburgh yelling, "All Jews must die."

►MORE: Remembering the 11 victims of the Pittsburgh synagogue shooting

“There are all sorts of ridiculous myths out there about the Jewish people and it’s really easy to hate somebody and something you don’t know anything about," Goldstein said.

Bowers was wounded himself before he was taken into custody.

In addition to the 11 people killed, six others were injured, including four police officers.

Goldstein read aloud the name of each victim and then recited the 'Psalm of David,' in both Hebrew and English.

Goldstein and members of Temple Emanuel were joined by members of the community, including many of different faiths, along with Polk County Sheriff Grady Judd and U.S. Rep. Dennis Ross, R-Lakeland.

Judd said there had been no threats made against any of the synagogues in Polk County since the shooting on Saturday. But he reiterated that his office continues to work closely with all local places of worship and even offers an active shooter training program specifically for them.

“They encountered him [Bowers] coming out. We need to encounter him before he goes in.”

Elsewhere in the Bay area, stepped up security was visible on Sunday, including at the Congregation of B'Nai Isreal in St. Petersburg.

"I pray we don't need it in the long term," said Rabbi Philip Weintraub. "We spend an incredible amount of money every year on security and making sure this building is safe and I think about what we could be doing with that money—supporting the community in other ways."

We have family in Pittsburgh. It's a great, strong city. Our heart breaks for it & especially for the Jewish community. Also thinking of my friend @billpeduto today, confident his leadership will help his city through this. This nation really needs less hate & less guns ASAP.

Kriseman has family who lives just blocks away from the synagogue in Pittsburgh.

Governor Rick Scott on Saturday ordered Florida Highway Patrol to work with local police and sheriff's offices to increase patrols at religious institutions statewide. It's unclear how long that will last.

The shooting at Tree of Life , unfortunately, appears to follow a troubling trend when it comes to threats against people of the Jewish faith.

According to the Anti-Defamation League, the number of reported anti-Semitic incidents in the U.S. shot up by more than half—to nearly 2,000 reports—in 2017, which marks the largest increase in a single year since A.D.L. started keeping track in 1979.