Out of the group of people arrested, two men were found trying to meet with someone they thought were children online, the sheriff's office says. 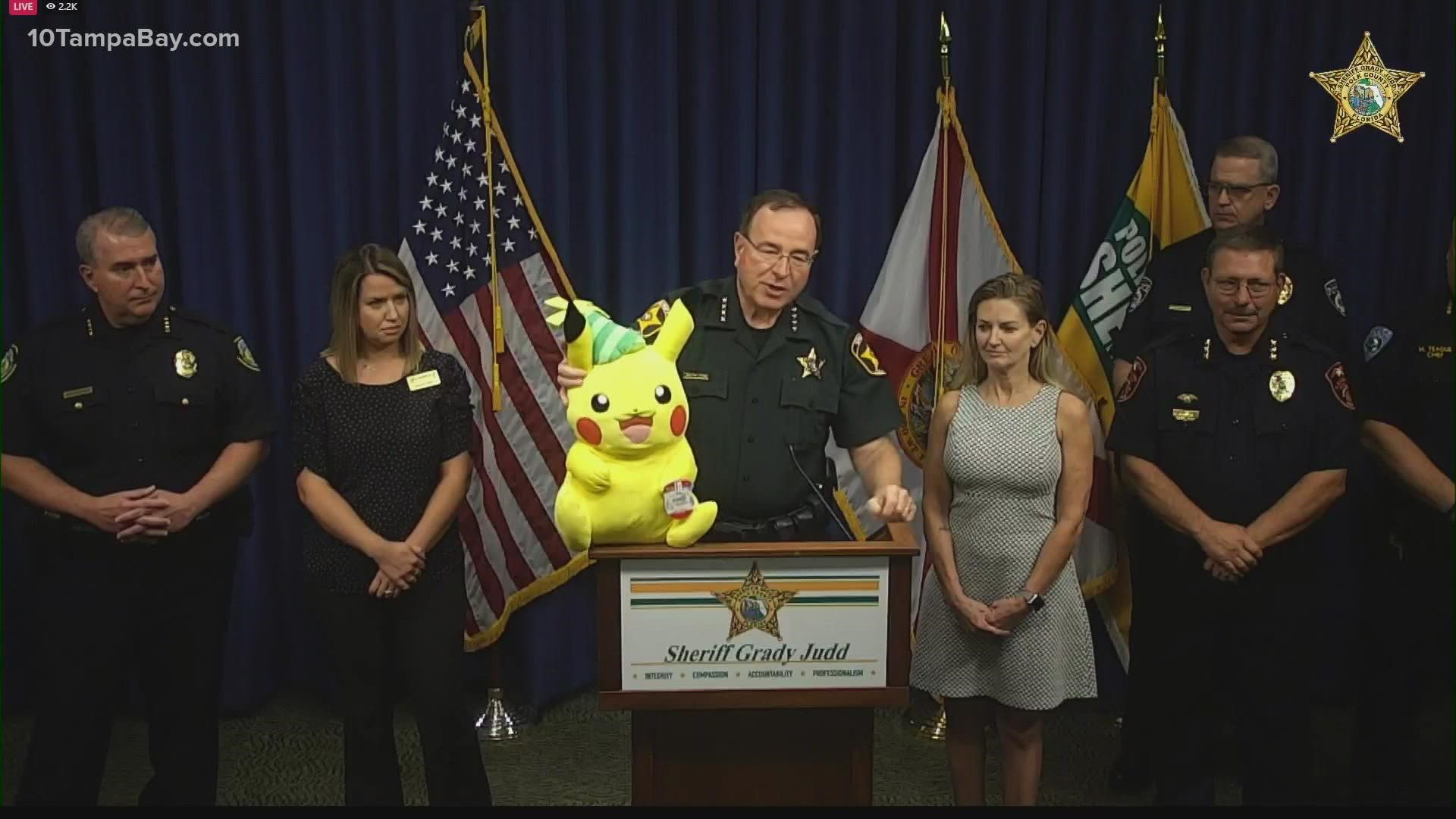 WINTER HAVEN, Fla. — Over a span of six days, 102 people were placed under arrest as part of an undercover operation led by the Polk County Sheriff's Office to disrupt human trafficking, the agency said.

Two men among the group reportedly were caught trying to meet with someone they thought were children online.

Theodore Jones, 27, believed he was talking to a 13-year-old girl, the sheriff's office said. Deputies say he sent messages to her, including explicit nude photos of himself.

Polk County Sheriff Grady Judd brought a Pikachu-stuffed doll to a news conference Thursday morning claiming that it was a "non-willing co-conspirator" in the 27-year-old's case. The sheriff put up a photo that he said showed the toy and Jones together.

Jones reportedly told the child he thought he was talking to, "We want to cuddle with Pikachu and have sex in the back of the car."

Jones works as a cook in Disney Springs and was arrested there on a Polk County arrest warrant, the sheriff's office said. Judd says they found Pikachu in the back of the car and "rescued" him.

"Pikachu said, 'I didn't like the dude from the beginning,'" Judd joked.

Jones was charged with the use of a computer to seduce a child, two counts of transmission of material harmful to a minor and use of a two-way communication device to commit a felony.

Donald Spencer, 64, reportedly posted an ad online stating he wanted someone to "make love with." Deputies say he thought he was talking online with a 14-year-old and planned to meet her.

He was arrested and charged with traveling to meet a minor after the use of a computer to seduce a child and attempted lewd battery.

“The primary purpose for these operations is to identify victims of human trafficking and those who prey on the victims, as well as the deviant child predators who stalk children online," Judd said. "We work hand-in-hand with organizations to get help for the victims of human trafficking. We identified three possible victims during this investigation.”

This investigation, known as "Operation No Tricks No Treats" began on Oct. 20 with the help of officers from the Auburndale, Haines City, Lake Hamilton, Lake Wales and Lakeland police departments.

Meetings were arranged with undercover cops through internet advertisements at different locations around Polk County.

According to the sheriff's office, three people who came to the undercover location to commit prostitution were possibly people forced into human trafficking, one of them being a minor. The detectives worked with Selah Freedom, One More Child, Heartland for Children and Children’s Home Society Child Advocacy Center for help.

Each person arrested for prostitution was given access to the members of anti-trafficking organizations and was offered assistance, according to a news release.

There was a total of 38 people arrested for offering to commit prostitution, four of which have a history of being arrested, which is a second-degree misdemeanor, according to the sheriff's office. Two of the 38 arrested were possibly adults in human trafficking.

Sixty-two people were arrested for soliciting a prostitute, which is a first-degree misdemeanor. The sheriff's office says five of them had been previously arrested for the same thing.

"If you play Pokemon or you're familiar with that, the [slogan] is something like 'Gotta catch them all,'" Judd says. "Well, our detectives from the sheriff's office and the police departments...we caught a bunch of them."