Iconic kissing statue in Sarasota will be moved to new location

The city decided what to do with the 26-foot tall “Unconditional Surrender” sculpture to make room for a new roundabout. 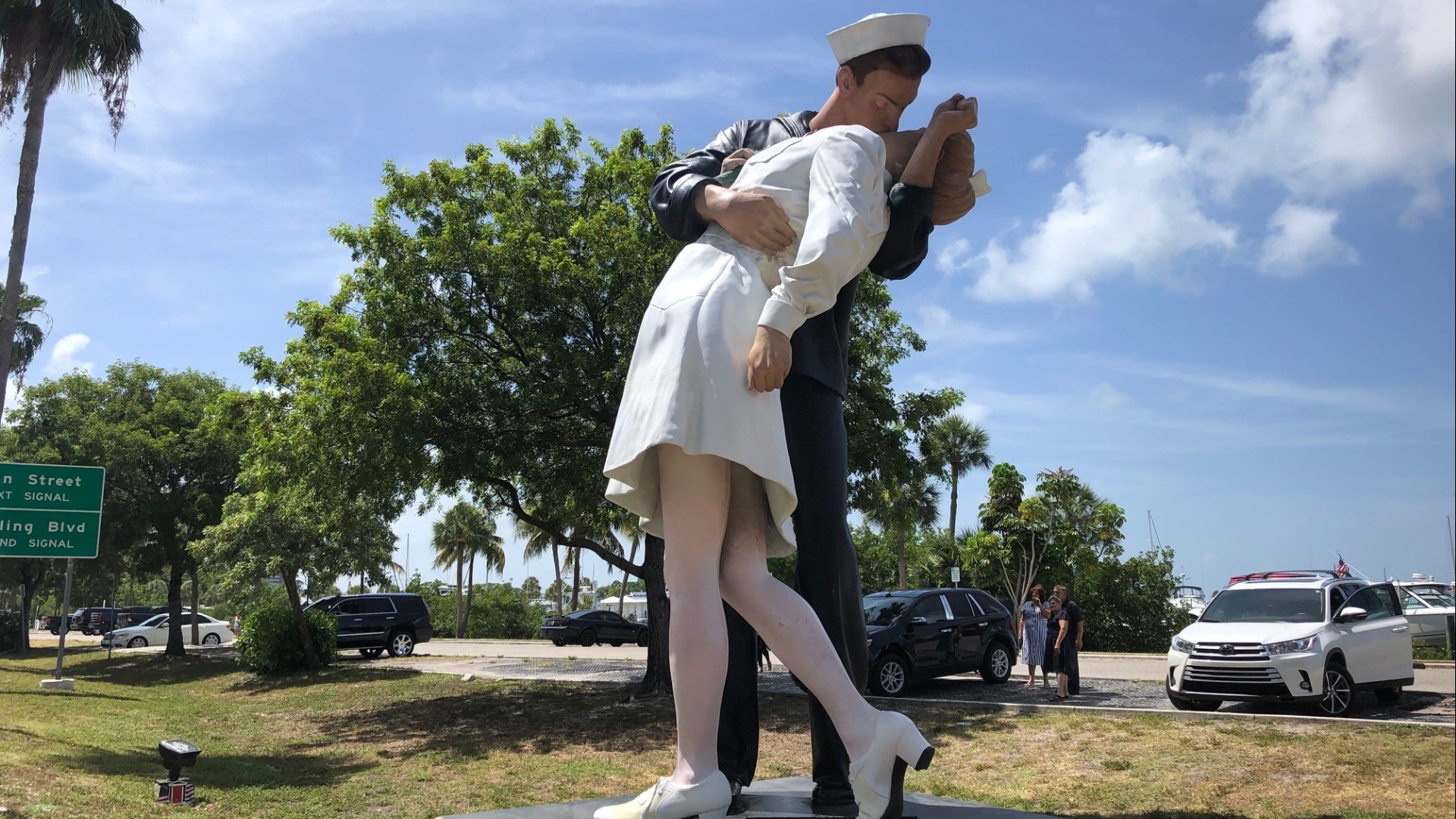 SARASOTA, Fla. — Commissioners voted 4-1 to keep the statue on the bayfront and move it between Marina Jack's and O'Leary's. The city must move it by Jan. 15, 2021, so construction on the roundabout can start in February.

To make room for a new roundabout on U.S. 41 and Gulfstream Avenue, the iconic kissing statue on Sarasota’s bayfront must be moved.

The roundabout is part of the city’s bayfront connectivity plan, which former Mayor and now City Commissioner Jen Ahearn-Koch says the city decided on 10-12 years ago.

The plan includes a series of roundabouts on U.S. 41 to increase connectivity, to beautify it, make it easier for people to cross the road and make the traffic flow better.

But with construction close to starting, the city needs to decide what to do with the 26-foot tall “Unconditional Surrender” sculpture.

The iconic statue has been on Sarasota’s bayfront for a decade, and some commissioners feel it should stay near its present site at the north end of Bayfront Park.

“It’s extremely popular with the community, tourists,” Commissioner Liz Alpert said. “I never go by there without somebody being there taking their pictures with it, so I think in light of all that it’s just something I think we need to keep it on our bayfront, that’s where most people in our community want it.”

Ahearn-Koch, on the other hand, thinks it needs a new home. She doesn’t want the statue to be a distraction to drivers.

“I really don’t think it’s a smart idea to have something that is an attraction visually anywhere in the vicinity of a roundabout,” Ahearn-Koch said. “We really want people focusing on the roundabout.”

On Monday, Nov. 16, city commissioners will consider their options and decide whether to move the kissing statue to a new permanent site or instead place it in temporary storage until after the roundabout on U.S. 41 and Gulfstream Avenue is completed next spring.

“This is a brand-new commission, so I don’t know how this commission is going to be on any topic at this moment, but I do know there’s a lot of community support for it,” Alpert said. “It’s to many a symbol of a very joyous day. The end of World War II.”

But Ahearn-Koch says the commission also needs to take into consideration those who don’t like the statue. Some say the sculpture depicts an incident of unwanted sexual intimacy.

“I don’t want to discount the people who are concerned about the message that this sculpture sends because that should be taken into consideration,” Ahearn-Koch said.

If enough commissioners agree, the statue could be put in storage for good, something Alpert does not want to see happen.

“I am for moving it to a location between Marina Jack's and O'Leary's. “I think if we put it in storage we just put off the decision that I think should be made today,” Alpert said.

Ahearn-Koch also has a legal concern surrounding the kissing statue.

“We certainly don’t want to put the city at any risk.”

Not to mention, to move this statue, whether it be to a new location or storage, it won’t be cheap.

“It is going to be costly to do it, but we really have to do it, one way or the other it’s got to be moved,” Alpert said.

She says the city has allocated to spend around $65,000 to move it and build a new base for it.

Cost-wise, Ahearn-Koch believes the commission should take the recommendation of the city’s Public Art Committee to relocating the “kissing sailor” sculpture to the Sahib Shriners building at 600 N. Beneva Road.

“They said they would take it temporarily while we sort of figure out all of the legal issues and they would also pay for it which is a huge benefit,” Ahearn-Koch said.

She thinks this could be a win-win situation.

“Still on display, doesn’t cost the city any money and we try to sort out the copyright infringement and structural issues,” Koch said.

Three people on the commission need to be on the same page and vote together for the fate of the statue to be determined.