A letter said the narrative was removed from a "vocabulary practice text" because it "contained content that may be controversial and in conflict with FDOE." 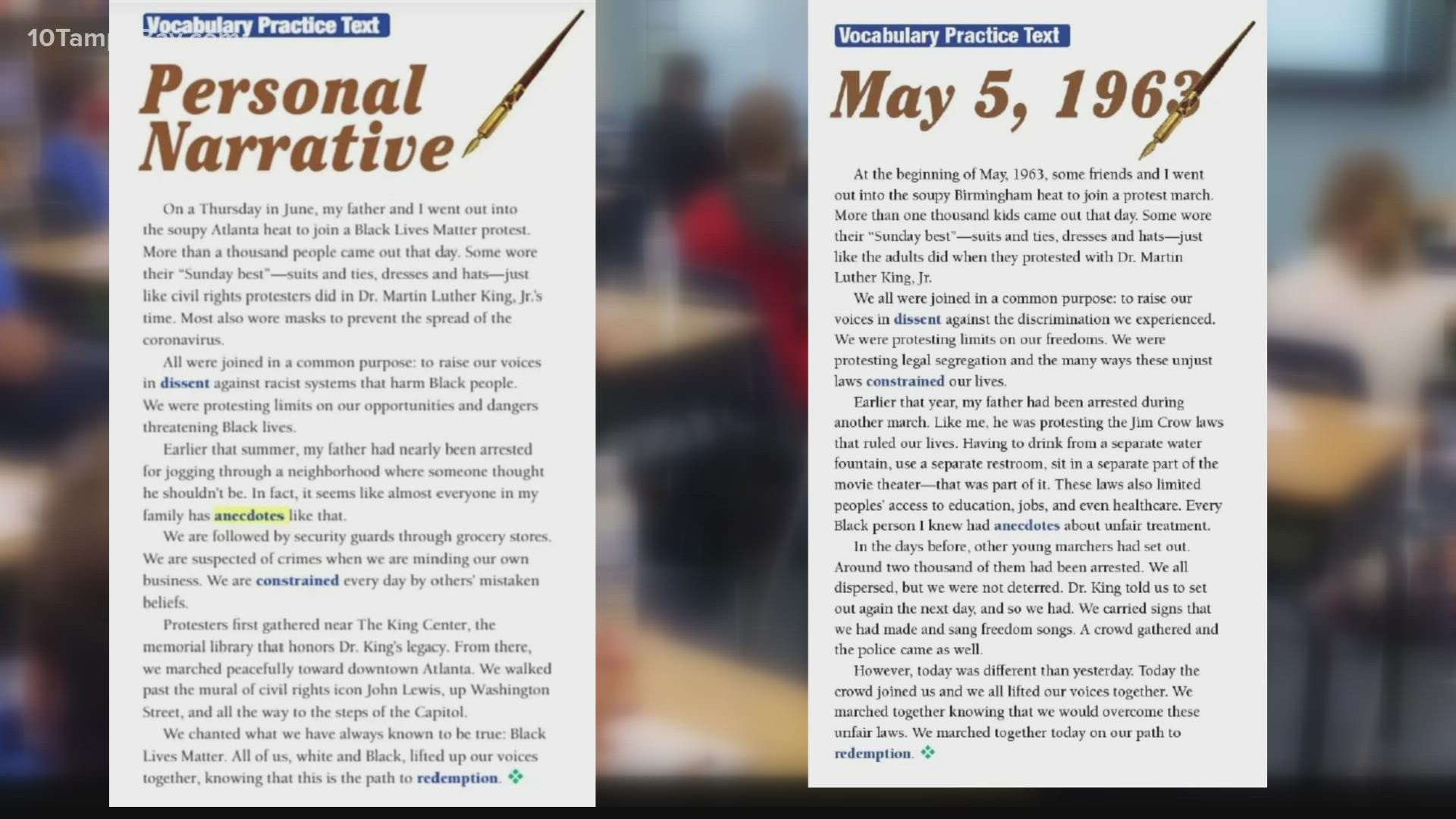 SARASOTA COUNTY, Fla. — Editor's Note: The photo above is from June 2020 in Atlanta.

District leaders wrote in a letter sent to parents last week that the narrative was removed because it was in violation of the Florida Department of Education's ban on teaching critical race theory in public schools.

The letter stated the narrative was removed from a "vocabulary practice text" section of the curriculum because it "contained content that may be controversial and in conflict with FDOE's requirements," the district said in its letter to parents.

The narrative in question told the story of a child and father attending a BLM protest in Atlanta in June 2020, which reflected recent contemporary history.

It was replaced with a similarly-worded narrative that was instead placed back in time, during a May 1963 Civil Rights March in Birmingham.

The passages both described a child's reflection on inequities and experiences driven by race and prejudice.

However, with the exception of time in history and location, the evident difference between the passage that was removed and the one it was replaced with is the reference to BLM.

The district said a group of teachers and curriculum specialists who review educational curriculum to ensure it's in compliance with state mandates had found the narrative ahead while reviewing study materials for the 5th-grade class.

They said the passage had not been available at the time reading materials were initially selected.

Critics of the school district's action say removing the passage which is a reflection of a contemporary event, which many of the students themselves witness, amounts to censorship and sanitization of history which they say is at the detriment of both the students learning and the society at large.

"Banning the teaching of important milestones in our nation’s history is a DETRIMENT to our children and does them a HUGE disservice," Civil rights lawyer Ben Crump tweeted in response to the situation. "By replacing the story set during the 2020 protests, it is clear that this district is attempting to alter our nation’s history. Unacceptable!"

Trevor D. Harvey, president of the Sarasota NAACP, was unavailable for an interview Monday but referred us to comments he made in a Patch article, where he said the narrative's removal had "nothing to do with" critical race theory.

"If you truly and honestly understand CRT you will recognize the way it was written has nothing to do with CRT at all…I get so frustrated," Harvey told Patch. "The minute somebody says 'Black' or something about slavery, they automatically relate it to CRT, and this is not CRT. It's just not."

Below is the narrative that was removed. It references a child's reflection on a Black Lives Matter protest in Atlanta in June 2020 after attending with their father.

Below is the narrative that replaced the previous one. It references a child's reflection on a Civil Rights March in Birmingham in May 1963 which the child attended with their father.

The purpose of this correspondence is to communicate with you about a reading passage that is in an upcoming unit of study.

Over this past summer, the Florida Department of Education (FDOE) updated its requirements regarding the teaching of certain topics.  Amongst these changes was a mandate that school districts not teach content that constitutes “Critical Race Theory”- which FDOE defines in the Florida Administrative Code, Section 6A-1.094124 as “the theory that racism is not merely the product of prejudice, but that racism is embedded in American society and its legal systems in order to uphold the supremacy of white persons”.

Since the enactment of this prohibition, the teachers in our schools and curriculum specialists have and continue to review our educational curriculum to ensure its compliance with state mandates. Together, they strive to identify, select and teach required content that both satisfies the diverse curiosities and belief systems of all students.

In preparation for an upcoming unit of study in 5th grade, it was discovered that the student book contained some vocabulary passages that were not available for review during the adoption process. After further review, it was noted that one of those passages contained content that may be controversial and in conflict with FDOE’s requirements. For this reason, the School District, after consultation with the Department of Education and the textbook publisher, has decided to remove the passage in question from the upcoming unit and replace it with an alternate passage with content that touches upon these sensitive topics in a manner that more clearly conforms with state guidelines.

Please note that we will continue to proactively review the content taught to your children to ensure that it is in alignment with state standards and FDOE requirements.  We value our partnership with you and appreciate that without transparency, communication, and your support, we cannot achieve the high expectations we seek regarding educating your children.

RELATED: What is critical race theory and why is everyone talking about it right now?