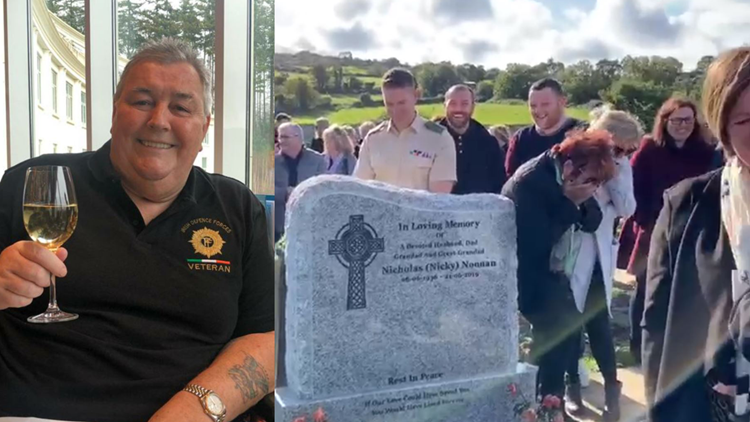 Photo by: Andrea Bradley
Shay Bradley got his dying wish to make everyone laugh at his own funeral.

'Let me out!': Man gives family one last laugh at his own funeral

When it was time for a Dublin man's funeral, he made sure his family had something to laugh about as they gathered to mourn their loved one.

Andrea Bradley explained in a Facebook post that it was her dad, Shay Bradley's, dying wish to have a very particular audio recording played during his funeral in Ireland.

So as everyone stood by his grave, speakers placed nearby began to play bagpipe music...that is until Shay Bradley himself chimed in.

"Hello? Hello! Let me out," Shay Bradley exclaimed in the recording, while knocking is heard as if he had suddenly woke up in his casket.

"Is that the priest I can hear? Let me out," Shay Bradley added. At one point later on he even starts serenading the crowd at his funeral.

Her dad's final prank had many family members cracking up, which is part of what Shay Bradley hoped to accomplish, according to his daughter.

Andrea Bradley explained in a message that this was her dad's way of saying goodbye and to let everyone know the sadness should stop and they should be celebrating his life. But she said he also wanted to make sure that his wife could have a smile on her face as she left the cemetery.

"They were childhood sweethearts, she was his world, and he wanted to make sure she would be laughing on the saddest day of her life," Andrea Bradley said in a message.

RELATED: A man's dying wish was to help a boy in foster care he never met. It was fulfilled weeks after his death.

RELATED: Not your typical obituary: ‘I finally have the smoking hot body I have always wanted...having been cremated.’