Leaders in Tallahassee have discussed the topic informally, while other lawmakers have introduced legislation to try and address the issue. 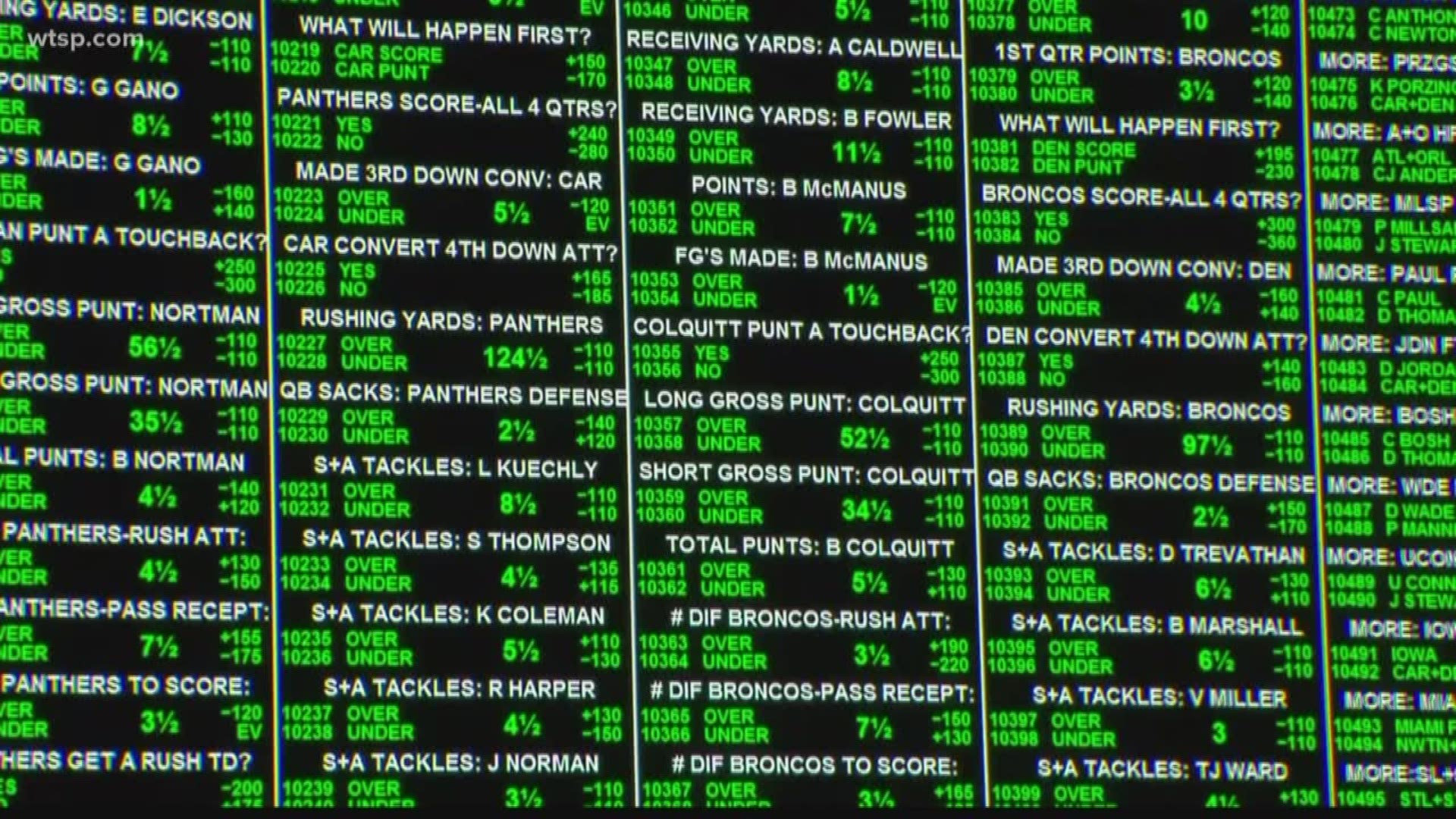 ST. PETERSBURG, Fla. — As Florida gets ready for Super Bowl 54 in Miami this weekend -- and with Super Bowl 55 in Tampa next year -- it’s hard to ignore one big (and controversial) aspect surrounding the big game: gambling.

The American Gaming Association says Americans will bet more than $6.8 billion on this year’s Super Bowl.

But point spreads aren’t just a hot topic of conversation around the stadium. The issue is also being talked about in Tallahassee this week.

HOW IT COULD HAPPEN?

Leaders in Florida’s House and Senate have discussed the topic of legalized sports gambling in the state informally while other lawmakers have introduced legislation to try and address the issue.

And remember, Florida voters may need to be part of the conversation as well under Amendment 3, which was approved by voters in the 2018 election.

“Amendment 3 definitely hampers the legislature’s ability to enact anything proactively expanding gambling here in Florida,” said Marc Dunbar, who teaches gambling law at Florida State’s Law School and represents the Seminole Tribe. “There are a couple of limitations and loopholes that exist: one, for example, is a tribal compact with the Seminole Tribe of Florida who has put more than a billion dollars in gambling revenue into the state treasury and has done a lot of very positive things for Florida’s economy. "

“The legislature could choose to work with them and put in place a new tribal compact, that would not have to be approved by Amendment 3.”

“Other than that,” he added, “Amendment 3 pretty much closed the door on the legislature’s ability to unilaterally expand gambling to try and get some of the new offerings, such as sports wagering, or to try and expand the existing offerings like, for example, to put a casino in the Tampa Bay area.”

WHEN COULD IT HAPPEN?

The “if” is the biggest question surrounding legalized sports gambling in Florida. The “when” is the second-biggest question. While lawmakers have a number of options at their disposal, the prospect of legally placing bets on sporting events in the state anytime soon is unlikely.

Dunbar says he’s “not sure the soup is right for this legislative session” as a realistic time frame for legalizing sports betting, but he says he expects leadership in Tallahassee to consider the issue more and more seriously moving forward. Ultimately, he says, the governor will be the biggest factor.

“In reality, Gov. DeSantis has all the cards in this,” said Dunbar. “The statute is clear as it relates to a tribal compact, it must initiate with the governor. And, on the backside of it, any legislation has to be signed by the governor. So, while the legislature may have their opinions and they may have these informal discussions going on and the Senate president is an extremely powerful position, as it relates to this issue absent leadership from Gov. DeSantis on what he wants. I think it’s going to be difficult for the legislature to find a pathway to consensus.”

“I think Florida, like a lot of other states, would be a very attractive market,” said Dr. David Schwartz, a Gaming Historian at UNLV’s Center for Gaming Research. “I think you’ve got a bunch of interested players, a bunch of groups who want to be involved. I think you also have a government that, at the end of the day, is going to want to do something to get more revenue coming in. So, I think an agreement, even though it may not look likely now, it is definitely possible.”

HOW MUCH $$$ DOES FLORIDA STAND TO MAKE?

“A lot of misinformation exists around the amount of money that the state can derive directly from sports wagering. Sports wagering does not generate a lot of direct tax revenue,” said Dunbar. “However, there is a lot of money for the state of Florida in sports wagering indirectly. Sports wagering is a destination activity, if you look at the hotel room nights in Las Vegas they spike significantly in the month of March, why? Because of March Madness. They spike significantly around the Super Bowl, why? For obvious reasons, people are going to wager in Vegas on the Super Bowl.”

“Florida is uniquely positioned because it’s a destination tourist state,” he added. “You could add this amenity and you would be able to capture not just the tourists that we have coming to the state now, but also that recreational gambler that likes to travel from time to time and travel for sports wagering. And, while they’re also here, the benefit is hotel rooms, meals at restaurants, golf courses, etcetera, and that’s what the state of Florida should really focus on if they’re going to go down that road.”

“In Nevada, sports gambling is about two percent of the overall gambling picture so, it’s pretty small,” Schwartz said in a phone call. “Obviously you’ve got a tax on that small percent. The main idea, I think, isn’t so much using it to generate revenue, even though that’s a concern for a lot of lawmakers, it’s saying people and citizens want to do this, why not have them be able to do it legally which has a lot of public policy benefits where they’re not doing it with illegal bookmakers.”

“It would be a shame for Florida to miss the opportunity,” Dunbar said. “I believe nineteen states have jumped into the sports wagering industry, but nobody is a tourist mecca like Florida.

“We could move the needle, not just nationally but internationally if we were able to jump into this space; and it would be a shame if we weren’t able to get through and really have a discussion just about that issue and what it could mean to Florida.”

10News Cares: The National Council on Problem Gambling operates a helpline, which can be reached at 1-800-522-4700. If you have a gambling problem, the line will help connect you to call centers that offer resources and referrals. Help is confidential and available 24/7. Click here for more information.