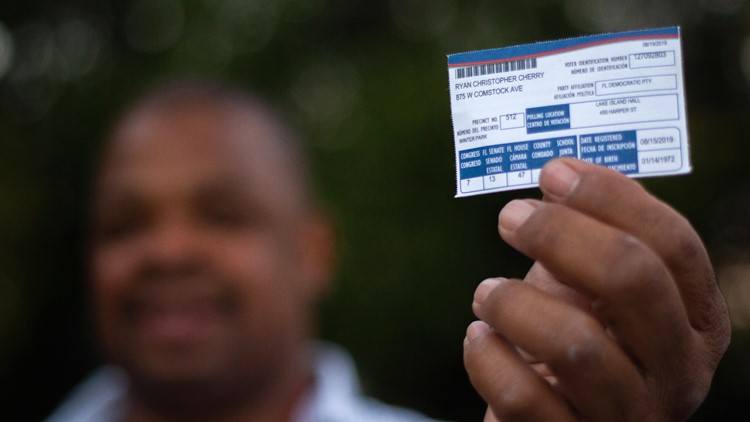 TALLAHASSEE, Fla. — After serving two stints in Florida prison in the 1990s for felony theft and cocaine possession, Ryan Cherry returned home to his family in Orlando to start his own air conditioning business.

Cherry, 48, tried to register to vote after Florida voters approved a constitutional amendment in 2018 restoring the voting rights of felons, but then learned he still owed more than $300 in court fines and fees. Until those were paid, it would still be illegal under Florida law for him to vote.

Provisions of that law are in dispute as part of a pending federal lawsuit.

“I never knew I had fines and court costs until I did a bunch of research,” Cherry said.

He said he never received letters, calls or internet notices from a collection agency about his overdue balance and said he could not find any record of it online. Without Cherry’s subsequent efforts, spurred by his desire to vote, it’s unlikely the fees and fines in his case ever would have been repaid.

A new government study shows Florida courts have a remarkably difficult job collecting fees and fines in criminal cases – failures that now have a direct impact on the ability of felons to vote in future elections after they serve their prison sentences.

Of more than $315 million in fines and fees assessed in 2017 and 2018, the study by the Florida Legislature’s Office of Program Policy Analysis and Government Accountability found that state circuit courts – where most criminal cases are adjudicated – collected less than 10 percent of the money owed.

Duval County, which includes Jacksonville, collected only about four percent.

“We are continually working to improve on ways to make it easier for people to come into compliance with their outstanding court fines and fees,” Orange County Circuit Court spokesman Dain Wester said.

He said the clerk, Tiffany Moore Russell, was aware of the low collection rates. He said once each year, the court waives the 25 percent surcharge on amounts turned over to collection agencies to encourage repayment.

Florida’s circuit courts face the additional challenges of collecting hundreds or thousands in fines or fees owed by felons, whose criminal records can interfere with finding a job. The situation is worse for felons with mental health problems or who abuse drugs.

“Once you have a felony arrest on your record, it’s almost impossible to rent an apartment, buy a car, get any credit,” said Gil Singer, a partner at the Tampa-based Marcadis Singer law firm, which represents lenders and creditors but does no work for Florida courts.

“They can’t afford to pay. They don’t get into jobs that give them the ability to repay these things. It’s as simple as that.”

Singer said the court collection rates were “not terrible,” considering those circumstances.

The outstanding amounts of overdue debt owed by felons in Florida hints at the scope of the simmering legal and political dispute that could affect who wins the 2020 presidential election. Civil liberties groups are suing in federal court over a Florida law that requires felons to pay all fines and fees before they can vote, even after their release from prison.

“What this really comes down to is saying you have to pay to vote, and that’s plain wrong,” said Micah Kubic, executive director of the ACLU of Florida, one of the groups suing.

The outcome of the legal case could decide whether tens of thousands of felons in Florida can vote in November. In 2016, Donald Trump – who last year established residency in Florida and regularly visits his Palm Beach resort – won the state by fewer than 113,000 votes.

In Orlando, Cherry said his felony convictions discouraged employers from hiring him. He started his own air-conditioning business to earn a living.

The difficulty that Cherry experienced figuring to whom he owed money and how much wasn’t unusual, either. In an early ruling in the federal case, U.S. District Judge Robert Hinkle in Tallahassee noted there is no centralized office tracking fines and fees across courts in Florida’s 67 counties. Amounts owed in older court cases can be especially difficult to determine because court records might not be immediately available.

Cherry enlisted help from a prisoner advocacy group, the Florida Rights Restoration Coalition, to determine how much he owed. The coalition paid his fines and fees after Thanksgiving. Cherry registered as a Democrat and plans to vote in the March presidential primary and November’s general election.

“Everyone should be able to vote,” he said. “It seems like it’s designed to keep us held back.”

RELATED: Florida felons must pay up before voting in 2020, court rules