Tampa Bay is one of the worst areas for wrong-way crashes. Here's what Florida is doing about it

Hillsborough, Pinellas and Pasco made the top 10 list of most wrong-way driving crashes in Florida. 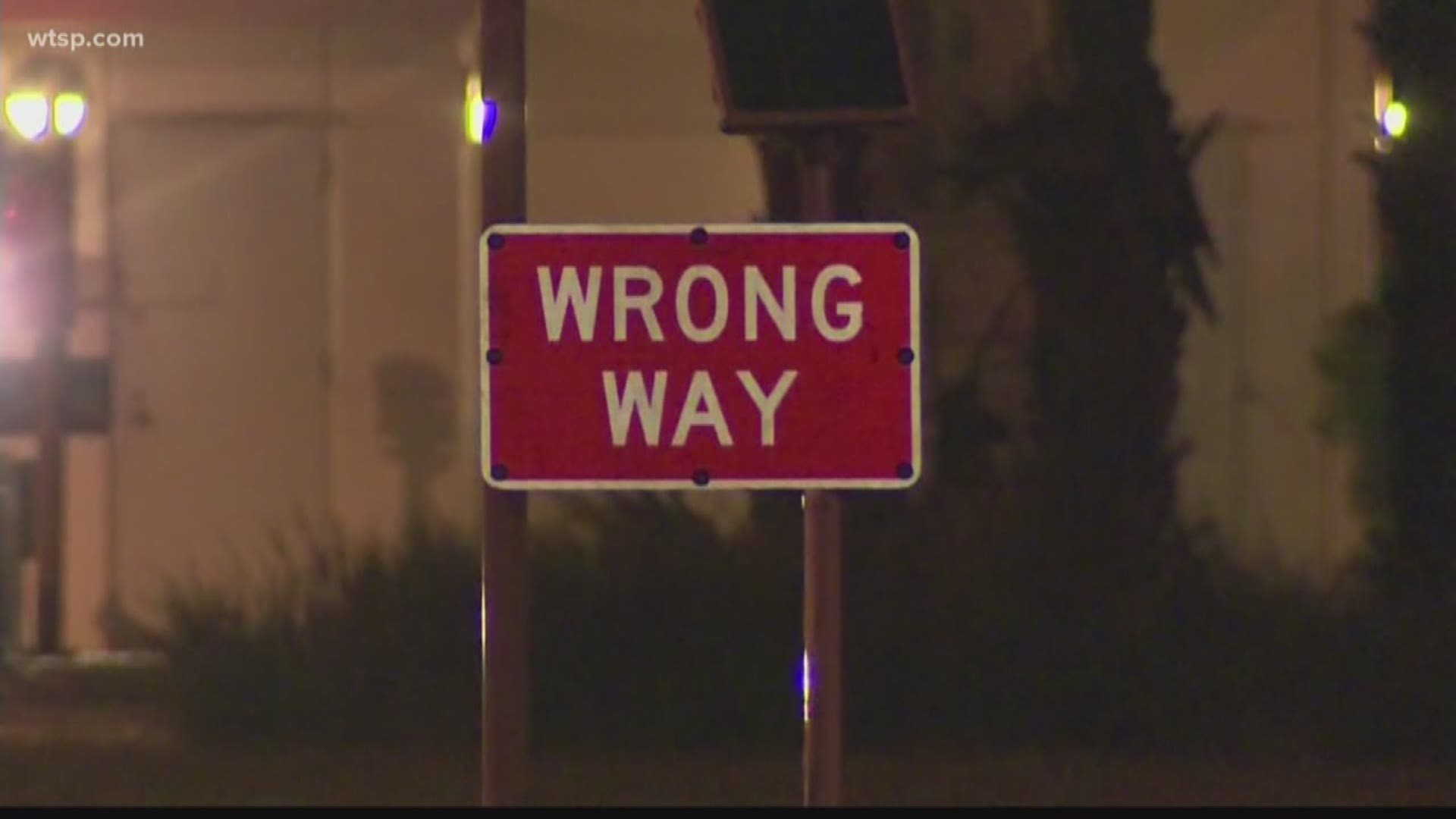 When a Pinellas Park man drove the wrong way on the Howard Frankland Bridge Friday morning, his car crashed head-on into a van, killing himself and seriously injuring another person.

Florida Highway Patrol said the man had made a U-turn on the bridge and had been drinking.

These types of crashes are not an anomaly in Florida, and Tampa Bay is one of the worst areas for wrong-way crashes.

The Department of Safety and Motor Vehicles reported the majority of wrong-way crashes result in vehicles being hit head-on. Eighty-one percent of all wrong-way fatalities are head-on collisions.

A study by the Florida Department of Safety and Motor Vehicles found Florida had 1,490 wrong-way crashes and 96 fatalities in 2015.

According to the report, three Tampa Bay counties made the top 10 list of most wrong-way driving crashes in the state: Hillsborough was fourth, Pinellas was sixth and Pasco was eighth.

In Tampa Bay, 2014 was a particularly deadly year for wrong-way crashes. The year was capped by a Christmas Day wrong-way crash that killed three people in Pinellas County. There were at least eight other reports of wrong-way drivers that year.

Since then, the Florida Department of Transportation has installed flashing, wrong-way signs at some of the area's most notorious roads and on-ramps. FDOT spokesperson Kris Carson said all on-ramps for Interstate 275 have traditional wrong-way signs, but dozens of ramps have additional flashing signs as well.

Carson said the department acknowledges that wrong-way driving is a major issue in the area and said many of the incidents are related to drinking and driving.

Carson said the sign activates if a driver goes the wrong way on a ramp and notifies FHP at the FDOT's traffic management center so law enforcement can be dispatched. She also said there are markings on the roads leading up to the ramps placed to ensure people travel the right way.

Has this signage helped prevent wrong-way crashes? Carson said FDOT is still getting feedback on the effectiveness of the signs.

She also said FDOT partners at the Florida Turnpike office said they are seeing drivers turn around when they sign starts flashing.

"FDOT is spending a lot of money on signage, but we need a partnership with the community as well to stop drinking and driving," Carson said.

The system of flashing wrong-way signs and an alert system didn't work in February 2017 in Houston.

In Arizona, ADOT installed multi-faceted wrong-way driver detection systems on some of its busiest roadways.

The systems use signage, signals and sounds to stop wrong-way drivers almost immediately, ADOT officials said. Thermal cameras were also recently installed on more than 30 off-ramps and along a 15-mile stretch of Interstate 17 in Arizona, meant to detect wrong-way drivers.

The cameras activate eye-level, flashing wrong-way signs and are able to track the driver and alert law enforcement, who can then broadcast warnings and close freeway entrance ramps.

ADOT began installing the systems late last year, and according to its records, the system has detected more than 15 wrong-way drivers entering interstates.

An engineer with FDOT presented wrong-way driving countermeasure proposals at the FDOT 2017 Design Training Expo and recommended multi-faceted systems to prevent these types of crashes.

The proposed systems include multiple wrong-way signs, reflective strips on ramp medians and more guiding arrows, among other signage.