The team of around 30 pirates only work Bucs home games and would like their next one to be Super Bowl LV. 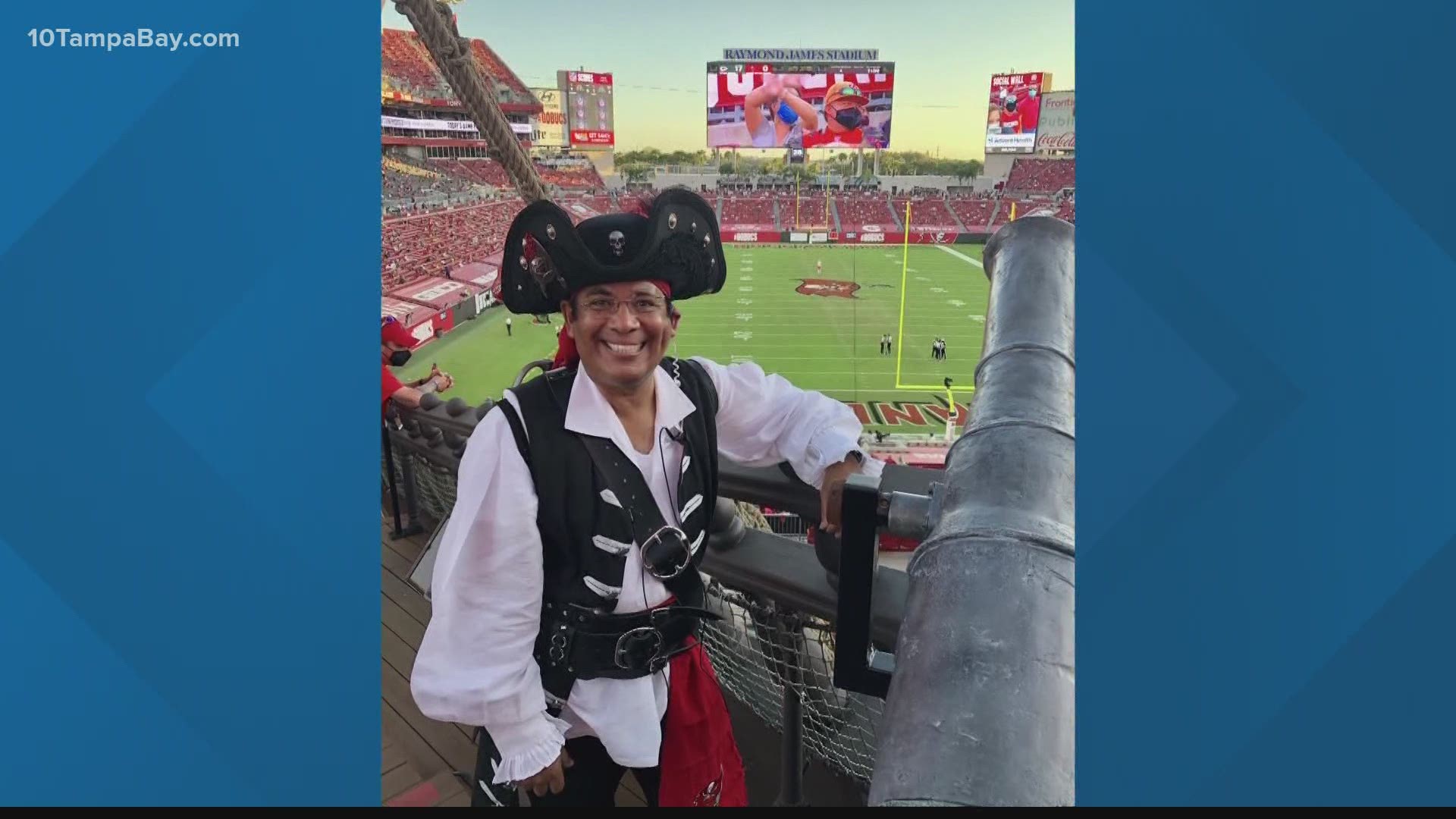 TAMPA, Fla — For those who love football, operating the cannons aboard the Bucs’ pirate ship in the northeast end zone sounds like one of the best jobs in all of Tampa Bay.

And if you ask “Captain Cleve” Johnson, he would most certainly agree.

“It’s exciting,” said Johnson who was first tapped for the job when the Tampa Bay Buccaneers called MacDill Air Force Base down the road looking for volunteers to work the games. “I’ve been doing it ever since.”

Capt. Cleve says he hasn’t missed a single home game in 22 years. He’s been there for the good seasons and the bad but says his job as captain of the Bucs’ pirate ship is far from all fun and games.

“It’s also kind of pressure-packed,” Johnson said. “If the sails aren’t right or the cannons don’t work, especially the cannons, they’ve got to go off on time if they don’t go off at all there’s a lot of radio chatter and people are asking ‘what’s going on what’s going on?’”

Johnson says for that reason he and his team must keep a close eye on the game and especially the officials to ensure the cannons don’t go off prematurely.

“If a cannon fire goes off the wrong time, that’s not good,” Johnson explained. “Not going off is just as important as going off at the right time.”

A control panel filled with buttons is where Capt. Cleve takes control of the ship's cannons. Each button is programmed for a different sequence of cannon fires depending on what’s happening in the game.

Each "boom" has a purpose, with a warning shot fired when the Bucs reach the Red Zone and another shot fired for every point scored.

The cannon fire can be heard outside the stadium, and they’ve been known to startle first-time visitors and even players.

Credit: AP
Fans cover their ears as cannons fire from the pirate ship at Raymond James Stadium during a NFL football game between the Tampa Bay Buccaneers and the New York Jets Sunday, Dec. 13, 2009 in Tampa, Fla. (AP Photo/Steve Nesius)

“Cam Newton was the quarterback one time when we fired the cannons. I don’t know if he wasn’t expecting it or if it was his first time, but he ducked as if he didn’t know where it was coming from," Johnson said with a smile. “For me, it was kind of funny but I guess maybe for the Carolina Panthers, not so much.”

Johnson has 20 years of photos with celebrities and football players who come to explore the ship with their families.

In one video, Brett Favre comes aboard the ship with his grandson who is clearly startled when the cannon goes off.

“The smoke effect is created by CO2 being shot out,” Johnson explained. The concussion cannon, the one that makes the big booms, is propane and oxygen and it’s ignited by spark plug.”

Johnson says in all his years, there’s one game he’s never worked: the Super Bowl.

“As far as the game itself, no I haven’t. I’ve not been able to be in the stadium at all," he said.

That’s because he and his crew only work Bucs home games, and no team has ever played the Super Bowl at home.

“That would be a dream come true for me if they do,” said Johnson who noted even if the Bucs made it to the Super Bowl, it would still be up to the NFL to clear the pirate crew to work.

“The NFL really takes over at that point. It would be up to them,” he said.

It's something he hopes the Buccaneers organization would push for should they end up making history by being the first team to play for the Super Bowl in their own stadium.

“Aside from my daughter being born, yeah, it would be the highlight of my life," Johnson shared.