When it does happen, Boeing Orbital Flight Test-2 will mark the company's second attempt at a successful uncrewed mission to the ISS in two years. 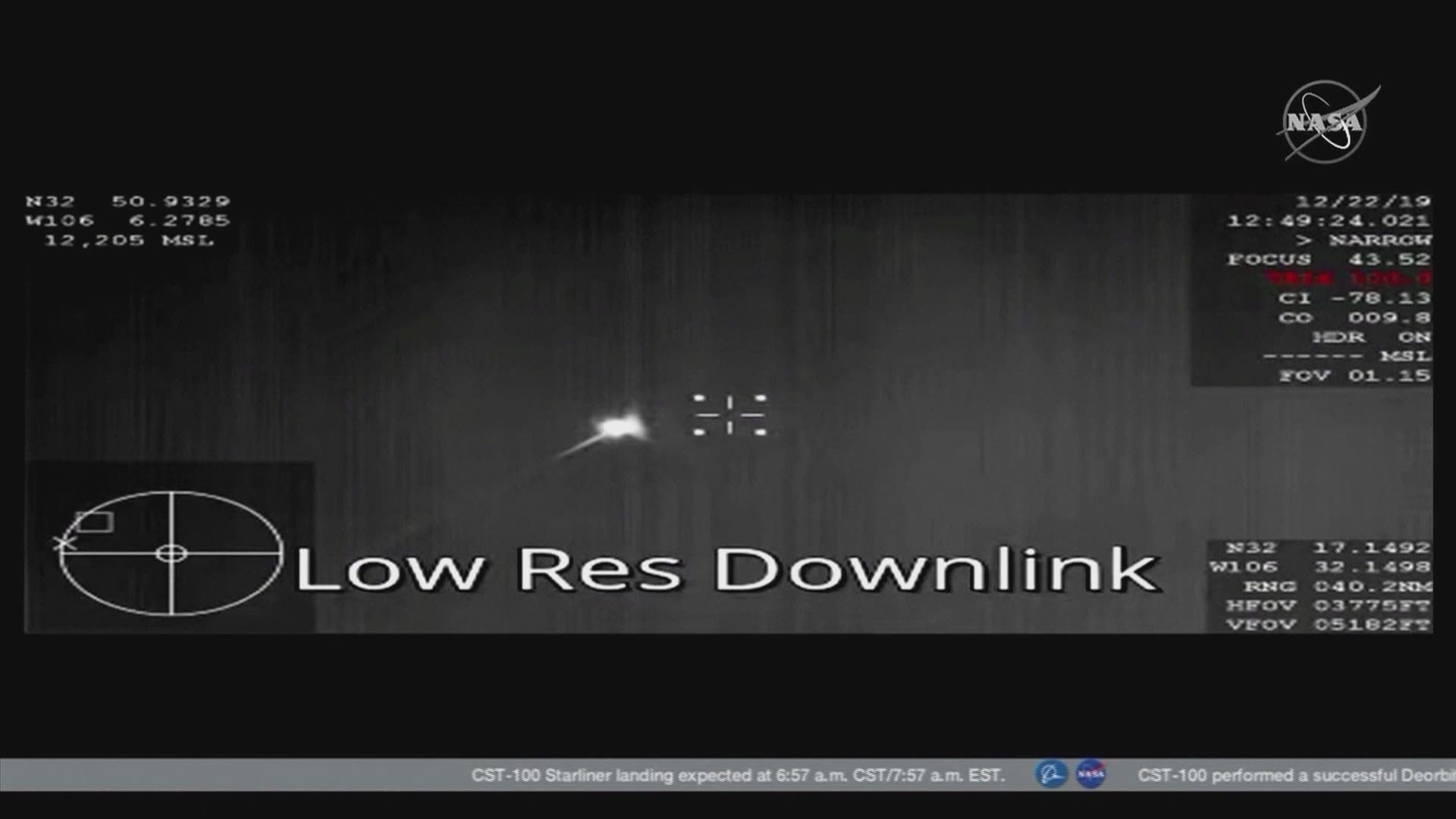 CAPE CANAVERAL, Fla. — Editor's Note: The video in the player above is from Boeing's 2019 Starliner test flight attempt.

UPDATE 2: Looks like the third time won't be the charm for Boeing's Starliner capsule. The private space company says it, along with NASA, has chosen to not proceed with Wednesday's backup launch date after unexpected valve position indications in the spacecraft's propulsion system scrubbed Tuesday's attempt.

"Engineering teams have now cycled the Service Module propulsion system valves with the Starliner and Atlas V on the launch pad and have ruled out a number of potential causes, including software," Boeing wrote.

The company says it needs more time to complete further assessments of the spacecraft. So, that means Starliner will be powered down and rolled back into the Vertical Integration Facility while it awaits its next target launch date.

“We’re going to let the data lead our work,” said John Vollmer, vice president and program manager, Boeing’s Commercial Crew Program. “Our team has worked diligently to ensure the safety and success of this mission, and we will not launch until our vehicle is performing nominally and our teams are confident it is ready to fly.”

We're not proceeding with #Starliner launch tomorrow. Our team cycled the Service Module propulsion system valves and is taking time to gather data for next steps. We've ruled out software as a cause for the unexpected position indications.

“We’re disappointed with today’s outcome and the need to reschedule our Starliner launch,” said John Vollmer, vice president and program manager, Boeing’s Commercial Crew Program. “Human spaceflight is a complex, precise and unforgiving endeavor, and Boeing and NASA teams will take the time they need to ensure the safety and integrity of the spacecraft and the achievement of our mission objectives.”

Teams are now targeting 12:57 p.m. ET on Wednesday, Aug. 4, as the next available launch window. Meeting that target for liftoff is pending the issue being resolved, according to NASA.

Boeing's Starliner is going to have to wait for its second moment in the spotlight after an "unplanned firing" of Russia's new Multipurpose Laboratory Module pushed the International Space Station out of orientation.

Now, both the company and NASA are targeting 1:20 p.m. ET on Aug. 3 as the spacecraft's next launch opportunity to successfully prove its end-to-end capabilities.

Orbital Flight Test-2 will carry the company's uncrewed capsule to the International Space Station before returning back to Earth in an effort to prove it is astronaut-ready.

This will be Boeing's second shot at success after its first test flight ended with Starliner going off course and being unable to dock with the ISS. Several improvements have been made to the spacecraft since the 2019 incident.

If all goes well Boeing could provide the data NASA needs to certify the spacecraft for regular flights of astronauts.

Here's everything you need to know ahead of launch day:

What time is liftoff?

Starliner is then expected to dock with the International Space Station at 1:37 p.m. on August 4.

Why the delay? Well, Starliner had to stand down from its initial launch after an "unplanned firing" of Russia's new Multipurpose Laboratory Module moved the International Space Station out of orientation.

The space agency added that the crew onboard the orbiting laboratory were never and are not currently in any danger due to the shift but that Mission Control Houston is monitoring the ISS's status.

🚀 Tomorrow, a @Commercial_Crew spacecraft launches on a flight test to the @Space_Station!@BoeingSpace's #Starliner is scheduled for liftoff on a @ULALaunch rocket at 1:20pm ET (17:20 UT).

How can I watch the launch?

You can tune in to 10 Tampa Bay where we will be streaming live on Facebook, YouTube and online.

NASA will also have continuous live coverage of prelaunch activities, launch and docking on NASA TV. If you'd rather get in on the action with a community of space lovers, you can attend the space agency's online Launch America event.

There are also in-person options to watch Starliner make its way to the International Space Station, but it will cost you. The Kennedy Space Center is offering three viewing packages ranging from $75 to $250. You can learn more about the options available to you here.

RELATED: What does it take to be a commercial astronaut? The FAA just changed its requirements

RELATED: Where does space begin? It's an argument that's still up for debate

How will the mission work?

Orbital Flight Test-2 will test the spacecraft's end-to-end capabilities, meaning the mission allows experts to assess how Starliner performs from liftoff through re-entry and landing.

It will also put changes made to the spacecraft to the test and, hopefully, prove the system is astronaut-ready.

"The uncrewed mission will provide valuable data toward NASA certifying Boeing’s crew transportation system for regular flights with astronauts to and from the space station," a press release states.

August 3 will also mark the second uncrewed flight of the CST-100 Starliner under the agency's Commercial Crew Program. The spacecraft will get a boost from United Launch Alliance's Atlas V rocket on its ride to space.

According to NASA, it will take 30 minutes for Starliner to reach a preliminary orbit before making its way to the International Space Station for autonomous docking on August 4. From there the spacecraft will spend anywhere up to 10 days docked to the orbiting laboratory before making a desert landing in the western U.S.

During the mission, Starliner will carry more than 400 pounds of NASA cargo and crew supplies to the ISS and then return another 550 pounds of cargo back to Earth.

Will anyone be on board?

The mission will be uncrewed but Boeing says Rosie the Rocketeer will be making the trip. Rosie, the company's anthropometric test device, will sit in the commander's seat in an effort to collect data from sensors in the infrastructure that holds crew seats in place.

Is there anything historic about the launch?

Pending a successful docking at the International Space Station, NASA says Starliner's arrival will be the first time two vehicles from different Commercial Crew companies will be docked at the orbiting laboratory.

What to know about the spacecraft?

One main difference between Starliner and other capsules is that it operates on a parachuted landing instead of splashing down in the Gulf of Mexico or the Atlantic Ocean.

The reusable spacecraft, up to 10 times, uses parachutes to slow its descent back to Earth before deploying an airbag to absorb the shock of landing.

Another feature of Starliner is that it can complete autonomous docking. The system will be tested during the mission, as well as an automated retreat function.

Anywhere up to seven astronauts or a combination of astronauts and cargo can fit inside Starliner, according to Boeing.

Why does Starliner sound familiar?

That's because its first uncrewed test flight made headlines after the capsule hit a snag in orbit and was unable to rendezvous with the ISS. According to Boeing, the capsule's insertion into orbit wasn't normal after an onboard thruster firing failed to occur.

The launch was still considered to be historic for the company that now hopes a second time will be the charm. The Associated Press reported NASA's seven-month-long investigation into the incident revealed 80 corrections were needed to be made to Starliner's software and testing.

Improvements have been made to the capsule since the 2019 incident.

What does a successful mission mean?

If Boeing's Orbital Flight Test-2 proves successful, certification by NASA to carry astronauts to and from the International Space Station could be on the horizon.

"NASA and Boeing are taking another major step on the path to regular human spaceflight launches to the International Space Station on American rockets and spacecraft from American soil with the second uncrewed flight test of Boeing’s CST-100 Starliner as part of the agency’s Commercial Crew Program," the space agency wrote in a press relief.

Boeing says if Starliner's second uncrewed mission meets all of its necessary objectives it will look for opportunities to fly its first crewed mission by the end of 2021. A three-person crew has already been pre-selected for the feat.

See #Starliner roll to the pad atop the @ulalaunch #AtlasV as we prepare for launch August 3.