Laura is expected to be a major, Category 3 storm at landfall with maximum sustained winds of 120 mph. 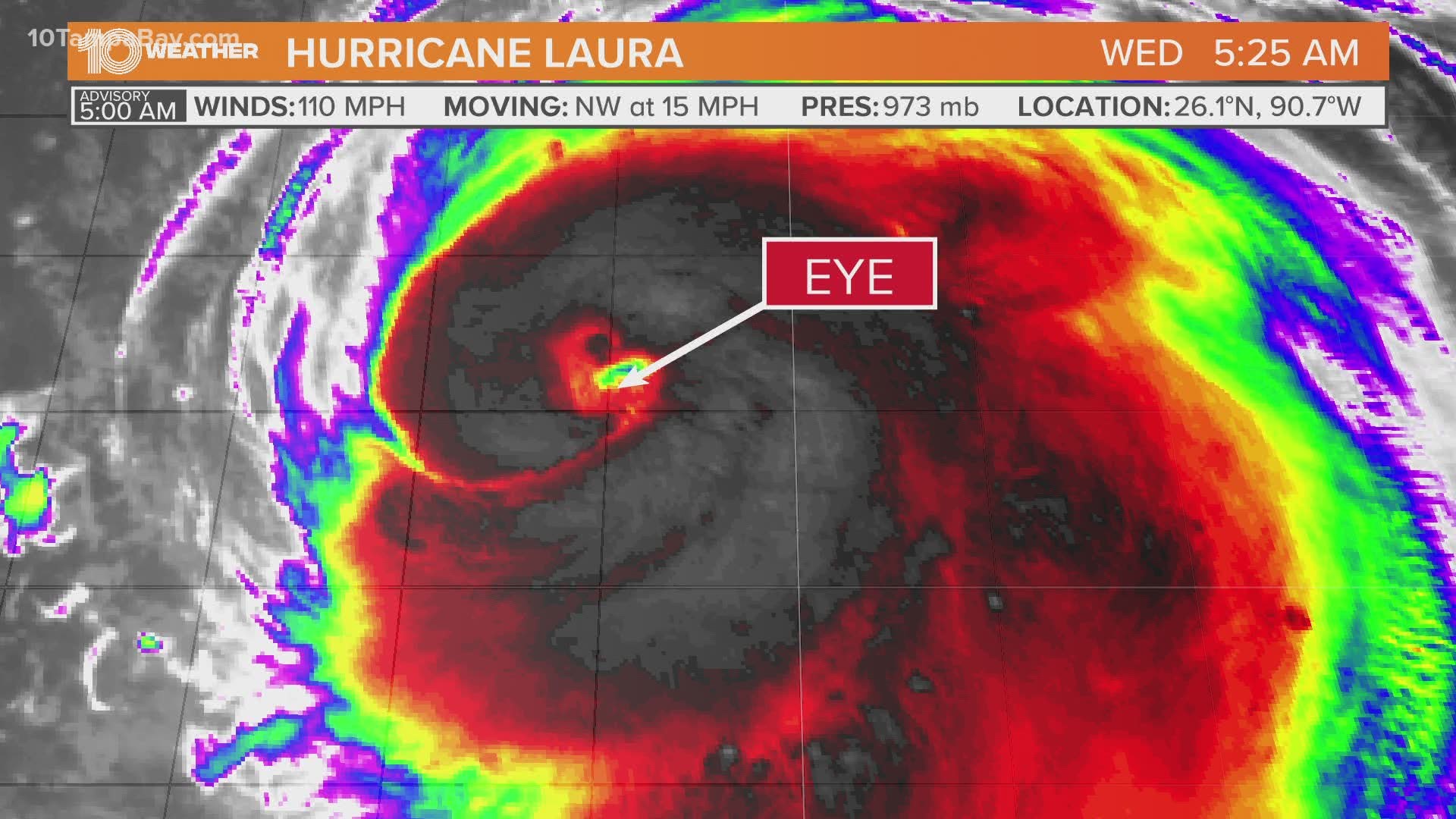 TAMPA, Fla. — Major hurricane-force winds of 120 mph are forecast as Hurricane Laura makes landfall sometime late Wednesday or early Thursday along the Texas/Louisiana coastline, according to the National Hurricane Center.

In addition to the destructive wind threat, "potentially catastrophic damage" from storm surge also is said to be possible from about San Luis Pass, Texas, to the mouth of the Mississippi River.

As the storm continues churning over the central Gulf of Mexico, the ingredients -- including warm sea surface temperatures and low wind shear -- remain there for the storm to rapidly intensify, forecasters said.

This means the 90-mph Category 1 storm, as of the NHC's Tuesday night advisory, could become at least a Category 2 or 3 hurricane in no time. A storm is considered "major" at Category 3 or higher, with maximum sustained winds of 111 mph or greater.

Laura is forecast to be the first major, Category 3 storm of the 2020 Atlantic season.

People who live along the upper Texas and Louisiana coastline, roughly from the Houston metro area to central Louisiana, are warned to finish storm preparations now.

Laura is forecast to bring a dangerous combination of storm surge, rain and wind to the east Texas and west Louisiana coast.

The combination of a dangerous storm surge and the tide will cause normally dry areas near the coast to be flooded by rising waters moving inland from the shoreline. Some areas could see storm surge as high as 9-14 feet.

The deepest water will be along the immediate coast near and to the right of the landfall location, where the surge will be accompanied by large and destructive waves. Surge-related flooding depends on the relative timing of the surge and the tidal cycle and can vary greatly over short distances, according to the NHC.

From Wednesday afternoon into Saturday, Laura is expected to produce rainfall of 4-8 inches, with isolated maximum amounts of 12 inches across parts of the west-central US Gulf Coast near the Texas and Louisiana border north into parts of the lower Mississippi Valley.  This rainfall could cause widespread flash and urban flooding, small streams to overflow their banks, and minor to isolated moderate river flooding.

Hurricane Laura is the earliest "L" name on record, beating Hurricane Luis, which formed on Aug. 29, 1995.

Of course, forecasts can change, especially when we're talking about the tropics. So, keep an eye on the free 10 Tampa Bay app for weather updates in the coming days.