The next storm names are Odette, Peter and Rose. 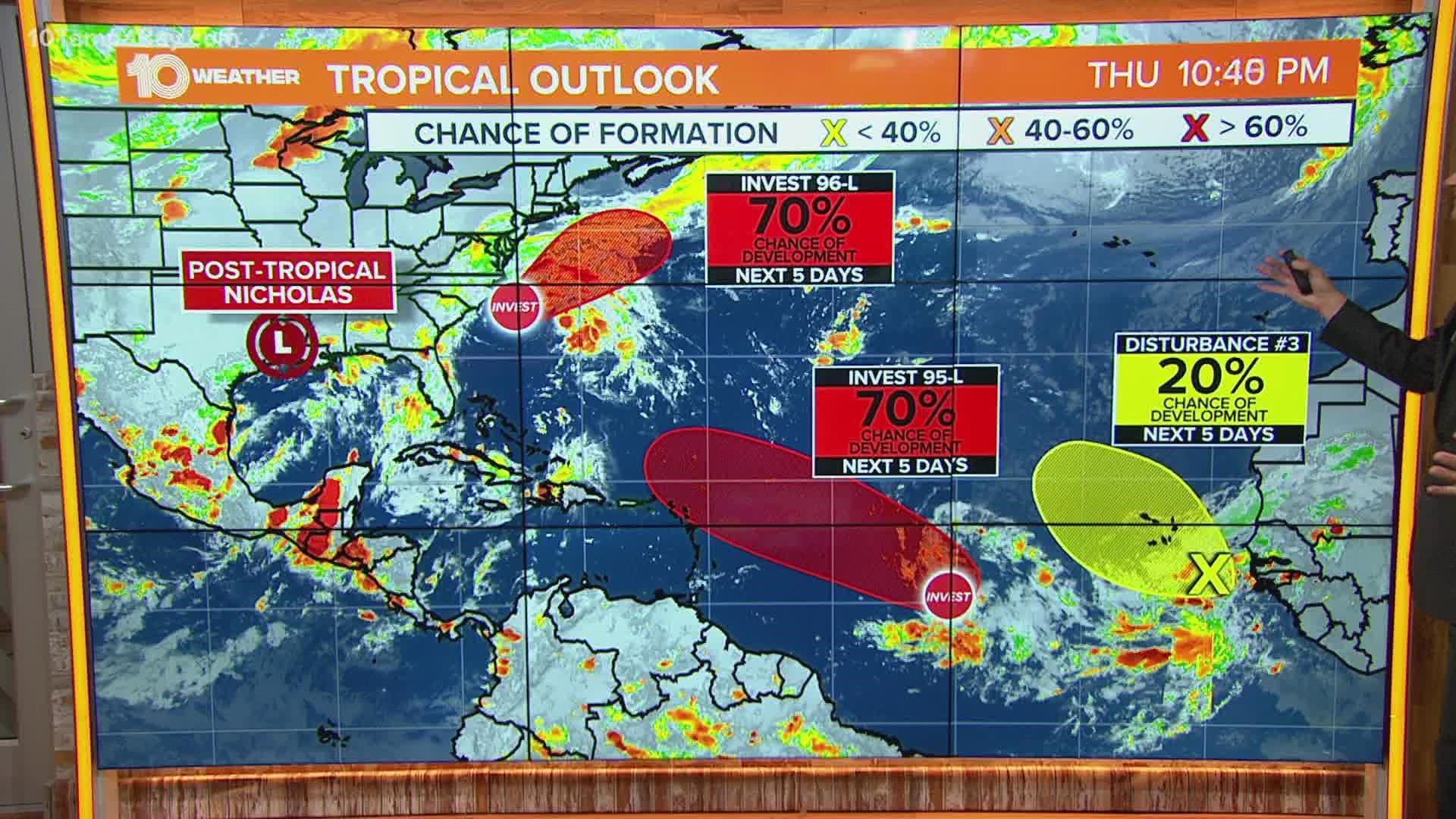 TAMPA, Fla. — The tropical Atlantic isn't giving us any time to breathe five days after the peak of hurricane season.

As post-tropical Nicholas continues to trek slowly across the northern Gulf states, the National Hurricane Center marked three additional areas in the Atlantic basin that need to be watched closely for potential tropical development.

Although no longer a depression, a weakened Nicholas could still cause flash flooding along the central Gulf coast over the next few days.

As it becomes a remnant low, our focus redirects to what's up next.

Even though the system is much weaker than when it made landfall as a Category 1 hurricane on Texas early Tuesday morning, it continues to produce the threat of flash flooding and even an isolated tornado or two. Some places could see an additional 6-10 inches of rain.

Out of the three areas of potential development noted by the NHC, two have a high chance of becoming our next named storms, Odette and Peter.

Showers and thunderstorms associated with an area of low pressure a few hundred miles southwest of the Cabo Verde Islands continue to show signs of organization.

Forecasters have designated this area as Invest 95-L, and it has a 90% chance of becoming a depression or storm within the next five days as it moves west at 17 mph toward the Eastern Caribbean.

It is still too far out to tell if the system will have any impact on the United States. A few forecast models are beginning to show that the storm will be slow to start its turn to the north as it moves into the western Atlantic. This could potentially bring impacts to islands in the northeastern Caribbean and then potentially the east coast of the United States.

Again, it is still too early to say much considering numerous variables that could potentially influence the storm's intensity and path.

Much closer to home, another disorganized area of showers and storms a few hundred miles northeast of the Bahamas is expected to grow.

Designated by forecasters as Invest 96-L, the potential system has a 70% chance of developing into a depression or storm within the next five days as it moves north-northwest at 14 mph.

An elevated risk for rip currents will also be a concern.

Lastly, a tropical wave expected to emerge off of the African coast by the end of the week has a low 20% chance of development over the next five days.

The area of disturbed weather will move into conditions conducive or development as it moves generally west-northwestward over the far eastern Atlantic.