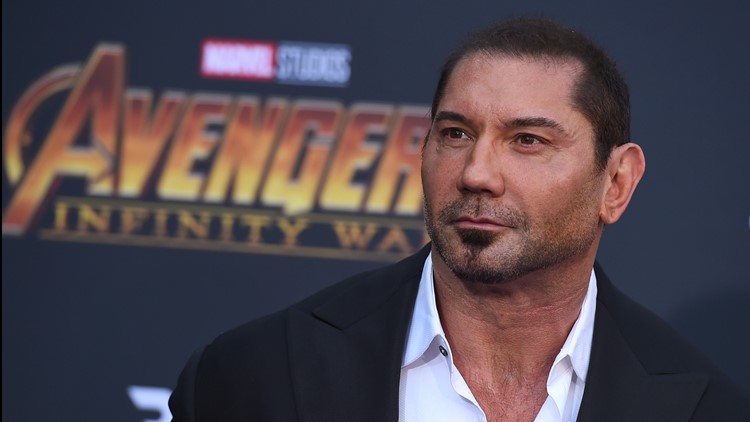 Photo by: Jordan Strauss/Invision/AP
Dave Bautista arrives at the world premiere of "Avengers: Infinity War" on April 23, 2018, in Los Angeles.

TAMPA, Fla. — This year's Gasparilla Pirate Fest will have a grand marshal who is a global superstar and also a local celebrity.

Dave Bautista, of Marvel and WWE fame, will serve as grand marshal along with honorary community hero Lt. Travis Maus of the Tampa Police Department. Both men will head the parade Jan. 25 down Bayshore Boulevard after the pirate krewes invade Tampa Bay.

The parade kicks off at 2 p.m. as Bautista and Maus lead more than 100 parade floats, 50 krewes, five marching bands and hundreds of pirates down the four-and-a-half-mile route.

Bautista starred as Drax the Destroyer in Marvel's "Guardians of the Galaxy" films along with "Avengers: Infinity War" and "Avengers: Endgame." He's currently shooting the second season of the Apple TV series "See" and can also be seen in the film "My Spy" on March 13.

Before becoming an actor, Bautista was a WWE star and is a 2020 WWE Hall of Fame inductee.

Maus has been with the Tampa Police Department for almost 20 years. He was also a member of the U.S. Army Reserve for almost 15 years and is a senior instructor pilot on Blackhawk helicopters.

Maus is a chief warrant officer 4 with Alpha Company, 5-159th. During his latest deployment to Iraq, he was promoted to lieutenant with Tampa police.

“Travis has dedicated himself to the protection of others,” Tampa Police Chief Brian Dugan said. “Whether it is the local community as a member of our Police Department, our nation as a member of the US Army Reserve, or most importantly to him as a husband and father – Travis looks out for others."