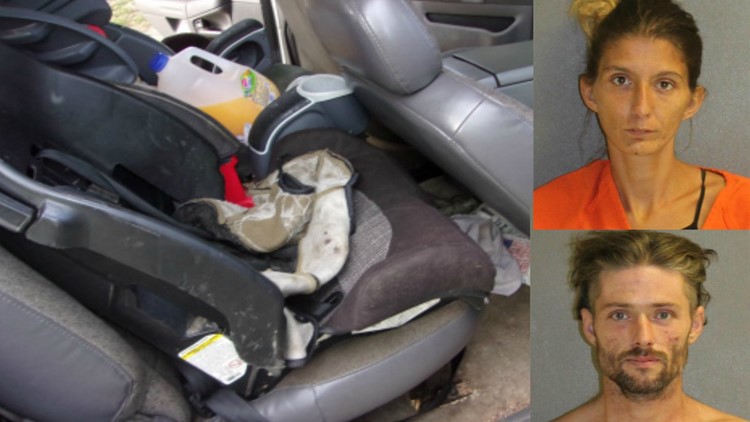 DELAND, Fla. — A toddler was found covered with scabs in a dirty vehicle after officers went to check on two people in the heat, DeLand police said.

Police said David Dexter, 30 and Christian Wilson, 28, were inside a parked vehicle when an officer approached them to see if they needed help in the 104-degree heat.

The officer said while he was talking to the two he saw drug paraphernalia in plain sight.

Police said they started a narcotics investigation and found several needles, a bottle cap with liquid in it and one needle full of liquid.

Dexter told police the substance was Dilaudid and that he and Wilson bought the drugs while the 2-year-old was in the vehicle, law enforcement said.

Police said the toddler was walking around the vehicle wearing a dirty diaper and shirt. Officers said she had scabs on her legs and neck.

Law enforcement said Dexter told them the scab on the 2-year-old’s neck was from her bumping into a lit cigarette.

The vehicle had insects crawling around, dirty diapers, clothes and spoiled food containers in it, police said.

Officers said the toddler was cleared medically by fire rescue officials and a responsible family member took her.