Boat Graveyard: More boats are moving out of the Bay after 10News' investigation

We started asking FWC about these boats back on Oct. 15. 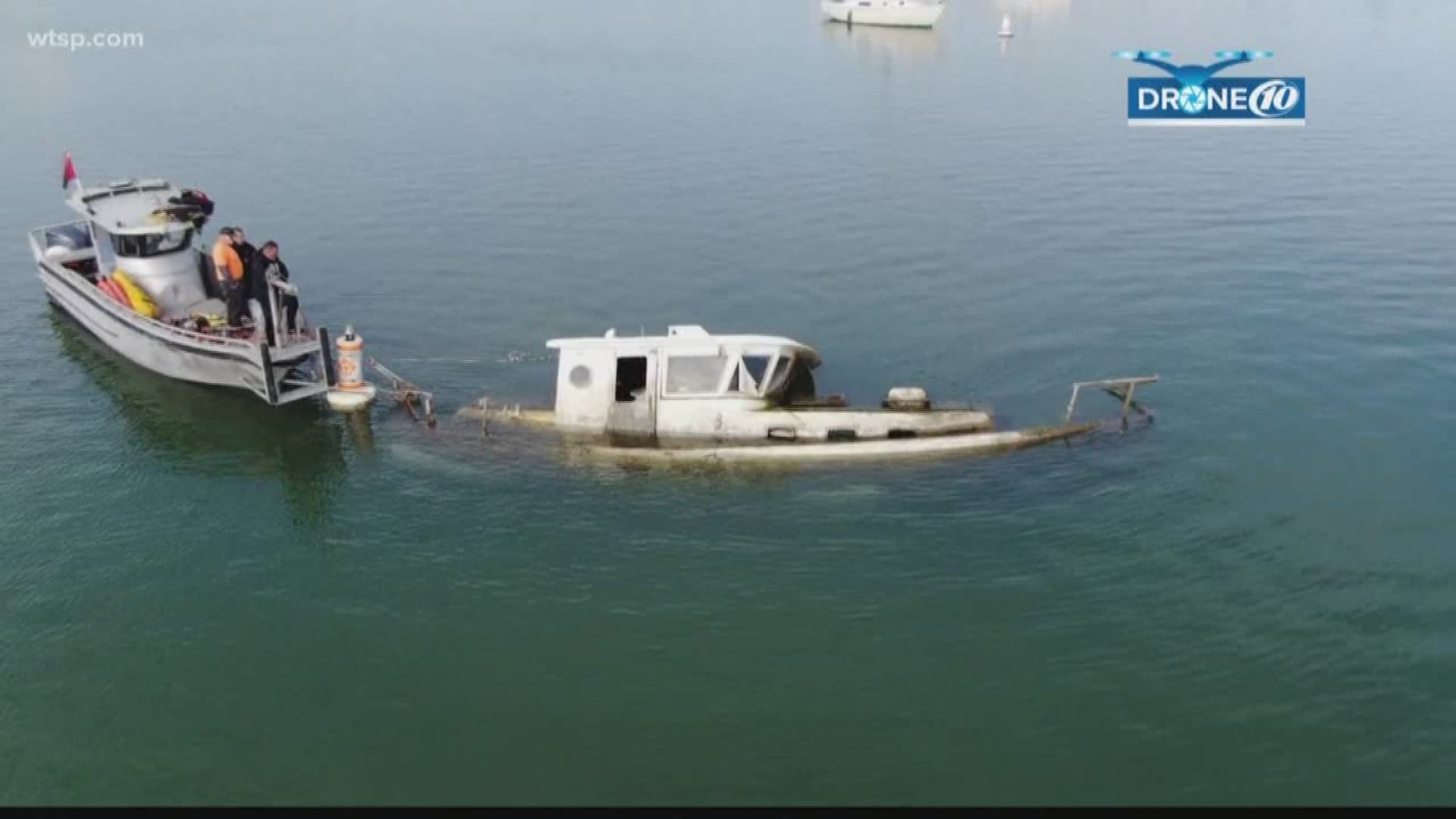 PINELLAS COUNTY, Fla. — Michelle Mayfield walks on the bike path across from Clearwater Aquarium each day. In her eye line is a 40-foot sunken vessel.

It doesn’t fit in with the pristine view of the bay. And when she saw our crew shooting video of that boat and some divers on Dec. 3, she had to ask what was happening.

So-called derelict vessels -- boats that have been left to decay in the water, posing a hazard to people and wildlife -- are a chronic problem all across Tampa Bay. So she was ecstatic to learn that the crew diving beneath the wrecked boat was there to take it away.

The salvage crew was hired by Pinellas County. The county showed us a letter it received on Nov. 20 from the Florida Fish and Wildlife Conservation Commission, authorizing the County to have it removed. The cost is more than $7,000.

The moment the county gets these letters, it acts.

It took TSI Disaster Recovery’s Stephen Lee and his crew three days of back-breaking work to lift the 40-footer to the surface so it could be towed to a staging area for demolition. 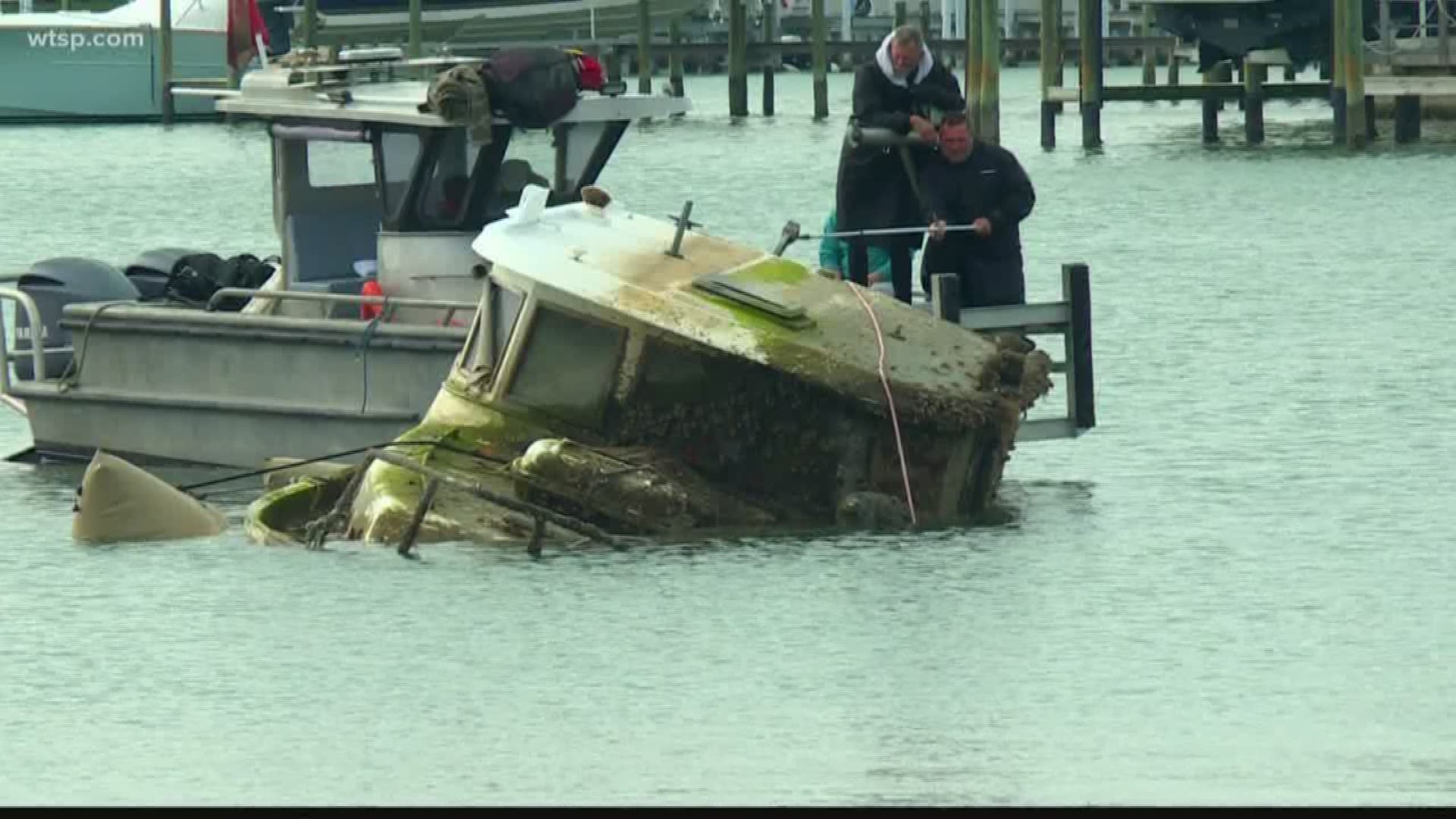 Lee has been busy. He just pulled two other vessels out of the water, in an area beside Gandy Boulevard nicknamed the “Boat Graveyard.” Those boats were featured in our first story on derelict vessels.

We started asking FWC about these boats back on Oct. 15. Since then, the state has issued at least three removal orders, and Lee’s company has already removed all three of these old, junky boats. The other two authorization letters were issued Nov. 7 and 13. Those boats came out on Nov. 25.

It's fast work for boats that sat there for years, just cluttering up the bay. The big 40-footer had a large orange citation sticker on it, dated Oct. 25, 2019.

Batteries, fuel, oil and paint are all removed from these boats during the salvage process, Lee explains. They are dangerous substances, and the boats themselves pose a risk as physical obstacles.

He recently removed a derelict vessel from a jetty after a boat struck it and four people were thrown off.

“We’re seeing them all over Florida,” Lee says. “The sooner we can get them out, the better. They won’t hurt anybody now.”

All three vessels are being demolished Monday, Dec. 9, with our cameras rolling.

FWC tells us there are 16 other vessels being investigated in the so-called “Boat Graveyard.” We have asked for the documents to find out when those investigations began, and what the hold-up, if any, has been, in getting them out.

FWC tells us removing derelict vessels is a lengthy process, which can take anywhere from six to 12 months. The state is required to contact the owners, who have the right to contest charges for having a derelict vessel. Sometimes the owners will fight the state in court, officers tell us.

Many of these boats have been there for years, according to witnesses, and meet the legal standard for removal.

Since our first story on the "Boat Graveyard" aired, many viewers have called us to report other clusters of old boats. If you live, work, or play around abandoned boats, we want to hear from you. We have also spoken with people who have boats they want to remove, who have faced challenges. We are working with them, to bring their stories -- and some solutions -- to the surface.

RELATED: The 'boat graveyard': Why are there more than a dozen old, sunken boats sitting in Tampa Bay?

If you'd like to speak with us, email KMccall@wtsp.com.