No Florida judges were voted out of office, once again

One Florida Supreme Court Justice and 23 appellate court judges were on Florida ballots. Voters chose to keep every single one. 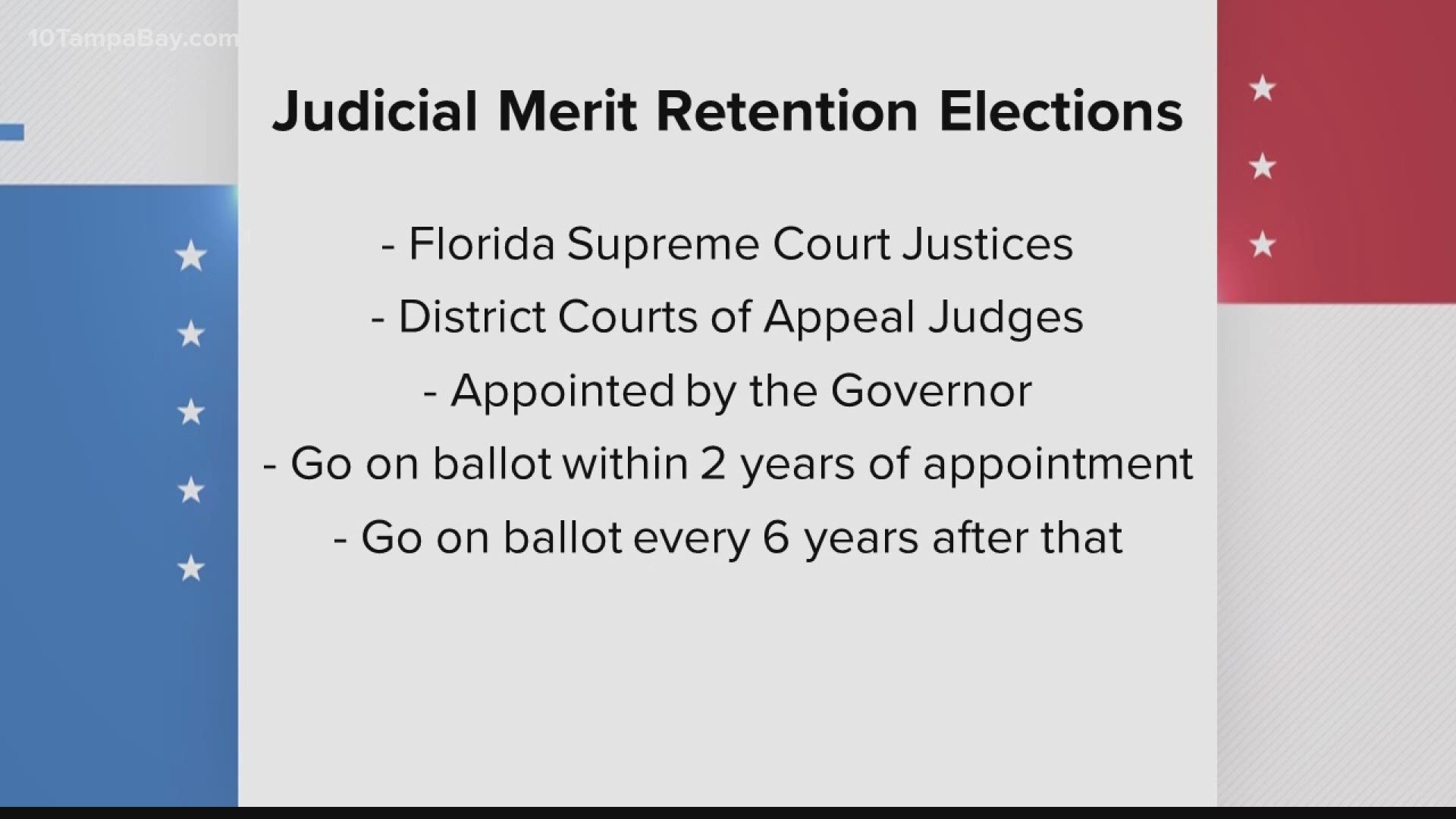 ST. PETERSBURG, Fla — With all the talk of election results this week, there’s something on your ballot that’s not getting a lot of attention: Once again, no Florida judges got voted out of office.

“People don’t pay as much attention to judicial elections, particularly retention elections, as they do to things that are obviously more exciting, like congressional races or the presidential election,” said Orlando attorney Trey Smith.

You may remember seeing a few questions on your ballot asking if certain judges should remain in office.

“The judicial elections give us – give the people an opportunity to weigh in on our judicial selections. And we know that the judicial branch is the one that’s most removed from the people, the least Democratic of all the branches,” said Stetson University Assistant Professor of Political Science Kelly Smith, PhD.

That’s because Florida Supreme Court justices and District Courts of Appeal judges are appointed by the governor.

Those newly-appointed judges go on the ballot within two years of their appointment so voters can choose whether they stay in office.

If that happens, they go on the ballot every six years after that.

There are no term limits, but Florida judges can’t serve past the age of 75.

“In Florida, we did not set up a system for lifetime tenure for judges. We wanted the people to have regular input. The problem is, you need the input from the people. And that input isn’t coming. It’s not effective. It’s not substantive,” said Trey Smith.

Florida Supreme Court justices and judges on the five District Courts of Appeal review the decisions made by county and circuit trial courts.

In the 2020 general election, one Florida Supreme Court Justice and 23 appellate court judges were on Florida ballots.

Voters chose to keep every single one.

Before Election Day, Trey Smith posted on social media, encouraging people to vote “no” on a particular judge.

“The hope was to spark a discussion and get people to pay attention to – this is the third branch of government. It’s incredibly important. And your personal life is more likely to be more directly affected by what a judge does, more so than what a member of Congress does or what the president does,” he said.

But the Florida Bar tells 10 Investigates voters have chosen to retain every justice and appellate judge that’s ever appeared on their ballots.

None have ever been voted out since these Florida judicial retention elections began in 1978.

“Even if we are retaining our judges at a 100 percent rate, at least this is an avenue that’s available for the people to hold our judges accountable and hold those who appointed them accountable, to make sure that they’re doing a good job,” said Kelly Smith.

So, what’s the deal? Do Floridians just think all these judges and justices are doing a great job?

“That’s what we would hope. I also think that they’re really difficult to get information on. It’s really a struggle for residents to know a lot about their decisions and how their decisions affect them,” said Kelly Smith.

Judges and justices can’t talk about issues that might come before them in court, but you can do your own research by reading their opinions on cases they’ve decided. Those can be found here for Supreme Court justices. You can find District Courts of Appeal opinions by navigating to your district’s website.

The Florida Bar posts biographies on its website for every justice and judge up for a merit retention election every two years.

The Florida Bar also provides the results of its merit retention poll, which asks in-state Florida Bar members to rate judges and justices who are up for retention votes.

“In my preparation for this past election…I was pretty easily able to find who appointed them, which obviously gives you some indication of whether they lean more conservative or liberal,” said Smith. “They’re nonpartisan races, but they are appointed by partisan officials. So, it’s more likely that Republican elected officials are going to appoint more conservative justices vs. more liberal justices.

There is another way for judges who behave unethically to be removed from office, and this has happened before.

The Florida Constitution gives an independent agency called the Judicial Qualifications Commission the power to remove a state judge after investigating misconduct.