Turn To 10: Customers paid thousands to a local contractor. They say they couldn't get ahold of him.

Since our story, the man has been arrested. 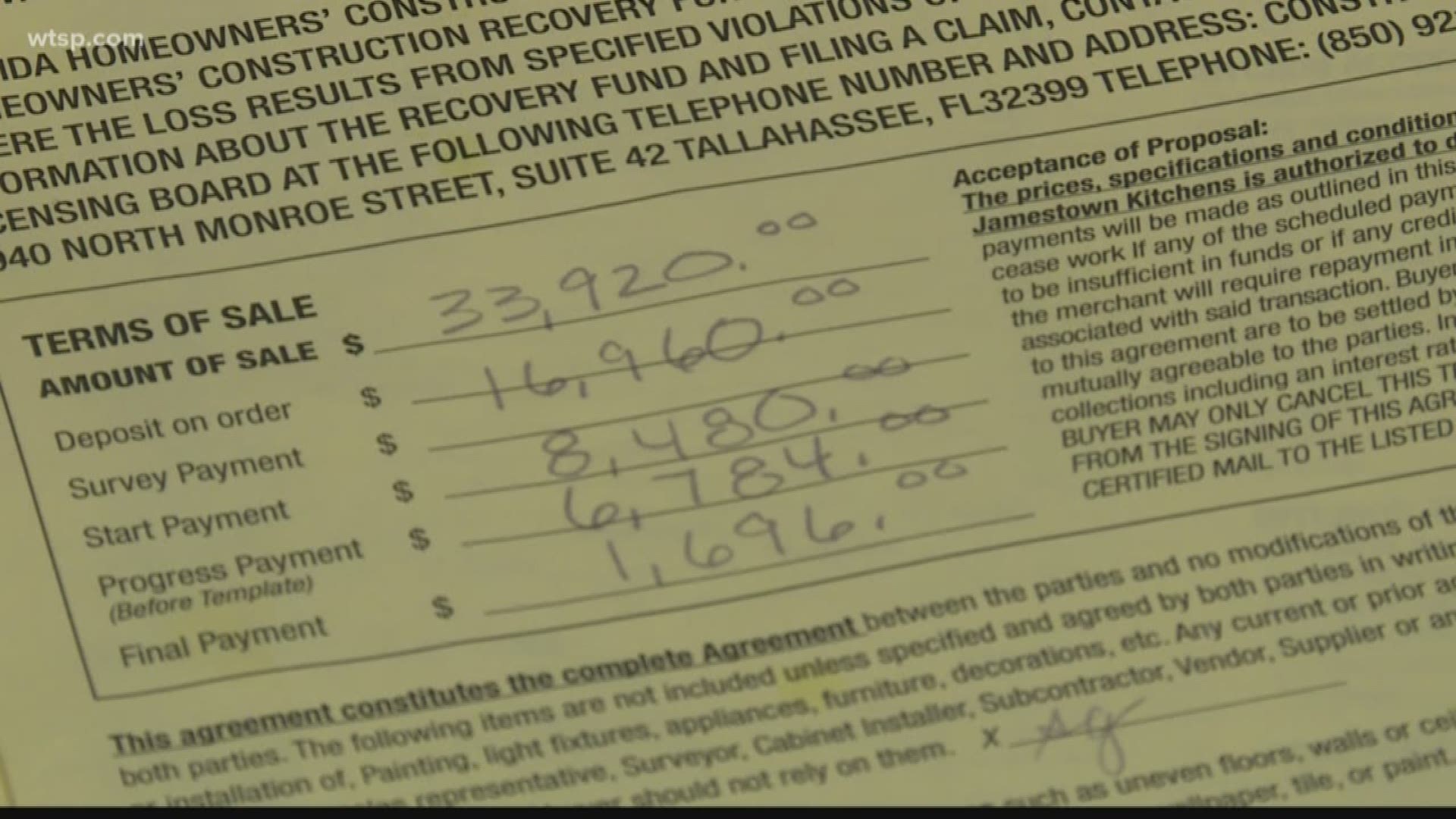 SARASOTA, Fla. — UPDATE: The subject of a 10Investigates Turn To 10 story has been arrested and charged for defrauding clients.

10Investigates spoke with several customers of James Gerard, the owner of Jamestown Kitchens, who paid for the business to do work on their homes. Those customers tell 10Investigates their projects were never completed after they paid Gerard.

The Sarasota County Sheriff’s Office arrested Gerard for defrauding clients out of more than $230,000 after Gerard allegedly didn’t return a rental van to Home Depot; and the card he used to rent it was declined.

Local families say they thought they were getting major upgrades inside their homes.

Instead, they say they are out thousands of dollars with nothing to show for it. Some families paid upwards of more than $60,000. They wanted new kitchens, new bathrooms.

“We were very excited about it,” Sandy Garcia said.

Gary Garcia and his wife, Sandy, were one of those families.

“Our family was coming down for Christmas and we were really excited about the whole thing and they were leaving and then we were going to have this bathroom remodeled, two bathrooms remodeled,” Sandy Garcia said.

The Garcia’s say they signed a contract with Jamestown Kitchens, a business located off of 301 in Sarasota, back in October.

They contacted 10Investigates after hearing nothing from the contractor weeks after they paid him thousands.

“The total of that would have been $35,000. We were expecting that they were going to apply for a permit. We were told by them that it would take 10 weeks to get the permit and that they would start the work in January and be done by the end of January,” Gary Garcia said. “We paid them half the amount for the project. I wrote a check for $16,960 and have not heard from them since.”

David Zandi says his interactions with Jamestown Kitchens began in the spring of 2019. They hired the company to remodel his kitchen.

“We wanted to have a major kitchen remodeling project and we went to the internet to find businesses that did it and Jamestown Kitchens had lots of good reviews,” David Zandi said. “We have paid him almost $69,000 now.”

Zandi says at first, things went OK. The company did install the cabinets but when it came time for the top of the line countertops to be installed, he got the news that he wasn’t expecting.

“I called to see if everything was good to go, and they said no we hadn’t made it and we are not going to make it,” Zandi said.

Zandi says the money he paid Jamestown for the Perla Venata countertop never made it to the fabricator.

“He (fabricator) actually still has our slabs that I’m not actually sure what he’s going to do with,” Zandi said.

And then there’s Michael Garfin. He wanted new cabinets in his kitchen. He signed his contract with the contractor in November.

After he paid the money, though, he hasn’t heard anything since.

10Investigates stopped by the business to try and talk to the owner but the doors we locked. The lights inside were off. On the door of the business, someone taped a white piece of paper onto it with a warning to customers to stay away. The note also said that the company has an "F" rating on the Better Business Bureau.

According to the BBB’s website, they also flag a pattern of complaints.

All of the families filed complaints with the local sheriff’s offices, hoping if they can’t get a hold of the owner, then deputies can.

“We have no bathrooms, no money. The money sadly came from, my parents died recently. It came from a life insurance policy, so it wasn’t like we had this extra money before. It was earmarked for the bathrooms and now, it’s gone,” Sandy Garcia said.

The Sarasota County Sheriff’s Office sent a release out Monday morning regarding Jamestown Kitchens. It states:

The Sarasota County Sheriff’s Office is seeking information related to Jamestown Kitchens, a cabinet manufacturer, distributor, builder, and installer, whose office is located at 4050 N. Washington Blvd., in Sarasota.

Over the past few weeks, the sheriff’s office has received several reports from citizens reporting they paid money to the company however, the work was never completed.

If you have any information related to Jamestown Kitchens, please contact our Criminal Investigations Section at 941.861.4900.

What can you do to protect yourself in a situation like this? Unfortunately, not much.

The Better Business Bureau says they are seeing more and more cases like this, businesses with once-great recommendations go downhill and downhill quick.

If you are going to hire a contractor: 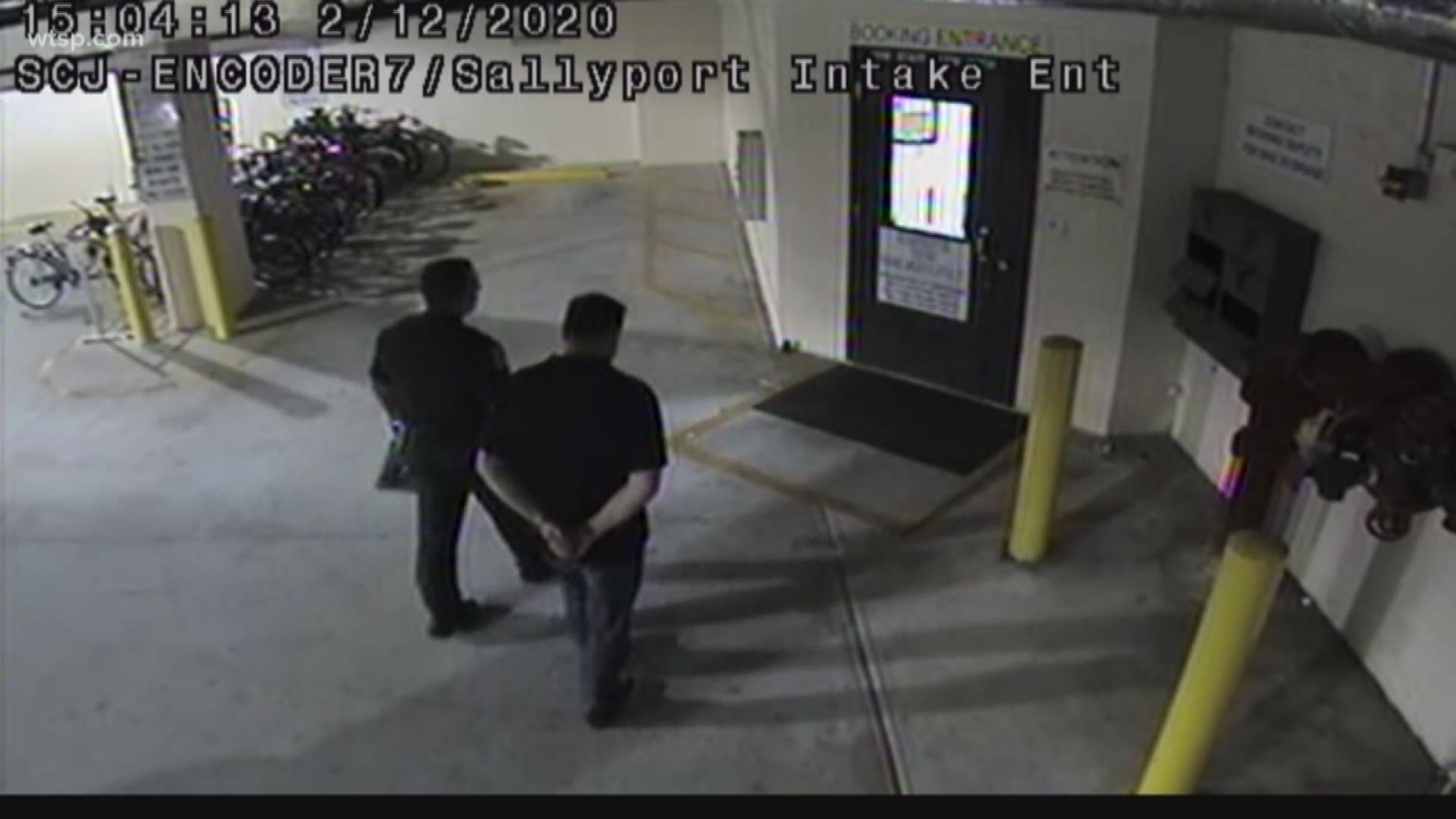 RELATED: Amazon shopper gets $1,295 refund after Turn To 10 gets involved