10Investigates continues to expose SunPass problems the state has tried to keep quiet. 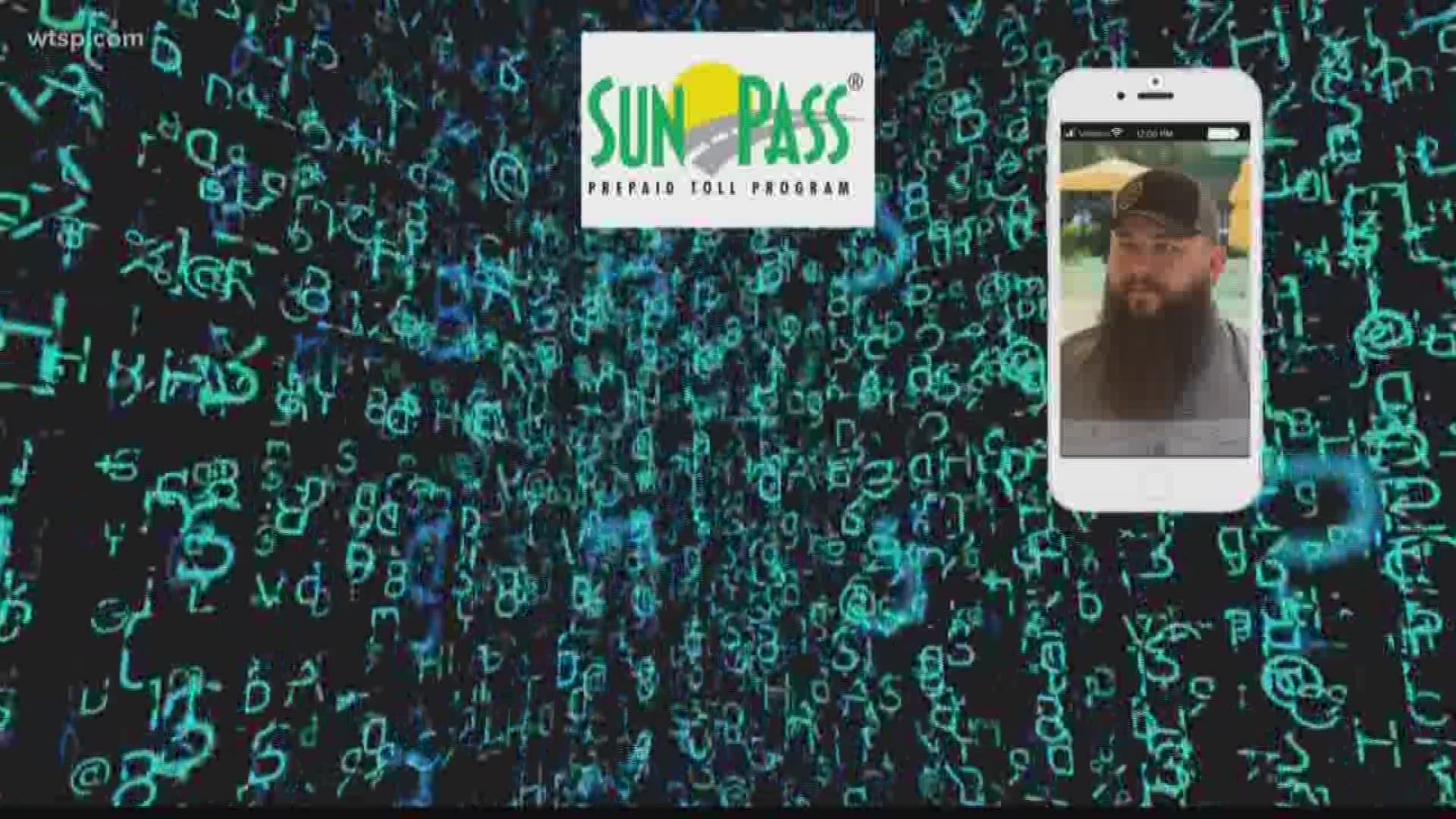 TAMPA BAY, Florida – 10Investigates has learned the personal data of some SunPass customers was compromised, but the Florida Department of Transportation (FDOT) never made the problems public. And, the agency has not provided any evidence as to how widespread the problem was.

It’s the latest discovery from 10Investigates, which has spent the better part of the 81-day disruption uncovering issues related to the botched SunPass system upgrade -- and the state’s repeated attempt to downplay the problems.

FDOT initially said the SunPass system overhaul would take just six days and be completed by June 11. But, the problems continue well into a third month.

“I panicked,” said the viewer, who asked not to be identified due to his history in law enforcement. “I have a family [and] now another unknown party has my address, my phone, my email address [and] my security questions.”

It’s unknown exactly how long the information was exposed, but the viewer said it took SunPass five days to acknowledge the security failure after he reported it to customer service on July 12 – more than five weeks after FDOT and its contractors flipped the switch on the new system.

“Someone else had full access to my identity and [FDOT] left it up to me to fix,” the viewer said. “I couldn’t be more dissatisfied by just their total lack of concern at how many other people don’t know they’ve been compromised.”

An FDOT spokesperson says only 38 customers – out of more than six million – were affected, but has not returned any requested documents that could verify that claim.

UPDATE: Only after this report was posted Monday afternoon, FDOT provided a series of emails between July 18 and July 30 where state employees and contractor Conduent try and sort out what to do about the problems caused by "defective software."

On July 30, Conduent indicated it handled the problems itself, and assured state employees only 15 accounts were "potentially compromised." It does not appear any further investigation was done.

No notice about the compromised data ever went out to SunPass customers or state media outlets, other than notification to 15 individuals. Several key lawmakers involved in transportation told 10Investigates Monday they had not heard of the issue either.

The viewer who contacted 10Investigates said his only notification from the state was a pair of voicemails that informed him someone “may” have accessed his account and he “may” want to change his username or password.

FDOT only admitted the problems to 10Investigates after weeks of questions and an initial FDOT denial that any data breach occurred. Whether the compromised personal data qualifies as a “data breach” is open to interpretation.

However, according to FSS 501.171, a data breach can also include “username or e-mail address, in combination with a password or security question and answer that would permit access to an online account.” The viewer who contacted 10Investigates said he was inadvertently given enough access to a stranger’s account to change her login email and security questions.

State law requires government agencies to file reports of any data breach within 30 days, and alert affected individuals in writing “as expeditiously as practicable.” It does not appear the state alerted the affected SunPass customers in writing.

There is a clause in the statute that allows an agency to forgo noticing affected customers if, “after an appropriate investigation and consultation with relevant federal, state, or local law enforcement agencies, the covered entity reasonably determines that the breach has not and will not likely result in identity theft or any other financial harm to the individuals whose personal information has been accessed.”

Requests for FDOT records on the problems have not yet been returned from a week ago.

UPDATE: After this story was posted Monday afternoon, FDOT provided a statement to 10Investigates indicating "Conduent immediately resolved the issue" and notified the state of the issues on July 25, 2018.

However, that was 13 days after the problem was reported by the 10News viewer to customer service. FDOT says only 38 accounts were vulnerable and only 15 were accessed; Conduent notified those 15 customers in July.

Following the publishing of this report, FDOT says it will "be giving written notice to the 15 customers with ways to minimize or eliminate any potential harm. The Department will be ensuring these customers are not harmed by Conduent’s performance."

FDOT knew of risks ahead of time

“This is concerning and could potentially put our customer’s (sic) data at risk,” Freddy Guidotti wrote in a May 31 email after he was alerted a SunPass test site was available on the unsecured internet.

“We need to discuss this ASAP!,” he wrote in another May 31 email to Florida Turnpike Enterprise Director of Toll Systems Buzz Holland.

But FDOT and its contractors went ahead with the transition on June 6 anyway, setting off a chain reaction that continues to disrupt hundreds of thousands of customers’ accounts nearly three months later.

10Investigates obtained the emails through public records requests, but FDOT has not yet responded to additional requests for more information.

It's still unclear how long or how many SunPass accounts were left exposed by FDOT and Conduent.

So Sri Sridharan, Managing Director & Chief Operating Officer for the Florida Center for Cybersecurity at USF, suggests all customers log in to their SunPass.com accounts to change their passwords. He says it's good regular cyber-hygiene for any online account.

Given SunPass’ data migration and security problems, he also suggests verifying your personal information and toll transactions are all correct as well.

Dozens of customers each week are telling 10Investigates they are discovering what appear to be billing errors on their accounts, creating massive hold times in the one-to-two-hour range on the customer care lines.

FDOT response to other problems

Below is a running report card of SunPass issues 10Investigates has been covering:

Response: In the two months since 10Investigates' first report on the failures, FDOT has not gotten much more forthcoming with information. The agency refuses to acknowledge interview requests and has even sent simple records via U.S. mail, seemingly to try and delay their release. The public still has no explanation -- outside of 10Investigates' reporting -- of how 6 million customers were inconvenienced so badly.

Response: FDOT, its partners, and its vendors have been working around-the-clock to fix the computer issues, and they have announced there will be no fines or penalties on customers during the ongoing disruption. The toll backlog was finally cleared Tuesday for many SunPass users, but EPass and toll-by-plate customers are likely still seeing long delays in billing. The state has rolled out its plan to reimburse customers for bank overdraft fees. But account errors -- of which there are multiple indications there are plenty -- are the responsibility of the customer to identify and report before refunds are issued.

Concern: Some customers have to wait more than two hours to speak to representatives, and their emails to SunPass go days without a response.

Response: An FDOT spokesperson says extra staff members have been dedicated to customer service but has been unable to provide specifics over the course of the last two months. In July, an agency spokesperson touted website improvements and Conduent's reduction of call center wait times; but in August, the website continued to crash and call center wait times exploded as more drivers discovered unexpected and some inexplicable charges on their accounts.

Concern: It appears the state has been unable to match all of the transactions to vehicle owners, delaying the posting of some charges. Viewers are also reporting errors in plate identification, landing other drivers' tolls on their accounts.

Response: An FDOT spokesperson says no tolls will be waived and invoices will go out "once quality assurance processes are completed."