The call comes after three recent reports of unprovoked use of force by the Tampa Police Department, according to the leaders. 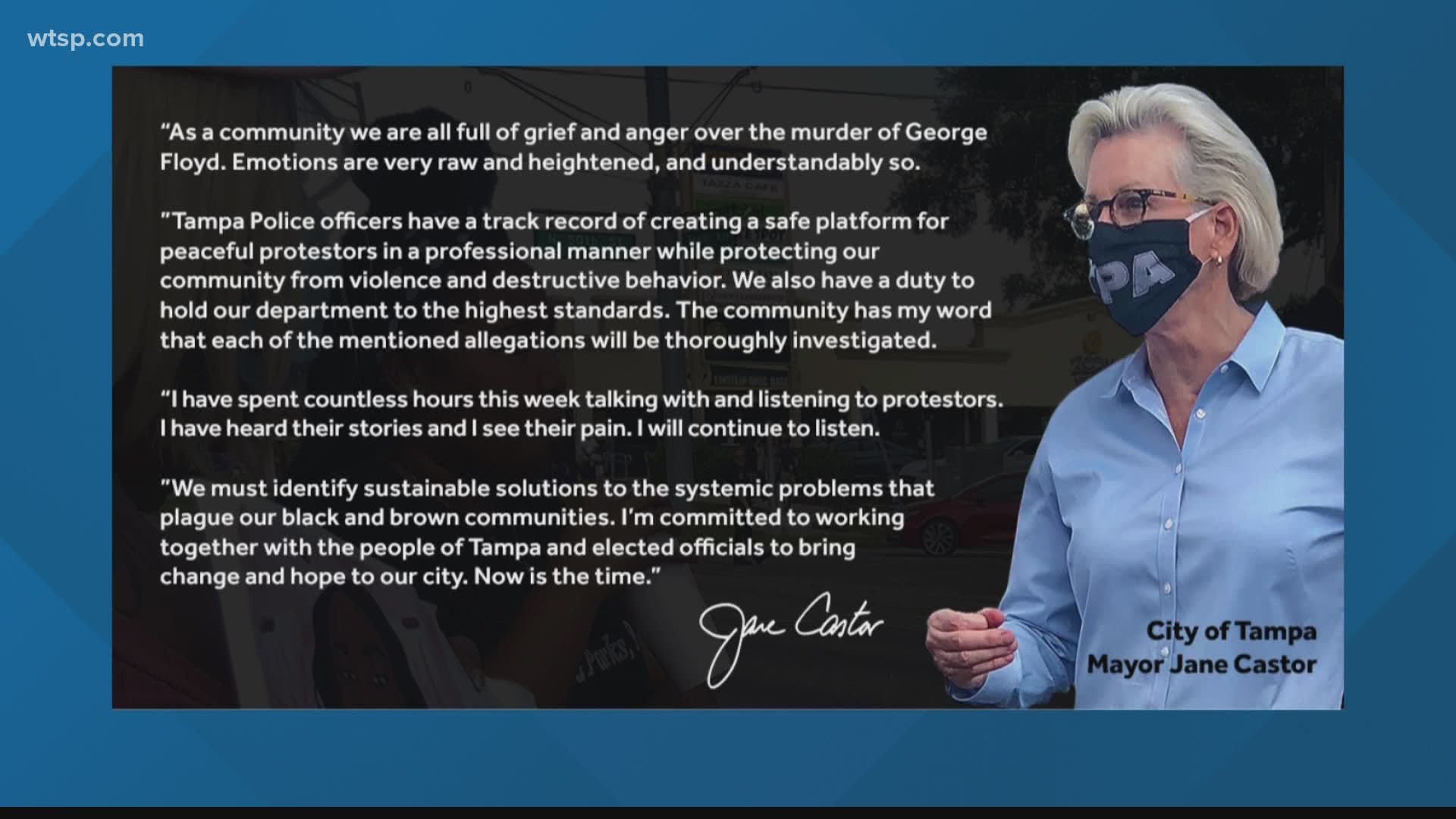 The call comes after three recent reports of unprovoked use of force by the Tampa Police Department, according to the leaders.

" Let us be clear: we strongly condemn the use of force of violence by law enforcement against any protestor who peacefully exercises their rights to the freedom of assembly and expression," leaders wrote." We also condemn the use of force or violence by law enforcement against unarmed individuals whose only crime appears to be living while black."

But, Dugan counters the leaders' account of events on May 30 and June 2 saying the police department has never deployed tear gas or rubber bullets.

"For the past 6 days, Tampa Police officers have worked tirelessly to provide an environment for our community members to have their voices heard. During that time, we also witnessed these peaceful protests become hijacked by people who are not here to honor the memory of George Floyd but instead cause chaos in the city.

"Let us be clear, we have never deployed tear gas or rubber bullets. We will continue to work with peaceful demonstrators to make sure their rights are respected, as we have done in years past.

"Throwing rocks, water bottles, mortars and weapons at our officers is not peaceful and endangers not only their lives but also the innocent people around them," Dugan wrote in a statement to 10 Tampa Bay.

Tampa Mayor Jane Castor also responded to the claims saying that emotions are understandably very raw over the "murder of George Floyd." Sharing that she is listening to protestors in search of identifying sustainable solutions to the systemic problems plaguing people of color.

Castor also gave the community her word, saying the allegations by local leaders will be thoroughly investigated.

"Tampa Police officers have a track record of creating a safe platform for peaceful protestors [sic] in a professional manner while protecting our community from violence and destructive behavior. We also have a duty to hold our department to the highest standards. The community has my word that each of the mentioned allegations will be thoroughly investigated."

You can read her full statement below:

In addition to denouncing the actions of police, the leaders are asking for an account of the officer's actions, a report on any corrective action taken, an explanation, and for those involved in the reported TGH incident to be relieved of duty until a conduct investigation is completed.

"It is time for a new era of common-sense reforms to ensure greater transparency in policing and stronger limits on the use of force," leaders wrote.

10 Tampa Bay has reached out to TGH for comment.

RELATED: A tale of two Tampa Bays: Examining the rage behind the riots