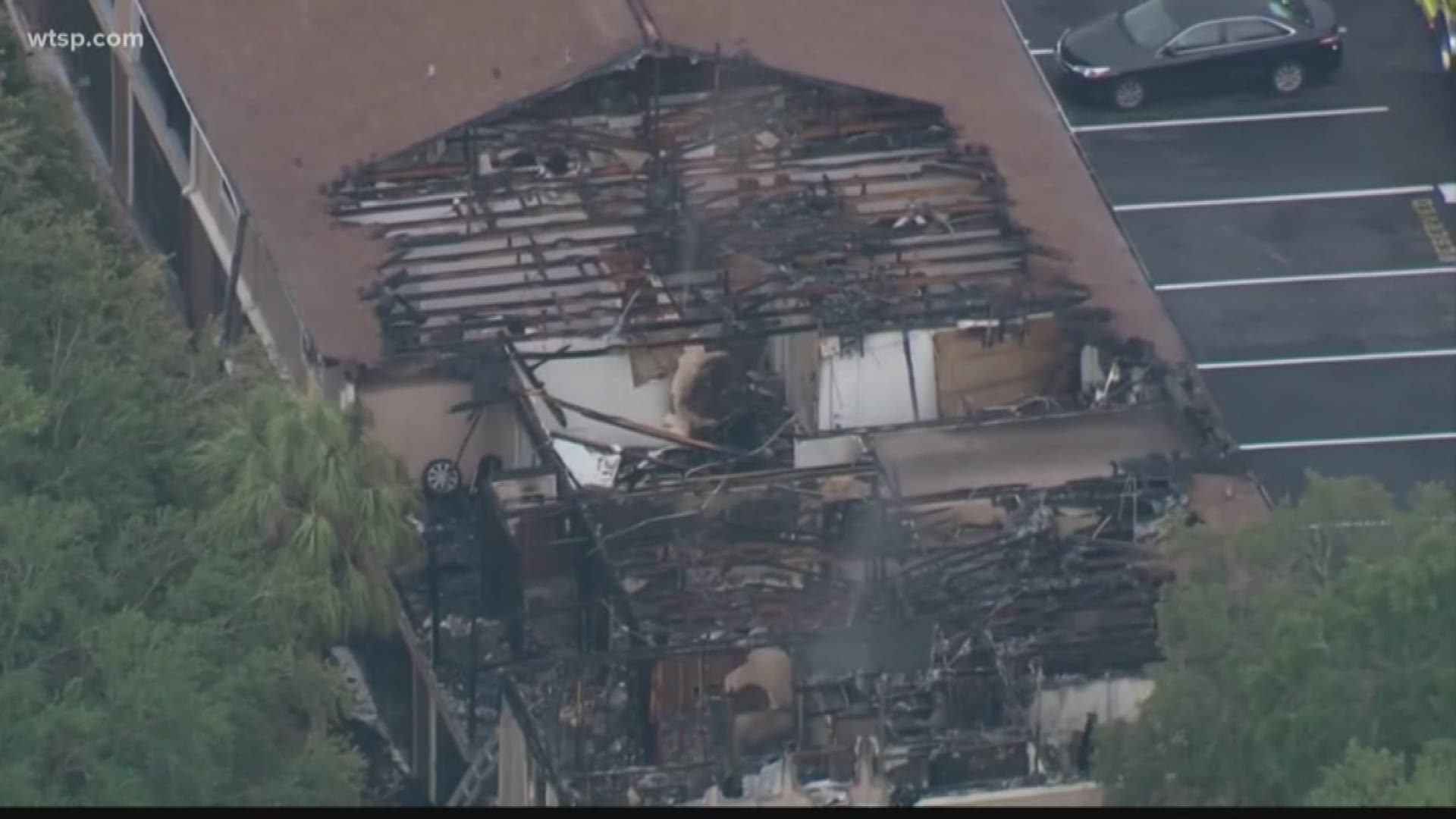 “I just saw a huge blaze - fire on top of the building. I think it was at least about 20 feet up in the air. It was a huge fire,” said neighbor Yardley Echavarria. “And I just saw it traveling down the building traveling towards our apartment.”

"She [the mother] realized that her two children were not outside and she went inside to rescue the 10-year-old and the 5-year-old child, and unfortunately, all three of them perished in this fire, tragically," Chronister said at a news conference.

Chronister did not identify the three people killed in the fire because the family has not yet been notified.

"The mother and her two children are the only ones who have lost their lives in this fire," Chronister said.

Deputies, who were first to arrive at the scene started pulling people out of their apartments, going door to door.

They say the fire alarms and smoke detectors were going off, so those seemed to be functioning.

Chronister praised the mother who escaped but went back inside the apartment to try to rescue her children.

"I don't even know how to comment," Chronister said. "For a mother's love to go back in and know that my children may be inside, not knowing that they were inside, but they may be inside and she lost her life because of it. I mean, is there any greater actions of love than the one displayed by this mother today?

At least eight apartments burned at the complex and 12 people were displaced, according to Hillsborough County Fire Rescue. The Red Cross is helping them find shelter.

The fire started in a second-floor apartment and spread quickly through a shared attic, a Hillsborough County Fire Rescue spokesperson said.

It took crews about 45 minutes to control the fire.

“I ran upstairs to open the door to call for her. And I was screaming for her. Screaming for her,” said Carmela Ortiz, a roommate of the mother killed. “And she wasn’t answering me.”

At that moment, according to Ortiz, the mother ran back inside the unit.

Sadly, she nor her children never made it out.

“I was just screaming, because I know she didn’t come out behind me," Ortiz said. "And the fire department came. I immediately grabbed them and said there’s two kids up there. And my roommate. You have to go."

“From what I could see, she was a sweet girl and her kids were very loving,” said neighbor, Louis Corretjer. “My heart goes out to her and her family.”

This is the third major fire at this same apartment complex within the last 3 1/2 years.

About a dozen units were destroyed in 2015. Another fire in 2018 damaged several more units.

In those previous fires, there was a loss of property. Tragically, this time there has also been a loss of life.

“If she could’ve gotten them out, I know she would have. There had to have been something stopping her,” said Ortiz. “Like every mom, you want what is best for your kids."

10Investigates has confirmed since 2008 there were 29 complaints filed against Captiva Club Apartments. Most of those were regarding termites and plumbing issues. However, there are two violations for bathroom outlets not being grounded or wired properly. One violation is dated June 2018 and the other is from October 2016.

Captiva Club Apartments provided the following statement Thursday, a day after the fire:

“As of this statement, the Fire Marshal’s office has not released a report on the cause of the fire and the investigation is still ongoing. We have asked the authorities for the expected delivery date of the report, but have not received any official notice as to when the report might be released.

In the meantime, our top priority has been to support the residents impacted by the fire. Our management team has worked to contact all of the residents whose apartments were damaged and has offered them temporary accommodations at other apartment units within the property.  A few residents have opted to utilize the available apartments, and others have sought accommodations elsewhere.

There has been a tremendous outpouring of support from the community and neighboring residents.  Our team has set up a Donation Center in the Leasing Office to collect items such as clothing, non-perishable foods and other household items for affected residents, and the Tampa chapter of the Red Cross is also accepting donations.

This has been a challenging time for everyone, and our team is working around the clock to ensure the safety and comfort of its residents. We will provide more information as it becomes available."

We are deeply saddened by the tragic event that occurred early this morning at Captiva Club Apartments. Our thoughts and prayers are with the family of the victims.

At this time, the Hillsborough Fire Department has not yet determined the cause of the fire, but we are working closely with the authorities to ensure a complete and thorough investigation of the incident.

In the meantime, the safety and security of our residents remains our top priority. Our property management team is working diligently to ensure safety in the rest of the property and relocate residents whose apartments were damaged, or deemed unlivable, as a result of the fire to other vacant units. In all, there were eight total units affected by the fire out of 345 total units within the complex. All further inquiries should be directed to the local authorities at this time.