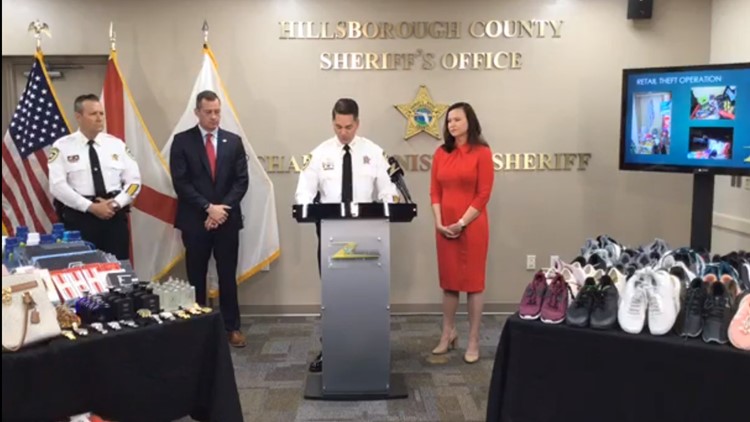 More than $100K in goods recovered, multiple arrests made in retail theft case

TAMPA, Fla. — Two organized, retail theft ring investigations led to the recovery of more than $100,000 worth of stolen merchandise and several arrests, the Hillsborough County Sheriff's Office announced at a press conference on Tuesday.

The first investigation got underway in June after deputies developed enough evidence to conduct a search warrant at a home off Emma Street East in Tampa.

After interviewing them, deputies said they learned that 39-year-old Lee York was the leader of the crime ring. York has 21 previous felony convictions, according to the sheriff's office.

RELATED: 'She could have caused catastrophic damage': Woman accused of making dozens of pipe bombs

York is now facing charges of child neglect, maintaining a dwelling for drug use, racketeering, and conspiracy to commit racketeering.

Through law enforcement's investigation, another woman who was connected to York was also arrested, the sheriff's office added.

Eventually, deputies said they were able to connect these people to 26 cases of theft.

The second, unrelated investigation developed in July after investigators learned of a Cuban theft organization from the Polk County Sheriff's Office and the Florida Department of Law Enforcement.

Investigators learned a home off of West Crest Avenue in Tampa was being used to store and distribute stolen merchandise, according to the sheriff's office.

A special task force then used "confidential sources" to go to the home to either buy or sell stolen goods. The ring-leader of the organization, identified by deputies as Jose Valdivia-Quinones, instructed the task force's source to steal goods from specific stores in return for compensation.

Law enforcement was then able to arrest Valdivia-Quinones, who is accused of "feeding people" crack cocaine for payment.

During the investigation, more than 1,100 pairs of shoes, more than 500 bottles of cologne, personal grooming supplies, purses, clothes, and high-end watches were recovered.

The approximate value of all the merchandise totaled $180,000, the sheriff's office said.

Florida's Attorney General, Ashley Moody, was at the press conference with the sheriff's office and said those involved in these racketeering cases will be held to the "fullest extent of the law."

She also touted law enforcement's efforts in going after these criminal organizations, saying multiple businesses across 14 Florida counties were victimized.

She added that these businesses were getting hit eight to 10 times a day.