The "controlled fashion" of draining the site is going well, a Manatee County official said. There remain concerns about a bigger disaster. 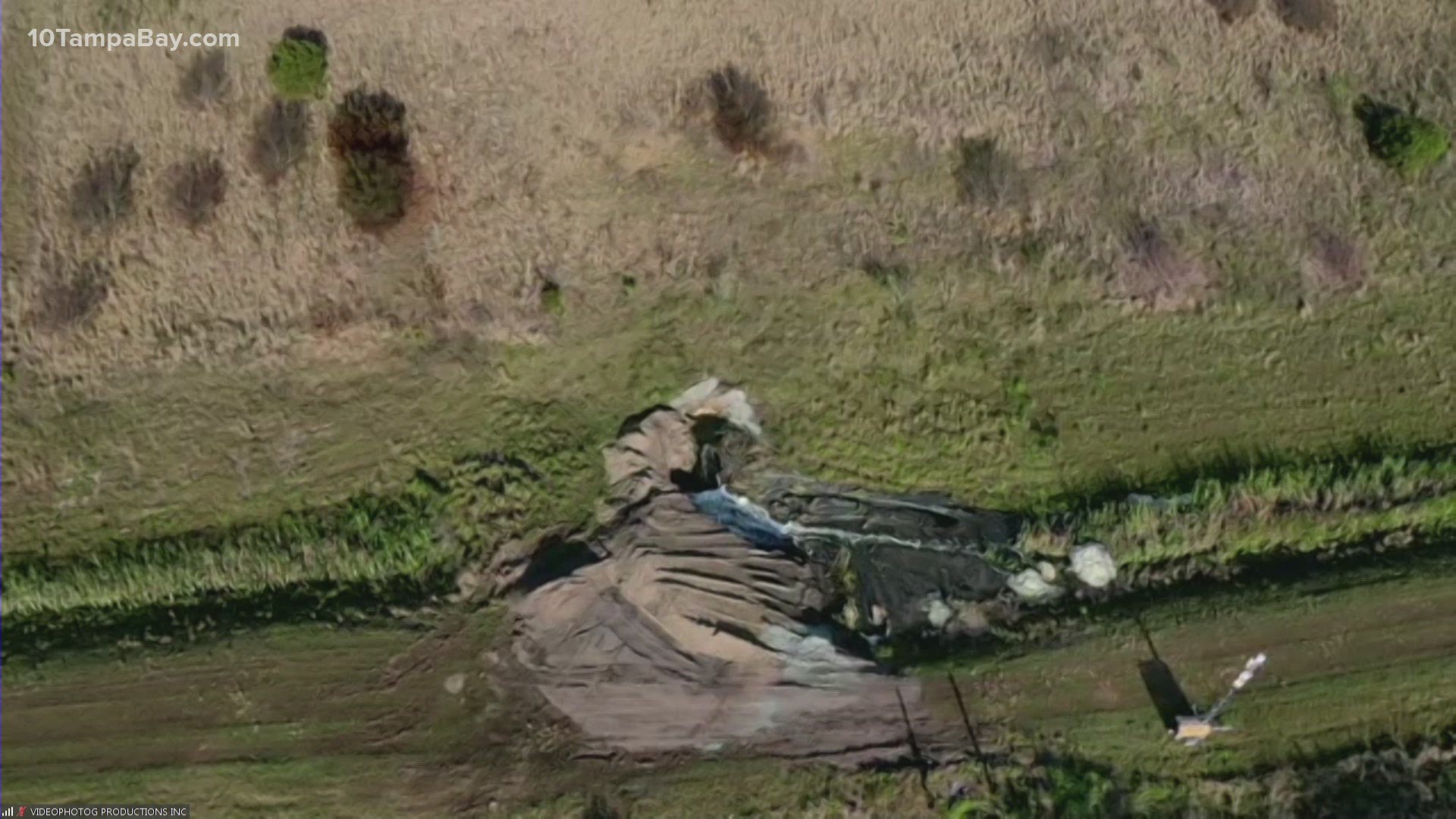 PALMETTO, Fla. — Overnight attempts to fix the leak at the former Piney Point phosphate processing plant were unsuccessful, local leaders acknowledged Saturday afternoon, as efforts have been ongoing to prevent a much bigger flood of wastewater.

Crews used heavy equipment to pile earth material and rock in an attempt to "kind of plug the hole in the dam" on a large section of the breach but were unsuccessful due to the amount of pressure pressed upon it, said Manatee County acting county administrator Dr. Scott Hopes.

"When they reached a point where they were about to celebrate, and then it blew threw," Scott said.

Some 800 million gallons of process water, saltwater from the Port Manatee dredge project, rainfall and stormwater runoff are kept on the site in a few retention ponds located at the corner of U.S. Highway 41 and Buckeye Road. It's owned by HRK Holdings, and Florida’s Department of Environmental protection has oversight.

Waste material is stored in water-covered phosphogypsum stacks on the property, and Piney Point’s ponds had already been approaching their maximum capacity – an issue made worse by rainfall.

The leak first was detected earlier this week and, since then, there have been efforts to move 22,000 gallons a minute out of the main retention pond and into a drainage ditch at nearby Port Manatee to relieve some of the stress on the breaches -- several small ones and a "significant leak" at the bottom of the larger retention pond.

Hope said it'll still take 10-12 days to deplete the amount that's there -- about 380 million gallons, according to the county. The water eventually flows into Tampa Bay, prompting worries about its potential impact on marine life and even red tide.

As part of Florida Gov. Ron DeSantis' state of emergency declaration, Hopes said the state will be moving more pumps and other equipment to the site.

There remain concerns of a complete collapse, however. People who live in the area have been told to leave and others to stay away. Manatee County Commission Chair Vanessa Baugh said she's been notified by the sheriff's office that the area has largely been cleared out.

RELATED: US 41 shut down near Piney Point leak over 'imminent' threat wastewater could gush from collapse

A full breach or collapse, Hopes said, would happen in just a short amount of time.

"We're talking about the potential of 600 million gallons within the matter of seconds and minutes leaving that retention pool and going around the surrounding area," Hopes said. "Fortunately, the population density is relatively low -- extremely low -- there's a lot of agricultural area, and there are some residual borrow pits that still have the capacity to absorb the bulk of that."

The "controlled fashion" of the leak is going well -- the risk is the uncontrolled release, Hopes added.

The Borden Chemical Company first built the now-closed phosphate processing plant in 1966. It was later owned by Royster Phosphates, Inc., then purchased by the Mulberry Corporation in the 90s.

It was abandoned in 2001 when Mulberry declared bankruptcy before owned by HRK Holdings.

For the past 20 years, however, there have been debates over how to safely drain the phosphogypsum stacks on the property. Phosphogypsum is a fertilizer manufacturing by-product that is traditionally considered more radioactive than original phosphate rock.

When asked if there will any consequences, the state says it will look into the matter after this current emergency.

"The Florida Department of Environmental Protection is prepared to -- and dedicated to the full enforcement for any damage to our state's natural resources," said Shannon Herbon, the southwest district outreach coordinator with the Florida Department of Environmental Protection. "That is definitely happening. It's just right now, our top priority is ensuring the ceasing of the breach and the protection of everyone in the area."