'You should ask them': Gov. DeSantis on Manatee vaccine 'VIP list' 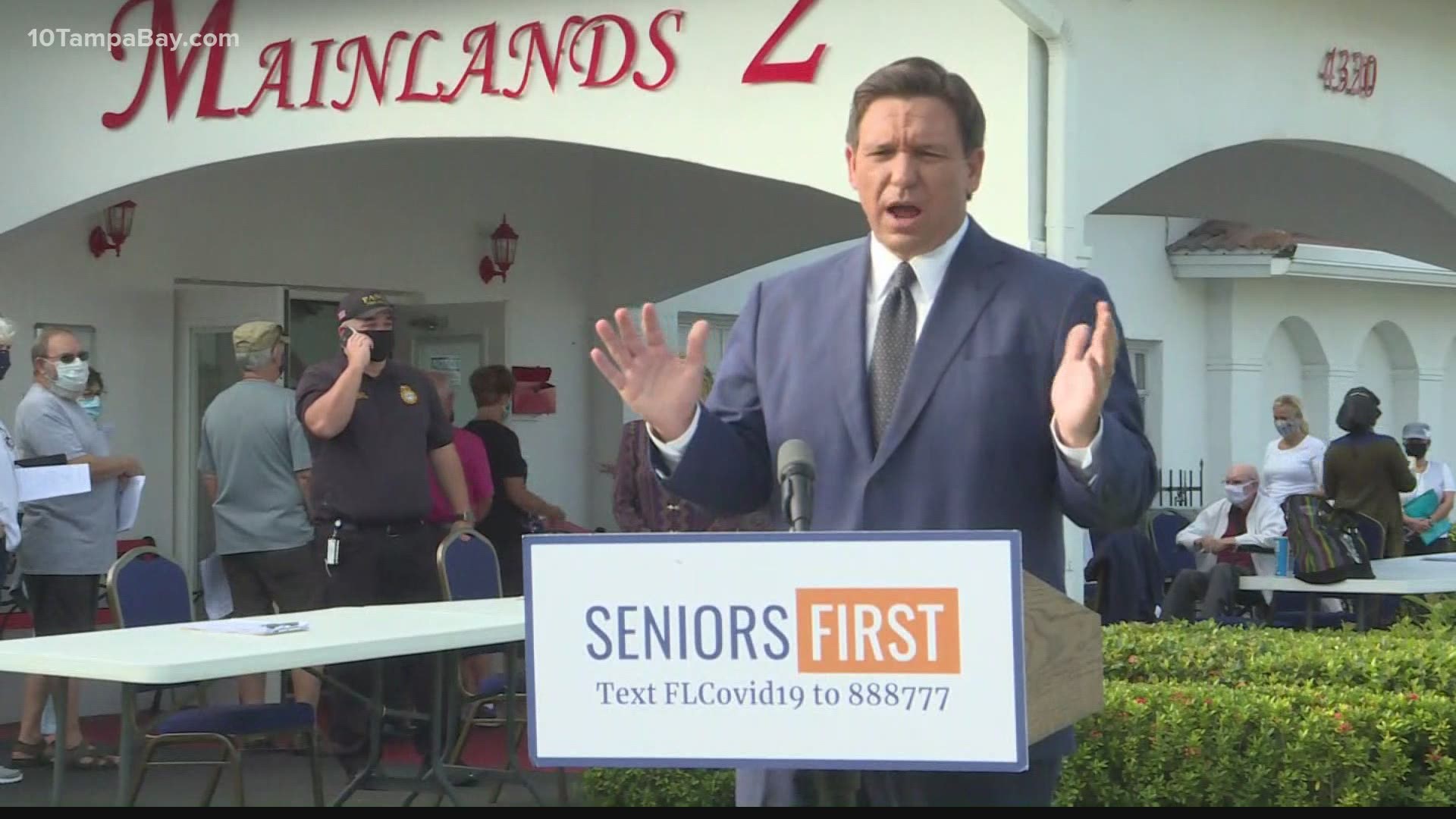 The governor announced the opening of a pop-up COVID-19 vaccination site at Mainlands Community Club House and said that the site would administer 3,000 doses of the Moderna vaccine over the next three days.

He mentioned that 42 percent of all seniors in Florida had gotten the vaccine, but only 35 percent of seniors in Pinellas County were vaccinated. This Pinellas Park vaccination site is part of an effort to bring more vaccines to counties with numbers below the state average, according to DeSantis.

The governor said Florida would be receiving an increase of 41,000 vaccines for next week from the 325,000 received last week. This includes an additional 5,000 doses DeSantis said would be coming to another site in Pinellas County.

Gov. DeSantis emphasized the continued effort to put "Seniors First" in the vaccination effort and said he hopes to expand distribution efforts through the Federal Retail Pharmacy Program.

The governor described the home-bound seniors program as a success, offering vaccines to seniors in their homes. He talked about the initiative during a Thursday morning appearance on "Fox & Friends" where a WWII veteran in Pinellas County became what he believes to be the 2 millionth senior vaccinated in Florida.

Great to be with Pinellas resident Vern Cummings today on @foxandfriends. Vern is a WWII veteran, who we believe is our 2 millionth senior to receive the vaccine in Florida. Vern and his wife Dottie are part of our Greatest Generation and I will keep putting #SeniorsFirst. pic.twitter.com/2XXK65Cq7r

DeSantis also mentioned that Florida's Moderna vaccine shipment still has not arrived due to weather-related delays.

On Wednesday, the governor faced scrutiny in Manatee County at the Lakewood Ranch pop-up site. This, after Commissioner Vanessa Baugh told commissioners she chose to give the 3,000 appointments to those who live in Lakewood Ranch's neighboring two zip codes, 34202 and 34211, during their Tuesday night meeting. This choice varies from the way the county randomizes vaccine allocation through a lottery system.

Emails obtained by 10 Tampa Bay also show Commissioner Vanessa Baugh asked for her name and four others to be added to the vaccination list.

When asked about Baugh's "VIP vaccine list" at Thursday's press conference, DeSantis said, "you should ask them."

He continued saying that the pop-up vaccination sites were filled with additional doses not included in the vaccines already allotted to each county.

"I want to apologize to all the residents who I have disappointed in any action that I've taken according to some news outlets," Baugh said.

Baugh also apologized to Gov. DeSantis but defended the decision to bring a vaccination site to Lakewood Ranch, as a majority of the residents there are seniors.

The commissioner added that she has not yet received the vaccine, despite her name being on the list.