Taylor Bland and Joshua McAdams organized a rally the same day a benefit run was held for the Johns Hopkins All Children's Hospital Foundation. 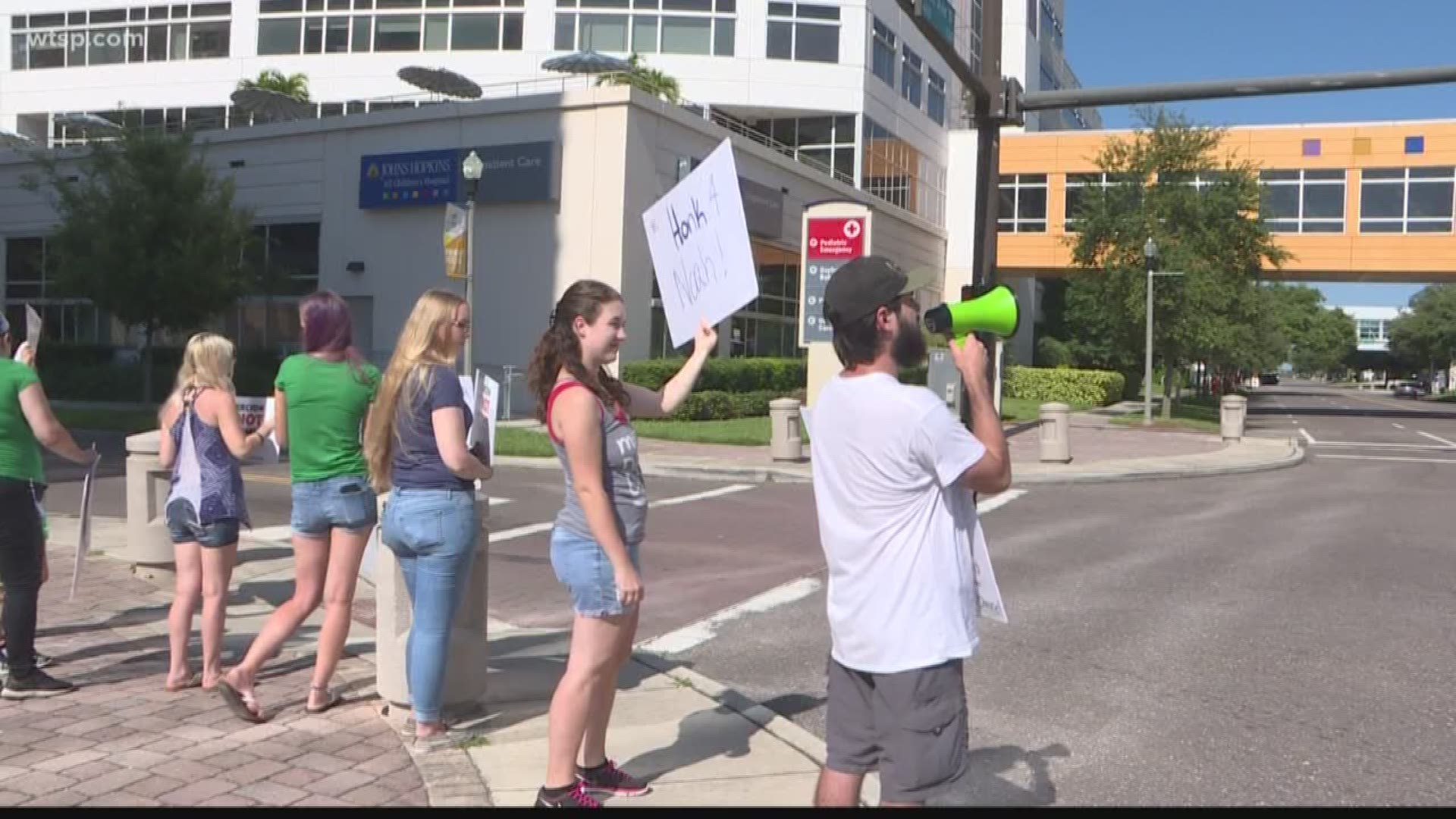 ST. PETERSBURG, Florida — About 1,700 runners participated in the annual run to benefit the Johns Hopkins All Children’s Foundation -- some with very special connections to the hospital.

The runner is in remission after a nearly two-and-a-half-year fight against leukemia, a comfort to the Gallaghers. But they know they are not alone in their struggle.

The Gallaghers crossed the finish line for Caroline’s battle with cancer, but they are speaking out because just a couple blocks away, another family continues to rail against using chemotherapy to treat their son’s cancer.

Related: Judge says parents of boy with cancer must let him have chemo

Noah McAdams was diagnosed with leukemia in April. When his parents refused chemotherapy treatment, the 3-year-old was taken into custody and a legal battle ensued. On May 8, a judged ruled Noah must continue with the first phase of chemotherapy, but holistic medicine may be pursued as well.

However, his mother says she’s been unable to make any of those appointments.

“Basically we have to get every single appointment, the date and the time, approved by the judge. So we have to fill out a motion of who we are going to see, when we are going to see them and go back to court and approve it," said Taylor Bland, "which makes it nearly impossible to actually get him in by the time that they want to see him."

The holistic treatments include things like thermal therapy and infrared therapy, as well as cannabis treatments.

The parents are determined to continue fighting.

“Why won't you let us take our son and go our way? Because you know, that we will come back and show you that our son is still alive and healthier,” shouted Joshua McAdams into a megaphone directed at the hospital's walls.

Bland recognizes they are in largely uncharted waters.

“Because there are still so many side effects he could have for the rest of his life from chemotherapy. And these other options that we’re considering, they don’t have proven studies that they are necessarily as effective, yet, but they do have way less side effects," Bland said. "And if he were to fall into relapse, for example, during the holistic medicine. We would absolutely consider taking him to chemotherapy at that point, because then we had failed."

But she is willing to take the risk. When asked, 'What if holistic medicine doesn't work out? She replied: "Yeah absolutely, so we have considered that. And that would have to be something that we live with for the rest of our lives."

Related: Parents fight to get sick 3-year-old son back after refusing chemotherapy

The Gallaghers say their daughter, who had the same form of leukemia as Noah, is proof that there is the best course of action.

“Because chemotherapy works. Because peer-reviewed science has proven this treatment course will put your child in remission. And with a 98 percent effective rate, and cure rate, why would you not?” questioned Danielle Gallagher.

Noah’s parents will be back in court Monday to discuss Noah’s court-ordered chemo treatments and whether more will be necessary, as well as the motions for alternative medicine treatment.