Investigators say Anthony Damiano told a paramedic, who was arrested earlier this week, he wanted the doses for his mother. 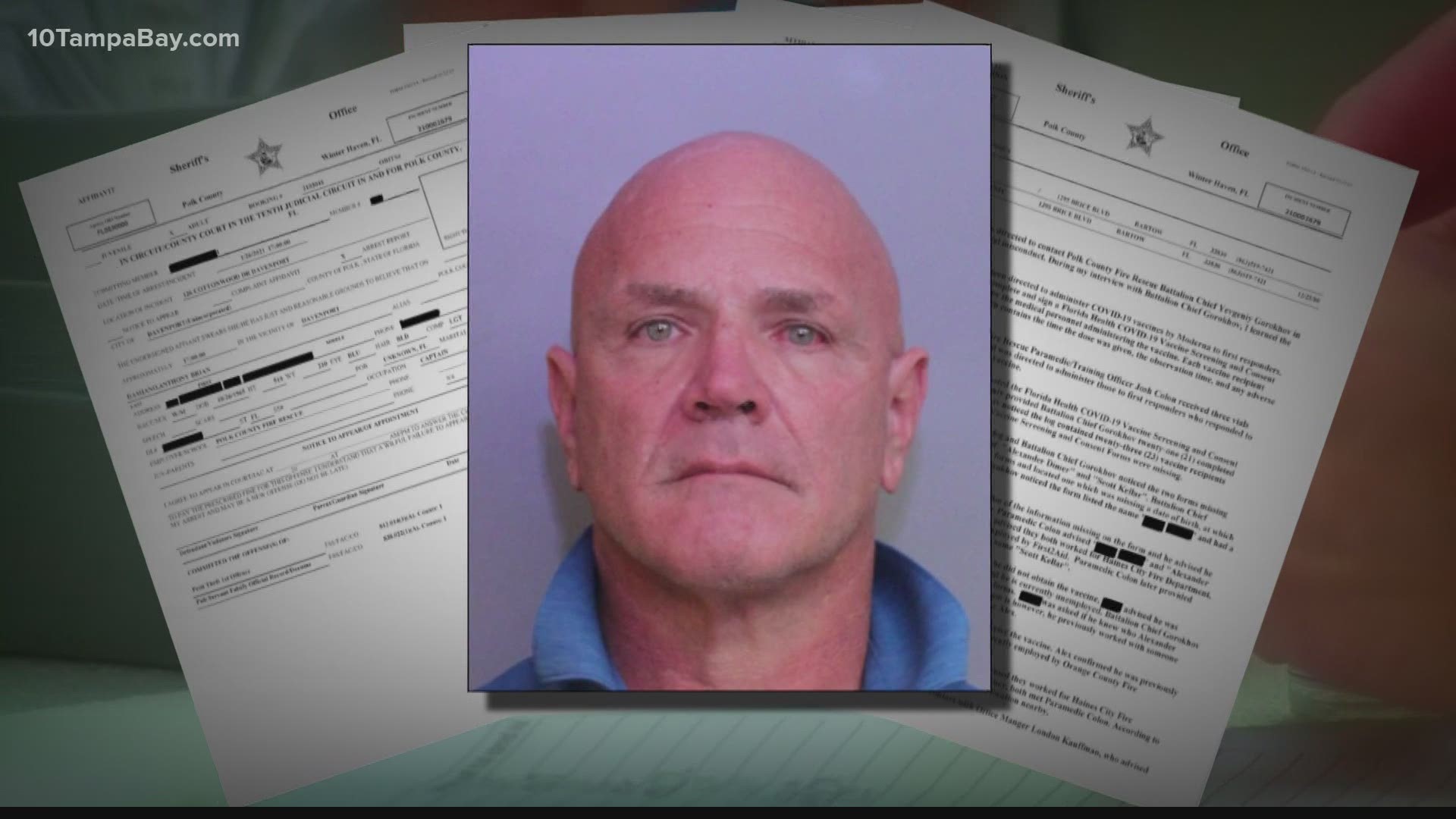 WINTER HAVEN, Fla. — A Polk County Fire Rescue captain reported to jail Wednesday on accusations he stole COVID-19 vaccines meant for first responders -- with the goal of giving the doses to his mother.

Anthony Damiano, 55, a captain for 14 years, is charged with official misconduct and petit theft, according to the Polk County Sheriff's Office. Damiano was expected to be arrested upon returning home from an out-of-state trip.

His arrest isn't the only one tied to this case, it's the second.

Colon, who was honored as a paramedic of the year in 2020, was tasked with giving first responders doses of the Moderna COVID-19 vaccine, according to an arrest report. He was told several times to provide the completed paperwork to a battalion chief after rescuers received their doses, investigators said.

But the information Colon provided, the sheriff's office said, included false paperwork, and that's what got investigators asking questions.

Colon told an investigator Damiano joked with him about giving some vaccines for Damiano's mother, the arrest report states. Colon said he refused to give him the vaccines, though Damiano said he would tell supervisors that Colon was selling vaccines outside of work in an apparent threat, according to the report.

Colon told the investigator Damiano ordered him to go on his lunch break, the report reads. The vaccines were left in a refrigerator and labeled, but when Colon got back to the station, he noticed the label tab was tampered with and three vaccines were missing, according to the report.

Colon did not report what happened to anyone within Polk County Fire Rescue, the report said. He reportedly did not feel comfortable talking with the battalion chief.

"Joshua tried to cover for the captain, Joshua set up the circumstance for the vaccines to have been stolen. Had Joshua simply gone to his boss right then, he would have been the hero, but instead, he started falsifying paper, making up people who didn’t exist to cover it up," said Polk County Sheriff Grady Judd during an earlier news conference.

Damiano admitted to taking the vaccines and told Colon to report those vaccines as if they fell off the desk at the station, he said during a monitored call with an investigator listening in, the report reads. Damiano then reportedly said the vaccines weren't used and could be picked up from his car parked at his friend's house in St. Cloud as he was on a work trip with Florida's Disaster Medical Assistance Team.

Two syringes with a clear liquid substance were found inside a clear plastic bag in the front seat of the car, the report said. The two were no longer usable while a third syringe was not found.

According to law enforcement, Damiano's mother was contacted by an investigator, and she claimed she knew her son was working to getting her vaccinated through the nature of his work. She eventually got onto a waiting list with the Polk County Health Department, the report said.

His mother reportedly claimed she never received the vaccine and believed Damiano was trying to help her get the vaccine legally.

"They knew better and violated the rules," said Judd during the conference.