Charges among those arrested range from burglary to rioting and carrying concealed firearms. 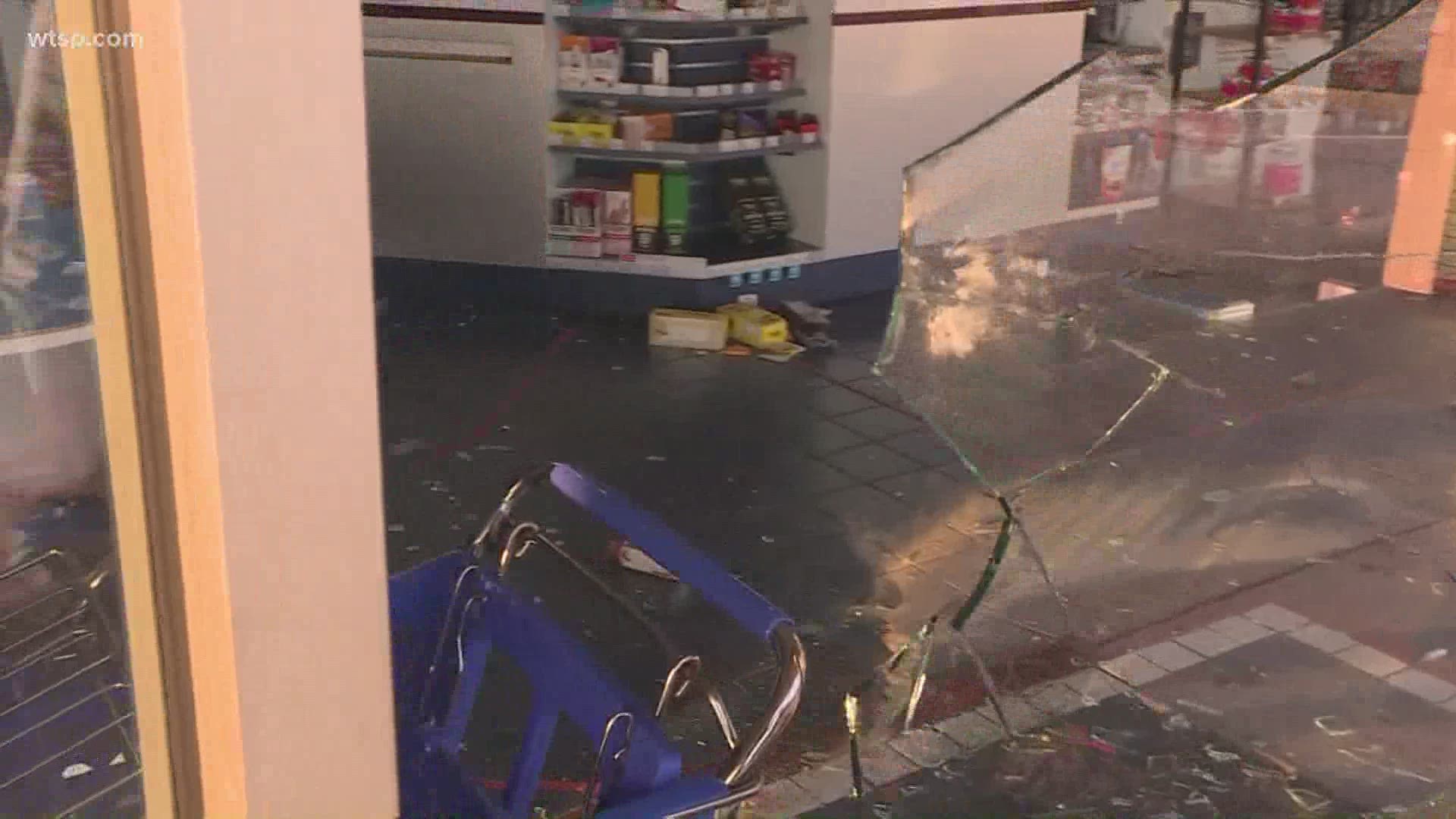 TAMPA, Fla. — Tampa Police say they arrested more than 40 people Saturday night during protests that turned into rioting and looting around the city. Demonstrators were protesting George Floyd's death in police custody in Minneapolis.

George Floyd's death has led to peaceful protests around the country, with demonstrators demanding justice. But as many protesters peacefully point to concerns about racial injustice, other individuals have created chaotic scenes near the protests, including in Florida.

Tampa Police say charges among those arrested range from burglary to rioting and carrying concealed firearms. Police say multiple businesses were looted along the Hillsborough, Busch, and Fowler corridors.

The Hillsborough County Sherriff's Office said it arrested seven people during the overnight protests. The people who were arrested were charged with burglary, grand theft, battery on law enforcement officer, carrying a concealed firearm and petit theft.

The Mobil gas station at N. 30th St and E. Busch Blvd was lit on fire, as well at the Champ's store located at N. 22nd St. and E. Fowler Ave.

RELATED: Flames shoot out of Champs Sports store in Tampa

Two Hillsborough County Sheriff's deputies were injured during outbreaks of violence in Tampa. One was hit in the head during a protest at University Mall. The second deputy was struck by a firework and burned on his arm.

“Throughout the day, the Hillsborough County Sheriff’s Office ensured the safety of those peacefully protesting,” said Sheriff Chad Chronister. “Unfortunately, as the night went on, individuals came out who were focused on chaos instead of change. I'm proud of the discipline, professionalism and focus of law enforcement who have worked tirelessly to contain and deescalate the violence that has unfolded.”

RELATED: 2 deputies hospitalized: 1 hit over head, the other hit by firework amid violence in Tampa

Chief Dugan warned peaceful protesters to stay home Sunday because the police will take an "even harder stance."

The evening scenes contrast with earlier peaceful protests in the Tampa Bay area following Floyd's death in Minneapolis. Many people assembled in front of the Tampa Police Museum in the downtown area, later continuing to protest in Curtis Hixon Park.

People chanted, in part, "no peace, no justice," and, "I can't breathe," referencing what Floyd pleaded to officers while he was on the ground and the officer's knee was pressed upon his neck.