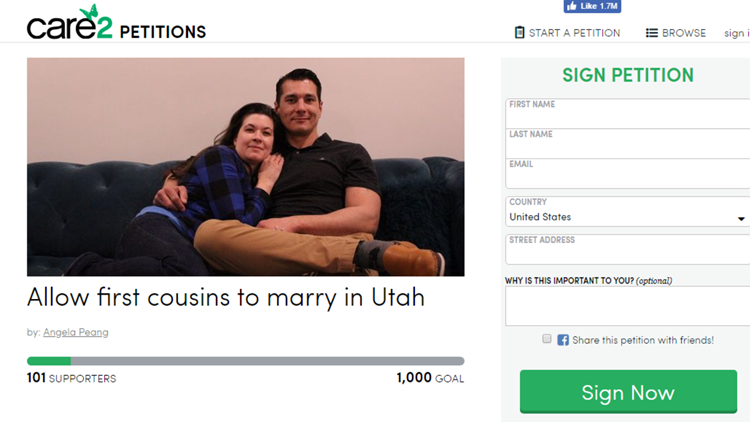 UTAH, USA — Two first cousins, who say they've been in love their whole lives, are petitioning to get legally married in the state of Utah.

"We believe that the law is outdated and it needs to be changed so that we can socially legitimize our love," Angela Peang wrote in the Care2 Petition.

The couple's goal is to get 1,000 supporters. As of Wednesday afternoon, the petition has 101 signatures.

Peang told CBS she's been in love with her cousin, Michael Lee, since second grade. CBS said her father is the oldest of 12 children. His sister, Peang's aunt, is Lee's mother.

"We just always played a lot," Peang told CBS. "We went into a closet and we were kissing and dancing together. It just felt really natural."

While cousins are not legally allowed to marry in Utah, the law is different in Colorado. CBS said Peang and Lee went to Grand Junction, Colo., on Monday to get married at the courthouse.

Peang told CBS News the family, conservative Mormons, had mixed reactions to their union. Their parents reportedly feel their love might "threaten the family's identity." Her youngest child was OK with the situation, but her two older daughters initially thought it was "weird" and "wrong," according to CBS News. Now, all the daughters have reportedly grown to accept the situation.