He worked to shore up support for the Democratic ticket, including presidential nominee Joe Biden, keeping his message Florida-centric. 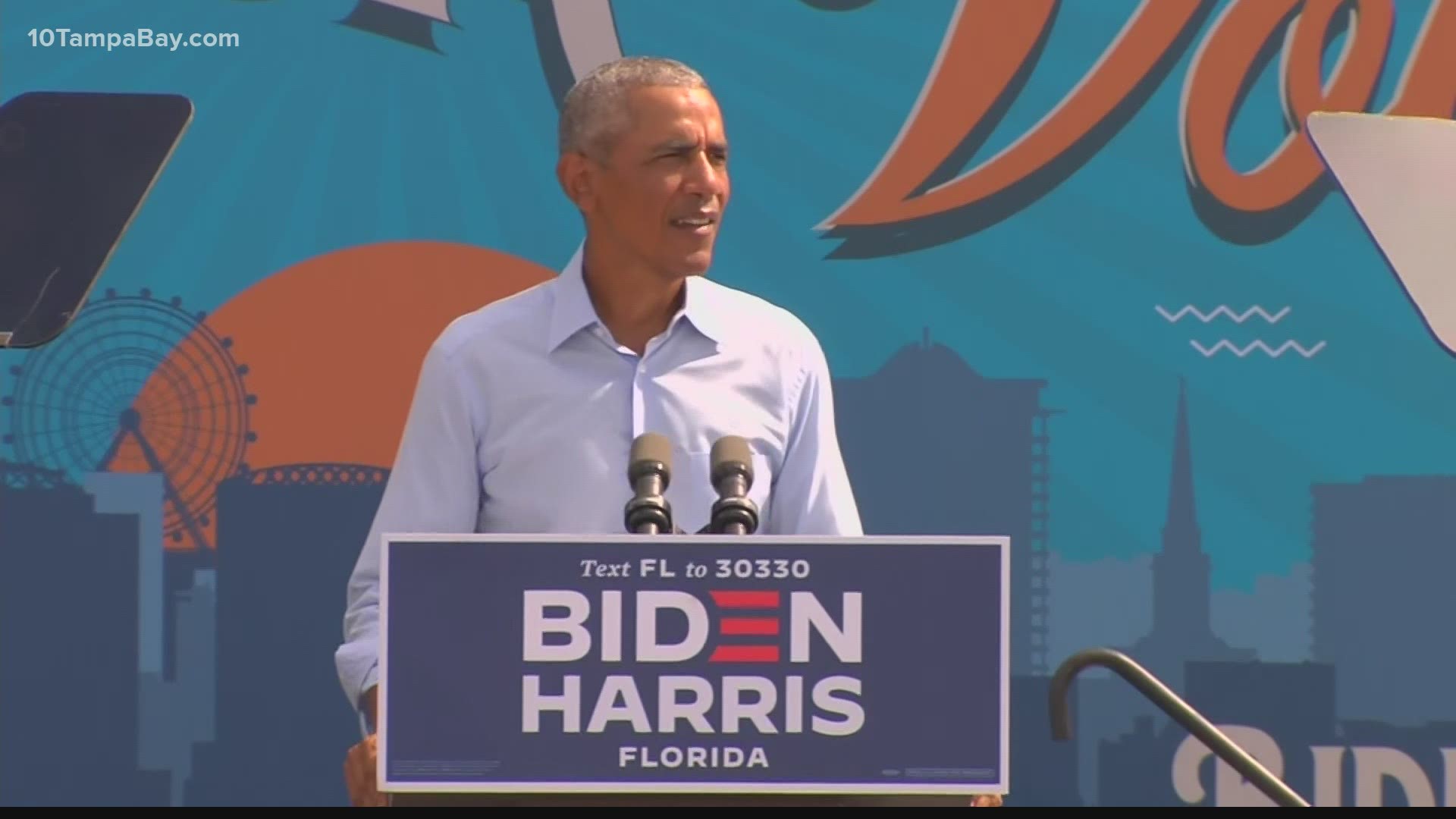 ORLANDO, Fla. — A week out from Election Day, Barack Obama visited battleground Florida to stump for his old running mate.

The Biden campaign has been trying to keep it a message positive: Unity. Health care. A plan to fight COVID19. The former president appears to be their offensive weapon.

On Tuesday, he called President Trump a liar who cozies up with dictators. Insults the military and has no plan to battle the virus. Obama also said Trump's policies have hurt America -- and Florida in particular.

“The pandemic would’ve been challenging for any president. But the idea that somehow this White House has not done anything but completely screwed this thing up is nonsense,” Obama said.

Knowing how important the state is, Obama kept his message Florida-centric.

He reminded the crowd how Florida relies most of all on Obamacare. How tourism has been crippled by the pandemic. And, he appealed to the state’s growing Puerto Rican community not to forget the Trump administration’s initial reaction to Puerto Rico after Hurricane Maria.

“Imagine a president, who after being hit by a hurricane, doesn’t respond by throwing paper towels, but says those are Americans. And we’ve got to make sure that we get them the help they need as quickly as possible. That’s what you should expect from a president. And if you’re not getting that, then you got to get out there and vote to make it happen," he said.

The former president ended with a message to supporters that, for all their enthusiasm, they needed to get out the vote. Florida is once again a toss-up state that could decide the election.

“We will establish once again with this country stands for,” Obama said. “What our values are. Who we are as a people. Let’s get to work Florida. Let’s bring it home.”

Throughout the event, people were blowing car horns in addition to cheering from a distance.

“You know, obviously we need these sorts of morale boosters,” Biden supporter Kesha Mulfort said. “These types of events to get us fired up. And when they’re done safely, they make sense.”

Obama's visit follows a trip Saturday to Miami, where he worked to rally people to get out and vote. Florida, Obama said, could decide the whole election.

"If you bring Florida home, this thing’s over," he said, according to the Miami Herald. "... I won’t have to wait for the results. I want to go to sleep knowing we’re going to have a president fighting on our behalf."

The next big event for the Biden campaign is a rally on Thursday at the Florida State Fairgrounds in Tampa.

Recent polls continue to show a tight race between President Donald Trump and Biden for Florida. According to the Real Clear Politics polling average, Biden is up 1.5 points over Trump. FiveThirtyEight's latest average has Biden up 2.4 points.