Eating fresh fish and seafood during red tide: Is it safe?

Fishermen and local seafood markets aren't having a tough time catching fresh fish. The challenge is getting people comfortable enough to eat them. 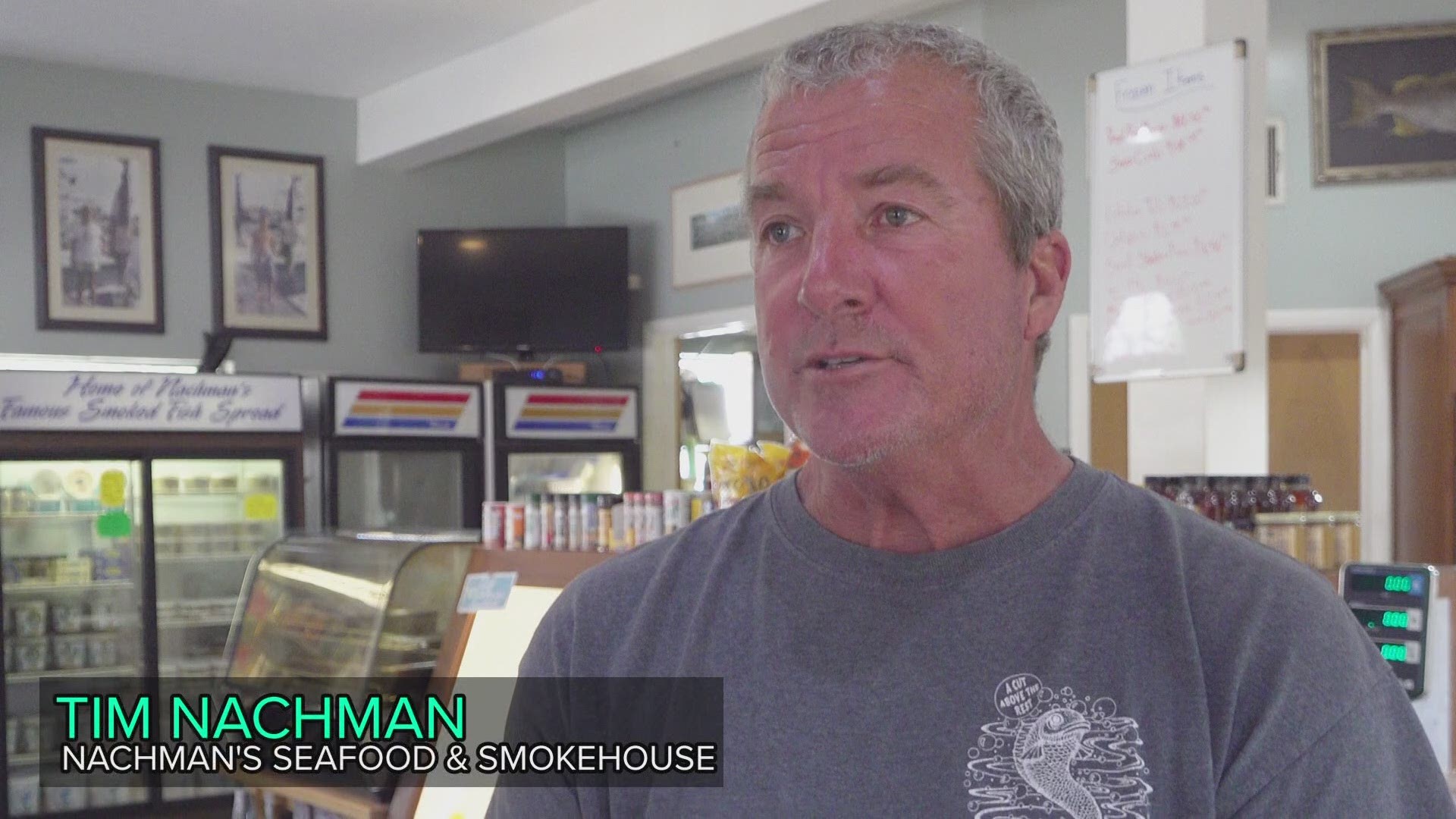 ST. PETERSBURG, Fla. — Tim Nachman, the owner of Nachman's Seafood Market and Smokehouse, sells seafood to restaurants in the Tampa Bay area, which has been hit hard by red tide.

"The way red tide affects us, it doesn't affect us as far as the fish coming in, because the fishermen go way offshore where the red tide is not," Nachman said.

People in Pinellas County have watched as more than 1,500 tons of dead fish and debris have washed up, so it is easy to understand why they might be hesitant to eat seafood. However, the Florida Fish and Wildlife Conservation Commission says some of those fears are misplaced.

Shellfish bought at seafood markets or served up at restaurants are monitored by the government for safety and tested for red tide toxins. While toxins can accumulate in the guts of finfish, FWC says those parts are tossed out when the fish get filleted and before you would find it on your plate.

"In cases where the fish is exposed to large amounts of the red tide toxin, brevetoxin, most of the time the fish are paralyzed and die of suffocation, unfortunately," Tahiraj said. "Fish that is caught live and is caught in areas of the water that are thought to be safe, if it's probably cooked and prepared, and the fish was alive and healthy, I don't think there is any reason to believe there will be any harmful impact to humans upon ingestion."

Over at Wild Seafood located at Don's Dock, owner Jason Delacruz is trying to do everything he can to let people know his seafood is safe to eat.

"The market is a communication thing, we've tried real hard on social media platforms to make it clear that how far we catch our fish offshore has no effect in the red tide issues. Even a short trip for our guys during the summer can be 80 nautical miles off the beach. That is almost from here to Orlando," Delacruz explained.

As demand drops in restaurants, interest in fishing charters is waning, too. Captain George Hastick runs charters in the bay. He says he was doing better than usual, even passing off charters to other companies. However, with red tide, the phones have stopped ringing.

"It was horrible, I've never seen it before like this. About two weeks ago, the red tide was super bad right here, and the baitfish were dying. It looked as if they were in the live well, where you've got too many baits in the live well, and there's not enough oxygen, and they're flipping and jumping out of the water," Hastick said. "They're dying right in front of my face."

Recently, he has seen conditions improve.

"Now it's beautiful. If you look, you will see bait actually sparkling and dibbling the top of the water," Hastick continued.

However, with the stigma around red tide, customers still aren't coming back.

"It's really bad for our tourism. If you have a tourist that comes in town, he's here, he stays in a condo, he comes and buys a fish to cook there, but he sees all the dead fish floating by," Delacruz said. "It's a whole conversation we have to build to prove to them our fish are okay, the species that we harvest are okay, but it's just bad for everybody when they walk down the beach with dead fish."

Wild Seafood at Don's Dock is a Gulf Wild dealer. Gulf Wild is a nonprofit that is run by commercial fishermen. They have come up with a way for you to know exactly where your fish came from.

While it is safe to eat fish sold at local businesses, these fishermen agree the stigma may not go away until we see clean waters again.

"It's really bothersome that we, as a fish house, as fishermen, go out of our ways to protect our species and take additional conservation measures on ourselves so that we're doing the right thing by the stock," said Delacruz. "Yet, other things happen that affect our fish."

The bay serves as an estuary for many young fish before they head out to the open ocean. Without clean water, fishermen say they may see less fish offshore in several years due to this red tide.