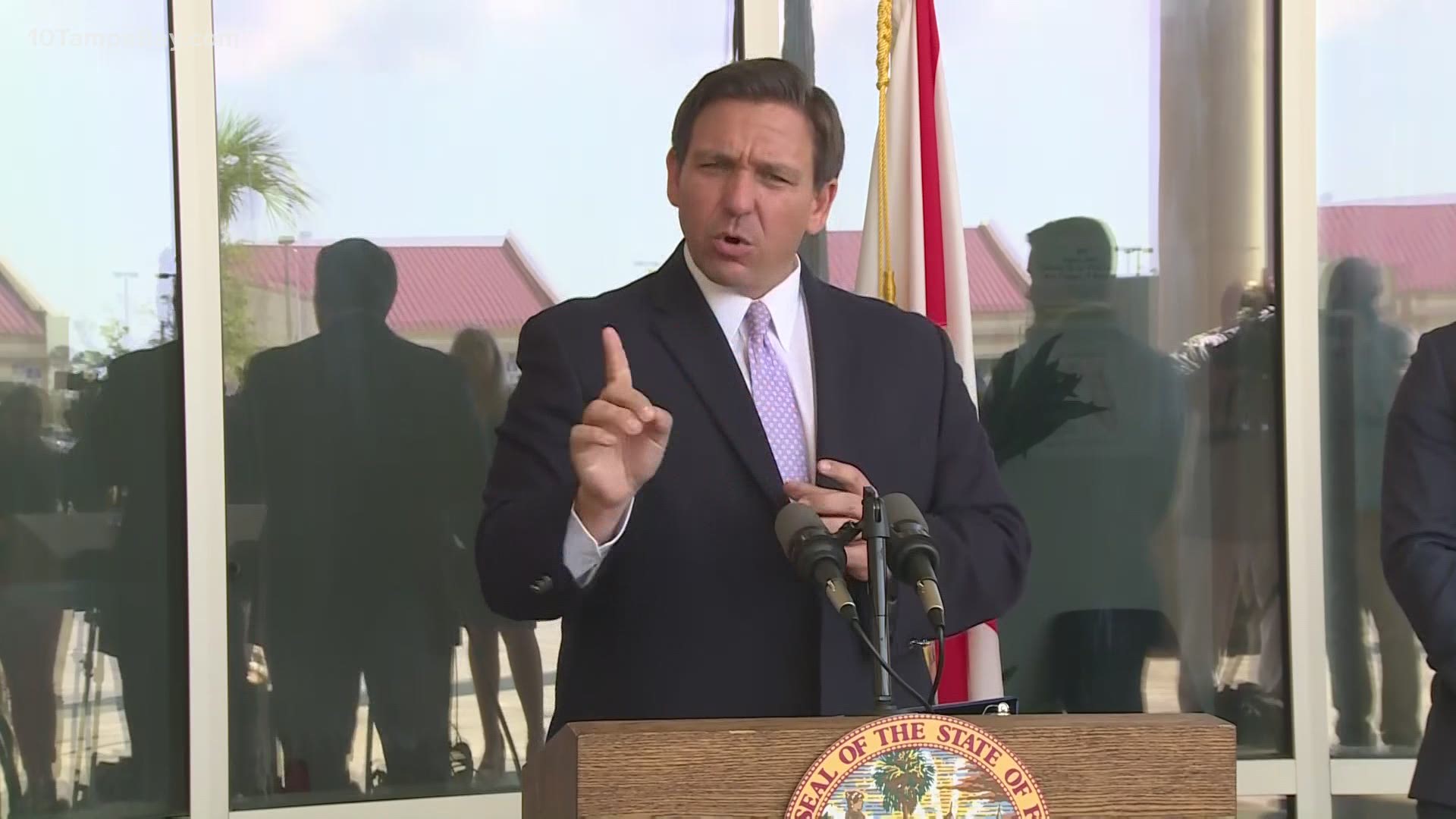 After a question came in about the investigation, DeSantis laughed and claimed the series "cut out everything that proved their narrative was a piece of horse manure."

In its report, 60 Minutes says it covered vaccine inequity in one of Florida's largest counties, Palm Beach County. 60 Minutes says "some wealthy and well-connected residents cut the line" to vaccination and left others, often those with low incomes, "without a fair shot."

DeSantis went on to say the report is why people can't trust corporate media.

The governor claimed 60 Minutes was offered the information to disprove their story but they declined to interview those people.

In Dec. 2020, Gov. DeSantis broke with CDC guidelines and focused on a "seniors first" approach, citing the large senior population the state has compared to the rest of the country.

To help with vaccine distribution, in January the governor announced an expanded partnership with Publix pharmacies in giving out shots.

The report also says in the past, Julie Jenkins Facelli, heiress to the Publix fortune, has given $55,000 to the governor's PAC. And, her brother-in-law donated $25,000 in November.

DeSantis said at the press conference "you can tell it's New York corporate media when you come to Florida and attack Publix."

He called the supermarket chain one of the most popular brands in the state.

"It would have been malpractice to cut Publix out of assisting," DeSantis said.

The governor called the accusation that only Publix was getting the vaccine was a "total crock" and said it was "nonsense."

DeSantis said 60 Minutes was told their claim about Publix was nonsense, but "they cut that out, they spliced it because they can't handle the truth."

DeSantis said that if 60 Minutes had put out everything they were given from state leaders, they wouldn't have a story.

>You can read a statement from Publix here.

"They went for the smear and they've been caught red-handed," DeSantis said.

"Unless you're a partisan leftist, do not trust corporate media. You can't trust them, they're not trustworthy. They will lie, they will smear and then they just move on to the next target and think they are going to be able to get away with it. You ain't getting away with it here, OK? You come down to our state and you try to smear people, we're going to bite back, and we're going to hold you accountable. This is not over by any stretch of the imagination."

60 Minutes has since responded. A CBS News spokesperson released the following statement:

“When Florida state data revealed people of color were vaccinated at a much lower rate than their wealthier neighbors, 60 MINUTES reported the facts surrounding the vaccine’s rollout, which is controlled by the governor.  We requested and conducted interviews with dozens of sources and authorities involved. We requested an interview with Gov. Ron DeSantis, he declined. We spoke to State Emergency Management Director Jared Moskowitz twice, but he declined to be interviewed on camera for our story until well after our deadline. The idea we ignored their perspective is untrue.  Counter to his statement yesterday, we also spoke on the record with Palm Beach County Mayor David Kerner. For over 50 years, the facts reported by 60 MINUTES have often stirred debate and prompted strong reactions. Our story Sunday night speaks for itself."

In February, DeSantis announced 3,000 doses were going to seniors in the up-scale Lakewood Ranch community. The governor claimed the state chose areas where the vaccination rate was lagging.

The distribution decision is one that raised red flags for some Manatee County commissioners who expressed their gratitude for the additional supply but wanted a more equal distribution.

Then, County Commissioner Vanessa Baugh admitted she picked the vaccine site and even put herself and a few others on the list to get shots. This went against the county's random lottery system.

The governor was in Panama City to talk about funding to help rebuild after Hurricane Michael.

You can watch the entire press conference here: