Florida's governor has faced criticism over vaccine distributions at sites including Lakewood Ranch in Manatee County and those in the affluent town of Palm Beach. 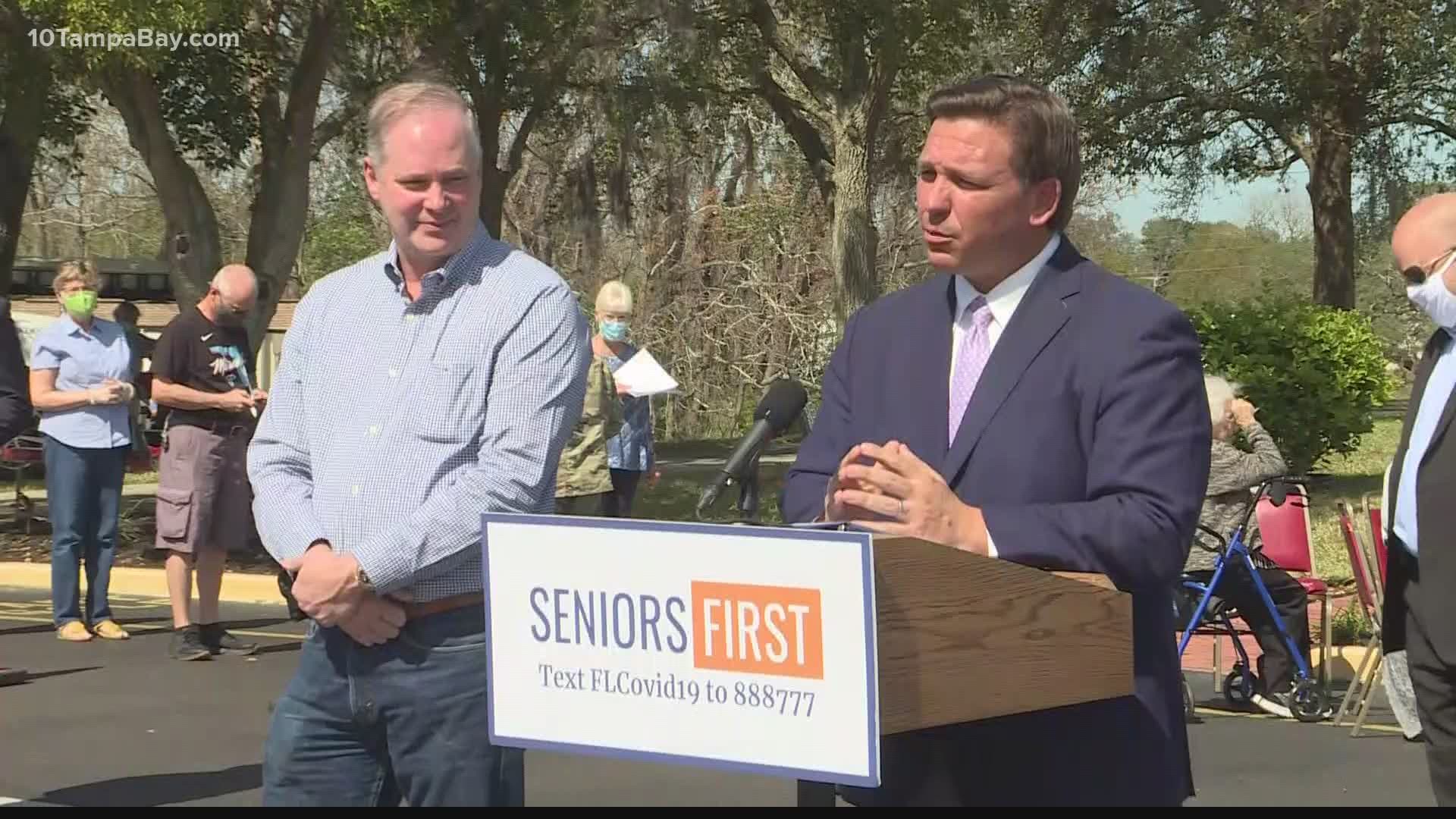 TALLAHASSEE, Fla. — Editor's note: The above video is from Feb. 24.

As Florida prepares to open vaccine eligibility to everyone in the state 16 years and older, Gov. Ron DeSantis' vaccine distribution is still under some scrutiny.

In its report, 60 Minutes says it covered vaccine inequity in one of Florida's largest counties, Palm Beach County. 60 Minutes says "some wealthy and well-connected residents cut the line" to vaccination and left others, often those with low incomes, "without a fair shot."

In Dec. 2020, Gov. DeSantis broke with CDC guidelines and focused on a "seniors first" approach, citing the large senior population the state has compared to the rest of the country.

To assist with vaccine distribution, in January the governor announced an expanded partnership with Publix pharmacies in giving out shots.

The report also says in the past, Julie Jenkins Facelli, heiress to the Publix fortune, has given $55,000 to the governor's PAC. And, her brother-in-law donated $25,000 in November.

"The irresponsible suggestion that there was a connection between campaign contributions made to Governor DeSantis and our willingness to join other pharmacies in support of the state's vaccine distribution efforts is absolutely false and offensive. We are proud of our pharmacy associates for administering more than 1.5 million doses of vaccine to date and for joining other retailers in Alabama, Florida, Georgia, South Carolina, Tennessee and Virginia to do our part to help our communities emerge from the pandemic."

10 Tampa Bay has also reached out to Publix and the governor's office. We are waiting to hear back.

Alfonsi says DeSantis declined an interview to talk about the Publix deal. Instead, Alfonsi attended a news conference in Orlando to ask him if his decision to work with Publix to widely distribute vaccines was "pay-to-play."

In his response, the governor said the state had been working with CVS and Walgreens pharmacies since December to administer vaccines to people in long-term care facilities. As those pharmacies worked on to complete that "mission," DeSantis said that in addition to county and drive-thru vaccine sites, the state wanted to open distribution more widely in communities.

Because of this, the governor said the state reached out to other retailers, including companies such as Walmart and Publix, and Publix was the "first to raise" its hand and say it was "ready to go."

"And you know what, we did it on a trial basis, I had three counties, I actually showed up that weekend and talked to seniors across four different Publix [stores and asked] 'How was the experience?' 'Is this good?' 'Do you think this is the way to go?'" He said at the news conference. "And it was 100 percent positive. So we expanded it, then folks liked it."

DeSantis singled out Palm Beach County as an example of Publix pharmacies benefitting its senior population to vaccinate them.

He went on to say, "I met with the administrator. I met with all the folks in Palm Beach County and I said, 'here are some of the options. We can do more drive-thru sites. We can give more to hospitals. We can do the Publix.'"

DeSantis said county leaders said most residents lived within about a mile or a mile-and-a-half from a Publix. And they said, "We think [Publix] would be the easiest thing for our residents."

"What you're saying is wrong," Gov DeSantis tells Sharyn Alfonsi in response to a question about whether the Publix grocery store chain gained influence through a campaign donation on his behalf. "It's wrong. It's a fake narrative," he says. https://t.co/gyrW9hYPTg pic.twitter.com/5rBq7v5VOA

60 Minutes pointed out that people living in Belle Glade, which has a large Black and Hispanic population and is one of the poorest communities in Palm Beach County, were about 25 miles from their nearest Publix. For those without transportation, 60 Minutes said it would take people 34 stops and more than two hours round-trip on a bus to make it to the store and a vaccine appointment. "A daunting task in the middle of a pandemic, especially if you're elderly," it said.

In Belle Glade, Florida, many residents don’t have cars. In January, Florida’s governor announced a partnership with Publix grocery stores to distribute the vaccine in their pharmacies. The nearest Publix to Belle Glade is about 25 miles. https://t.co/MjCLsLA8Bp pic.twitter.com/y3iJkBxm0r

DeSantis has also faced criticism and accusations of "corruption" based on the vaccine distribution at Lakewood Ranch in Manatee County.

In February, 10 Tampa Bay reported Manatee County Commissioner Vanessa Baugh selected two specific ZIP codes for the pop-up vaccination site and also asked to put herself and four others on the list of those getting the shot.

Individuals angered by the action of placing a vaccination site at one of Manatee County's wealthier and predominantly white communities called for her resignation. Commissioners voted 4-3 against a motion to ask for her resignation and she is still currently serving the county.

In light of the controversy, Democratic U.S. Rep. Charlie Crist called upon the Department of Justice to investigate the governor and whether the state's vaccine sites are being used to "benefit political allies and donors."

In his letter, Crist points out that Lakewood Ranch's parent company is owned by Rex Jensen, "one of the Republican donors in the country." The representative also notes Jensen has contributed more than $900,000 to DeSantis.

Similarly, Agriculture and Consumer Services Commissioner Nikki Fried, Florida's highest-ranking elected Democrat, called for an FBI investigation into the state’s COVID-19 vaccination plan. In March, she accused Gov. Ron DeSantis of using the pandemic to rake in campaign contributions in exchange for special treatment when it comes to accessing the vaccine.

“If this isn’t a public corruption,” said Fried, “I don’t know what it is.”

However, at the time, the governor doubled down several times, insisting there was no preference given to the wealthy and predominantly white community when the location was selected.

“Look, I mean if Manatee County doesn’t like us doing this then we are totally fine with putting this in counties that want it. And we’re totally happy to do that," DeSantis said at a news conference in February.

10 Tampa Bay has also reported that Florida has fallen short on its goals for vaccine equity. In the latest data from the Kaiser Family Foundation, Black Floridians make up 7 percent of vaccinations in the state. However, they account for 17 percent of deaths due to coronavirus.