Spring break has gotten out of hand in some spots, leading to a curfew in areas like Miami Beach. 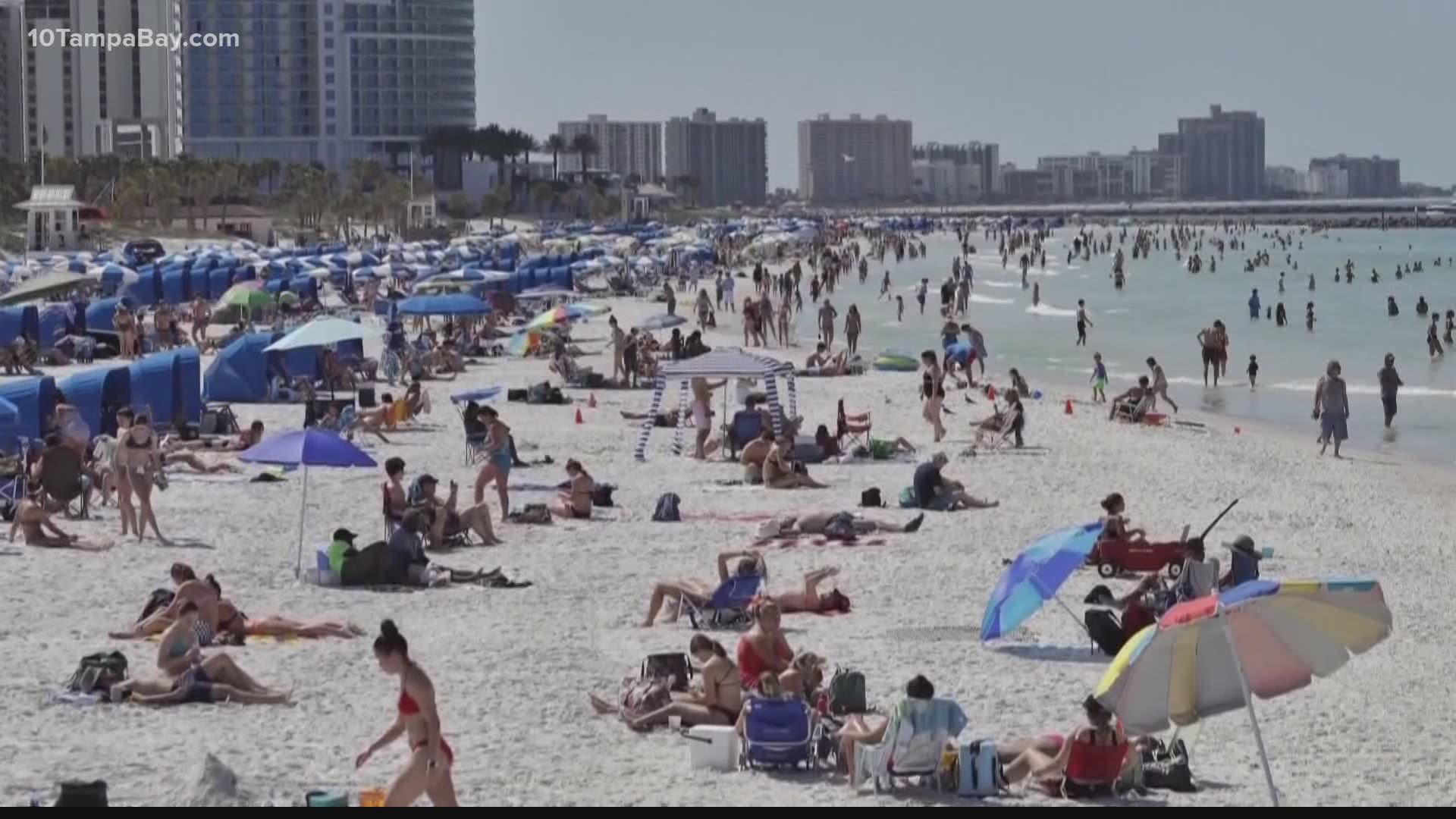 FLORIDA, USA — Public safety and tourism workers are keeping a close eye on what’s happening down in South Florida.

Spring break has gotten out of hand in some spots, leading to a curfew in areas like Miami Beach.

So, does that mean we could see a wave of disappointed vacationers heading to Florida’s West Coast instead of looking for a more inviting combo of sand and bars?

“We are double-checking,” said Visit St. Pete/Clearwater CEO Steve Hayes. “I mean, we are looking at not only some of our inland properties but also beach destinations to see where we are at. Are we seeing an increase in last-minute bookings?”

What tourism promoters would prefer to avoid is a repeat of last year, when Bay Area beaches were shamed on social media for appearing to be unsafely overcrowded.

“And that’s the message that we have to get out,” said Hayes. “Because again, at the end of the day, we like the business, but we want it done in a responsible way.”

“We’ve seen some of the footage from the spring break events that are occurring,” Castor said at a vaccination event in Tampa. “So, everyone that can be vaccinated needs to get vaccinated now.”

A few weeks ago, Clearwater Police Chief Dan Slaughter was already sounding the alarm about an increase of police calls along the beach. He supported the idea of shutting things down at 1 a.m. instead of 3 a.m.

Instead, Clearwater city leaders said they would give it six months to see if things improved.

Even without a curfew-fueled migration, local beaches have already seen a handful of bad-behavior-gone-viral cases.

They include a spring breaker sprung from the back of a Clearwater police cruiser. And over the weekend two teens were charged with battery on a lifeguard.

“We don’t want our beach to turn into a place that has a solid reputation of not being family-friendly,” Chief Slaughter had warned. “And so, then we only become that location where it’s a party atmosphere.”

Of course, for people to come here, they’ve got to have someplace to stay, and that may be the greatest obstacle standing in the way of spring breakers looking to switch coasts. Rooms are scarce.

“There might be some,” said Hayes. “But I don’t think to the amount that you saw of what could visit from a South Florida.”

While tourism workers say there is still some occupancy at what they referred to as “inland properties” like downtown Tampa, along the beach they are seeing occupancy of greater than 90 percent.

That’s their highest level since the beginning of the pandemic.

RELATED: 'We got a problem?' 2 teens charged with battery on Clearwater Beach lifeguard

RELATED: 18-year-old arrested after running out of police car on Clearwater Beach: Police